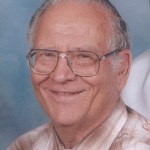 Funeral services for Robert C. “Bob” Shelley, 80, Lawrence, will be 10 a.m. Thursday at Rumsey-Yost Funeral Home. Burial will be in Sutton Cemetery.

He was born October 25, 1934, in Lee’s Summit, Missouri, the son of Charles E. and Sylvia M. McManness. He graduated from High School and began his apprenticeship as a plumber in 1953.

He worked for and retired from Huxtable & Associates Inc. as a plumber. He later went to work for the University of Kansas as a pipefitter, retiring in 2010.

Mr. Shelley enjoyed gardening, fishing, camping, and water skiing. He also was a member of the First Baptist Church.

He was preceded in death by his parents; wife; son, Robert Shelley; and daughter, Deborah D. Shelley-Hibbs.

The family suggests memorials to Medicalodges Eudora Activity Fund or Grace Hospice, sent in care of the funeral home.

From Libby and Tim Keogh...

Our condolences to Bob’s family and friends. We feel fortunate to have been Bob’s neighbor and appreciate his love of gardening and his generosity to share what he grew.

I will treasure the time I was able to spend with Bob and Dee. Bob was a good friend during the days at KU. He will be greatly missed by myself and my husband.

Aunt Dee and Uncle Bob were always so fun to be around. I remember the laughs and teasing way they had when we visited as kids. They always put up with our antics very well….right Eddie….
I will miss them both, but now they are together once again.
We love and miss you.

Ed, so sorry to hear about your dad. I have many memories of time spent with your family through out the years. Our dads were great friends for a lifetime.

Dear Shelley Family, Your father was very dear to my heart. I always enjoyed our talks when he came in to my office. He was such a good man, sweet and gentle in his actions and so devoted to his wife. I am sorry he is gone but I am happy that he is with his beloved wife again. RIP Mr Shelley I will miss you very much!

Bob was a great neighbor and wonderful person. My prayers to the family.

My deepest sympathy to all. He was a wonderful man , father, and husband. He will be missed but not forgotten. R.I.P. and be with God.

Sorry to hear about Bob….Worked with Bob for over 20 years at KU. darn good worker and smart man. He knew his job. Enjoyed working with him. May he rest in peace.

Our deepest sympathy to Ed, Dee Dee and family. May Bob rest in peace as now he is with the love of his life eternally, amen.