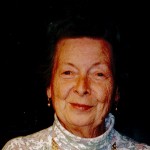 Services for Elizabeth “Betty” Josephine Brune, 86, Lawrence, will be at 11:00 a.m. Friday at Rumsey-Yost Funeral Home. Cremation will follow the service.

Mrs. Brune died Monday, December 27, 2010, at her home.
She was born January 9, 1924, in Hays, Kansas, the daughter of Joseph Jesse Svoboda and Florence Clara Saindon Svoboda Jilka. Betty graduated from the University of Kansas.

Mrs. Brune was an elementary school teacher for many years in the Lawrence area, teaching at Fairview, Cordley, Centennial, and Broken Arrow. She enjoyed gardening, bird watching, reading, and music.
She married Danny Rothwell Brune November 6, 1943. He died in March of 2007.

She was preceded in death by her parents, three brothers (Joe, Jr., Lloyd, and Floyd), and husband.

To the Brune family: Please know that you all are in my thoughts and prayers in this difficult time. I was unable to attend the services but I had the wonderful experience of knowing both Betty and Danny Brune and feel very fortunate for meeting them. They are now together resting peacefully in gods hands. God bless you all.

With our deepest sympathy for the loss of your loved one. The friends and co-workers of Albert Brune wish to extend our condolences and prayers to you at this time.