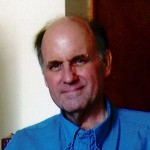 David Brooks died Saturday, January 1, 2011 at his home in Lawrence, Kansas, after a long battle with cancer. David was born April 14, 1953 in Holton, Kansas. His father, Norman R. Brooks, preceded him in death in 1988. Survivors include his mother and stepfather, Doris and Kenneth McCartney, Wichita, Kansas; stepmother, Delma Brooks, Belton, Missouri; one brother Byron R. Brooks, Overland Park, Kansas; Sisters; Sheryl Davis, Wichita, Kansas; Vel Spahr, San Diego, California and Ceanna Ryndfleisz, Grand Junction, Colorado. Also very special to David were his aunt and uncle, Shirley and Frank Leslie of Lawrence.
David was long time resident of Lawrence and worked many years at Lawrence Paper Company. Drag races, photography and electronics were of special interest to David. David’s family would like to express heartfelt appreciation to Sharon E. Soule MD, Dona M. Snead LSCSW and the entire Oncology Center staff, volunteers and anyone else at Lawrence Memorial Hospital that contributed to his care. Because of the loving care provided they became his extended family.
The family suggests memorials to the American Cancer Society, sent in care of the funeral home, 601 Indiana, Lawrence, KS 66044.
Online condolences may be sent at rumsey-yost.com

From Wayne and Sue Spellman...

We could hardly believe that Dave was gone from this earth. We lived next door to him in Gaslight Village for many years. He was a great guy and he was a wonderful neighbor. He always spoke kind words about people and especially his Uncle Frank. Dave had a really good heart and would do anything for anyone.
We will miss him, but we are glad that he no longer has to suffer.

David touched our hearts and will be missed by his “second family”. His “first family” is in our thoughts and prayers. It was an honor and privilege to get to know him. I am very sorry for your loss.

From Joyce and Carlos Cole...

no words will express how sad we were to hear about Dave. He was a special friend to us both. Carlos and Dave still kept in touch after they no longer worked together. Our thoughts and prayers go to each and everyone of you. He will be missed.

I was stunned to learn of his passing. I have lived across the street from him for 5 years. He was always quite, but always waved to me as he drove by. I kinda came to his rescue one day this last summer when some people were giving him trouble in front of his home. I stopped that in its tracks and they moved on. But he reached out to me with a huge smile and big handshake and thanks for helping him.Thats the first time I had actually visited with him, but I had made a new friend and that was a wonderful gift. I will iss him and his smiles and daily waves as he went to work.

Words can’t describe how sorry I am that David has passed away. He was such an incredible man with an incredibly big heart. He truly gave so much when those around him didn’t expect it. I feel as if I was part of his second family here in the Oncology Center. I looked forward to taking care of him and just listening to his many stories. And there were some good ones!Seeing him grin just made my day. It was a privedge to have taken part in the care of this truly remarkable man. He will always have a special place in our hearts and will never be forgotten. Peace be with you. I am truly so sorry for your loss.
Sincerely, Debby McNemee,RN

I will miss David forever!! He was such a special man and my heart hurts knowing that he is gone. I took care of him at the Oncology center and I treasured every moment that I got to spend taking care of him. His tough outer shell was nothing compared to the giant soft heart he had!! He was an amazing gentle giant and it was truly a privelege and honor to get to care for him. I looked forward to the days that he came in so that we could share in our talks–whatever they would be. I hope that you can find comfort in knowing that he is with our Savior and that he is no longer suffering. I know that I look forward to seeing him again someday. Blessings to you all. I enjoyed meeting some of you in the clinic. Peace and comfort…Bonnie Thurlow, RN