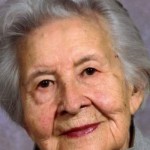 Lolita (Lolly) Brooks Coffin Longtime Lawrence resident, Lolita (Lolly) Brooks Coffin, 93, passed away on April 18, 2012 in Durango, Colorado, where she had lived for the past ten years. Lolly was surrounded by her loving family, who grieves her passing, but is comforted by the blessings of her long life, her adventurous spirit, her loving care and knowing she was welcomed home by her husband, Tony, who preceded her. Lolly is survived by sons Doug Coffin (Kaaren) of Abiquiu, NM; Barry Coffin of Lawrence, KS; Tom Coffin (Julia) of Scottsdale, AZ; and Lynn Coffin (Carly DeLong) of Durango, CO; grandsons Michael Worsham, Brian Coffin, Erik Coffin (Meryl), and Gabrial Coffin; great-grandchildren Ashley Worsham, Miro Coffin, and Paloma Coffin; niece Betty Stone (Paul) of Vienna, VA; and nephew Bob Hardage (Sherry) of Houston, TX. Lolly was preceded in death by her husband, Warner A. Tony Coffin, Jr. of Lawrence, KS; parents John Brooks and Bettie Chisholm Brooks of Dustin, OK; brothers Jim Brooks, Claude Brooks and Arthur Brooks; sisters Marie Robinson, Lovie Brooks, Lena Hardage and Montilene Jacoway. Lolly was born in Dustin, OK on Feb. 24, 1919. After graduating from Dustin High School, she attended Haskell Institute, graduating in 1941. She entered civil service and worked from 1941 to 1944, serving in Muskogee, OK, Albuquerque, NM, Chicago, IL and Washington, D.C. Lolly married Lt. Warner A. Coffin, Jr. (USN), son of Warner A., Sr. and Margaret Wabaunse Coffin, on June 12, 1944 in Kansas City. Lolly and Tony raised their four sons at Haskell Institute (now Haskell Indian Nations University) where Tony was Coach and Athletic Director for many years. After Tonys passing in 1966, Lolly worked at Haskell until her retirement. Lolly was an intrepid and adventurous world traveler, visiting over 48 countries during her lifetime. Her ever-present spirit of curiosity and love of life took her to many exotic places, often with one of her sons. She was up for anything, whether it was cruising the Nile in Egypt, exploring in Tibet or riding a jitney in Bangkok. An avid bridge player, Lolly played with her many good friends all her life. Lolly attended St. Johns the Evangelist Catholic Church in Lawrence. Lolly moved to Durango in 2002, where she continued her active life and travels throughout the U.S. She took her greatest pleasure in the accomplishments of her sons and attended many events with them, from down home barbeques to elegant art world affairs, to state capitols, to the White House. An avid sports fan, Lolly never missed watching her son Lynn at tennis matches or a Jayhawks basketball game. A graveside service will be held at Mount Calvary Cemetery, 1605 Oak Hill Avenue, Lawrence, KS 66044 on Thursday, April 26, 2012 at 2:00 p.m. followed by a celebration of Lollys life at the 23rd Street Brewery located at 3512 Clinton Parkway, Lawrence, KS. In lieu of flowers, the family asks that a donation be made to the Haskell Alumni Association, 155 Indian Ave., Lawrence, KS 66046, (785) 832-6627. Arrangements are being handled by Rumsey-Yost Funeral Home in Lawrence.

To the entire Coffin Tribe: We send you our love,as you honor and remember Lolly. She has touched all of us with her grace, humor and integrity. Her God-spark inspires us still; Her walk on Earth a gift and blessing; Her dance in the spirit-world sublime!
Faith & Miguel