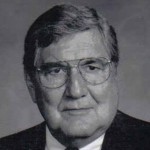 He was born in Columbia, Missouri, on December 18, 1930, to Lawrence T. and Minnie S. Ralston. In 1944 the family moved to Kansas City, Missouri, where he graduated from Southwest High School in 1948. He earned an Associate Degree from Kansas City, Kansas, Junior College in 1950 and a Bachelor of Music degree from the University of Kansas in 1952. He earned a Master’s degree in Music Education in 1958 and a Ph.D. in Music Education in 1973, both from the University of Kansas.

Dr. Ralston served in the U.S. Navy from 1952 to 1956 and remained in the Naval Reserve program, retiring as a Commander, USNR-R in 1974. He taught choral music at Washington High School in Kansas City, Kansas, from 1956 to 1962. Ralston joined the faculty of the University of Kansas in 1962 as a visiting lecturer in choral music. The following semester he was a graduate assistant in the School of Education. He was appointed assistant professor in choral music in 1963 and became a full professor in 1978. He retired from KU in 1994.

Professor Ralston also served as Chair of the Department of Ensembles at KU from 1976 to 1983; from 1983 to 1994, he was Director of the Choral Division. He was also associated with the Midwestern Music camp beginning in 1964. During his tenure at KU, Dr. Ralston worked with eminent choral directors such as Donald Swarthout, Clayton Krehbiel, and Robert Shaw. His choirs also performed with the Kansas City Philharmonic, the Kansas City Symphony, and the Wichita Symphony. They also performed for the conventions of Kansas Music Educators Association, Music Educators National Conference, and American Choral Directors Association.

During his career, Ralston was actively involved in the preparation and performance of many new works, mostly in conjunction with the Symposium of Contemporary Music at the University of Kansas. Included among the many composers were Lukas Foss, Norman Dello Joio, Vincent Persichetti, Gunther Schuller, and Libby Larsen.

In nearly forty years of service to music and music education in the state, he conducted over fifty concerts of major choral works at KU, more than thirty Vespers performances, and taught choral music to students numbering in the thousands. In 1997 he was inducted into the Kansas Music Educators Association Hall of Fame.

Dr. Ralston was a member of the Monday Rotary Club and served as their song leader for forty-six years. Rotary honored him as a Paul Harris Fellow. From 1956-1962 he directed the Welborn Community Church Choir in Kansas City, Kansas; in the 1960’s he was the choir director at Plymouth Congregational Church; from 1973-2008 he was the choral director for Trinity Episcopal Church. Other honors include the Federated Music Club’s 1999 Kansas Musical Family of the Year Award and the 2003 Phoenix Award in Musical Arts.

He married Susan Frederick on May 17, 1975, at Trinity Episcopal Church in Lawrence. He is survived by his wife Susan of 37 years as well as four daughters: Julie Hodges and husband David, Keizer, Oregon; Joi Monnington and husband Mark, Kansas City, Kansas; Meghan Adams and husband Nick, Overland Park, Kansas; and Natalie Wilemon and husband Zane, Austin, Texas. Dr. Ralston also leaves thirteen grandchildren and six great-grandchildren. He was preceded in death by a brother Robert T. Ralston and a sister Jean Barns.

Memorials may be made in his name to Trinity Episcopal Church and to KU Endowment for a graduate scholarship in choral conducting. Contact KU Endowment, P.O. Box 928, Lawrence, Ks. 66044 A memorial concert at KU will take place in the spring.

I am so sorry for your loss as well as my not being able to be at the visitation in person. James was a special teacher of mine and one who I’ve never forgotten. I was in girls choir and acapella choir as well as taking private voice lessons from him. He always had more faith in my abilities than I did. I especially remember a song that it seems like we worked on for ages about a blue gown–never did like it though. I’m a teacher now and often wonder how he motivated us to do so much more than what we thought we could–we even sang in Latin back in the day. None of us kids understood what we were singing, but I remember it would be beautiful. His face would beam a smile at us when we did a good job.

You are in my thoughts and prayers as you go through this difficult time. But I imagine Mr Ralston, never James to me, is directing a huge choir in heaven that my mother and father are in and one that I hope to join one day.

May the thoughts, prayers and memories of friends and students bring you comfort and strength for the days ahead. So sorry for your loss. We will miss Jim.
Nancy

I was sorry to read of Jim’s passing. He will be sorely missed by the whole community. I send my deepest condolences to you and your family.

I was deeply saddened to hear of Doc’s passing. I had two unbelievably fun summers with him at Music Camp followed by 4 inspiring years in KU choirs. I have many memorable musical experiences to thank him for from my first Dello Joio at camp to Quantrill’s Raid and the Carmina Burana.

One of my favorite memories is the joy on his face after he’d checked the house one last time, hopped up on a table in that concrete hallway in Hoch and lifted his arms to start “Fanfare for Christmas Day.” I get chills just thinking about the sound of that many voices in that small space.

My thoughts are with you and your family.

Susan,
I am sorry to hear of Jim’s passing. Trinity was always filled with glorious music during my time at Trinity and is one of my fond memories. You and the girls are in my thoughts and prayers during this time of loss. John and Hannah send their condolences as well. They now both live in Austin, TX and still passionate about music. I am visiting with them this week.
With deepest sympathy
Peggy, John and Hannah

Ralston was one of those inspiring teachers everyone remembers – and what memories – Christmas Vespers, Beethoven’s 9th, Carmina Burana, and the Symposium of Contemporary American Music in Hoch Auditorium – Phi Mu Alpha – choral conducting class – choral symposium – and the countless stories when guests like Paul Salamunovich and Clayton Kreihbel dropped in! During one of those animated discussion about the “dumbing down” of high school and church choir repertoire, Ralston had the last word – teach the classics – have enough faith that good music will inspire your choirs. I’ve never forgotten what Dr. Ralston said – and it’s been my teaching philosophy for 40 years!

I am sad to hear of Dr. Ralston’s passing. My heart goes to his family and all who loved him. I was a member of University Singers for two semesters in 1993/94 and remember him and my time in that choir vividly; I so loved being a part of that ensemble and enjoyed Dr. Ralston immensely. He was a gem.

I am so sorry to learn your very sad news. Jim’s dynamic passion for music and enthusiasm for life made him such a wonderful part of our community for so long! His loss leaves empty places in many hearts. May you be comforted by your memories of all the best times he had with you and may you be blessed through all your sorrows.
Alicia Clair

Dr Ralston was my high school choir teacher (1960-1062), music theory teacher, and church choir director at Welborn Community UCC. What amazing groups he produced for the talent he had to work with. Even our small church choir performed the “Elijah” and did it well. When I was teaching music in the public schools and later a church choir director, I always referred back to what I learned from Dr Ralston. I’m so sorry for your loss.

Singing in the choirs at KU under “Docs” direction from 1978 to 1983 was absolutely one of the highlights of my college years. He was demanding without being boorish and he always seemed to get the best out of us. I expecially enojoyed Vespers and the large choral works that we did each semester. My freshman year I believe we did the Mozart Requiem with the KC Symphony in Kansas City and my senior year, I believe, Robert Shaw came to KU and directed Beethovens 9th with the KU choirs and Orchestra. Thanks Doc for the great experiences and the wonderful memories of you! Much love to you Susan and the girls.
Doug Harwood

Mr. Ralston was my choral music teacher at Washington High School from 1956-60. He helped us form a sextet that sang together all four years, and he directed all the musicals wherein I got to be part of the chorus. I do not have now, nor did I then, have any kind of “good” voice, but he made a real impact on my life nonetheless! In fact, years ago, I wrote a letter to him when I read in the diocesan paper that he was choir director at Trinity; of course, I do not know that he ever received it. I myself have now taught school for some 45 years, so I know what teaching meant to him. I’d just like it to be known that he touched my life.

I am saddened to hear of your loss. My thoughts are with you and your family.

Steve and I send our condolences to you and your family. We are so sorry to hear of Jim’s passing. We know this is a very difficult time for you, but hope you will remember all the happy times with Jim.

You and your family are in my thoughts and prayers in this very difficult time. May you take comfort in knowing an angel is watching over you and may your memories be blessed.

Please accept my sympathy on Jim’s passing. All of you have brought joy and solace to others through music; may it comfort you now.

Mrs. Ralston, I’m so sorry to hear of Dr. Ralston’s passing. I was in his last choir at KU before his retirement in the 90s. My favorite memory of him is the day I encountered him downtown, ringing a Salvation Army bell and singing Christmas carol duets with Stan Shumway at the top of their lungs, giggling like schoolboys all the while. I think of this every December and the memory of it always brings me joy.

Susan and family,
We are so sorry to hear of Jim’s passing. Please know you and your family are in our prayers.

I just visited Jim Tuesday. We go so far back
= the 50’s church choir,U.S.Navy and a deep friendship.
We are so very sorry = He will bring great music to heaven!
Our deepest condolences to you and your
family.

Doc was my favorite professor at Kansas. Demanding, funny, caring, interested in his students and loved what he did and had the unique trait of being able to bring out the passion from his singers.
Thank you for growing my passion of music (and for not kicking us out of Hoch for drinking during major works rehearsal!)
Today I am listening John Rutter’s Requiem in your honor and remembering you.
Safe travels sir. You will be greatly missed and my deepest condolences to Susan and your daughters.

Susan, I was very sorry to hear of the death of your husband. You have my condolences.
Best,
Vicki Meadows