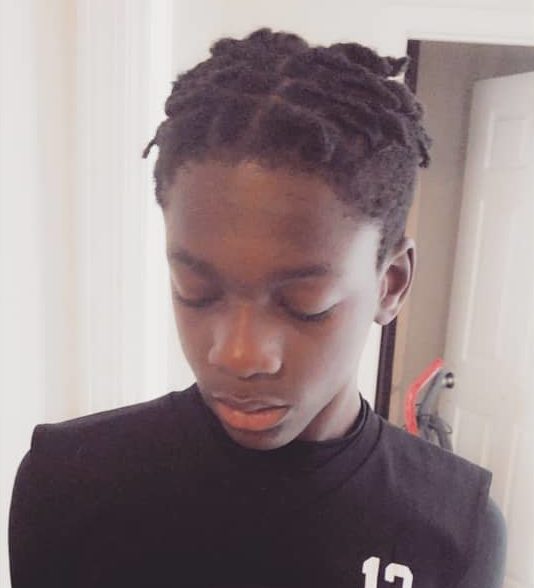 Funeral services for Jayion Christian Harris-Jordan, 13, Lawrence, will be 10 am Thurs. July 25, 2019, at Christ Community Church, 1100 Kasold Drive, Lawrence, KS 66049. A visitation will be Wednesday from 6-8 pm at Rumsey-Yost Funeral Home.

Jayion Christian Harris-Jordan was born to Jalisa Jordan on February 1, 2006 shortly after he was embraced by father Tyrone Pointer and the entire Pointer Family. Jayion attended public schools in Kansas City Kansas and Overland Park, Kansas, before relocating to the Lawrence, Kansas School District. Jayion, along with mom and siblings moved to Lawrence in 2015. He completed the 7th grade at Liberty Memorial Central Middle School; and was promoted to the 8th grade.

Jayion was a talented reader with an impeccable memory: he aspired to be a writer, rapper, comedian, and professional ball player. He accelerated in sports as he played football and basketball. He also participated in plays and musicals at Lawrence Central Middle School, as well as other extracurricular activities.

He was active in the youth group at church and always enjoyed spending time with his Pastor and church family. Jayion accepted Christ at a young age and practiced his faith by extending an opportunity to invite neighbors and friends to his church. His faith was important to him, and he desired to learn more about God.

Jayion stayed active in the community as he was a member of the Boys and Girls Club in Lawrence. He enjoyed many activities there, such as swimming, basketball, and other life skills programs.

He was such a loving and kind intelligent young man who never met a stranger. He made it his business to get to know the world. He included everyone he could in his circle of love. Jayion was very playful and enjoyed expressing his sense of humor on a regular basis. He loved being the big brother to his five siblings and enjoyed his status quo of being the leader. He cherished a special relationship with his dad; and Jayion shared an unbreakable bond with his mom. Jayion embedded a lasting impression on his aunts, uncles, cousins, and his Nonnie, Memaw, Papa and so many other loved ones.

His legacy will linger in in the hearts if my extended family. God shared such a treasure to the family and I am sure his mother, siblings and all the other family members will hold his memories close to their hearts. Rest in in Live Jayion. You were a special person planted in the lives of people you were able to freely love as they showed you live too. You will always be lived and miss til the end ❤️

Heaven has a new angel. Renita, Jalisa and the entire family my thoughts and prayers have been with you all since this happened. Jayion was loved by God most so He called him home. Take comfort in knowing God knew what was best and holds him in his arms. I will continue to pray
for your strength to endure this time of mourning.

Continued prayers for you Renita and Jalisa; our hearts are breaking with yours; may God continue to keep His loving arms wrapped around you all; in our continued prayers…

My deepest condolences to you in such a difficult time. May God usher you and your family with peace and comfort.

Your wings were ready, but our hearts were not. Rest in peace our new angel.

Danita my sincere condolence to you and Jalisa and family. Know that I am in prayer with the family. It’s hard when we lose a loved one but the comfort we have in JESUS will carry us through. Hold on to God’s unchanging hand and be assured that through Christ we will be United. Your grandson is safe in the arms of the most high. Again my deepest condolence. Prayfully Wanda

Jayion was a great kid. I had the privilege of driving him to school his last year at Deerfield before he moved. My thoughts are with his entire family.

Jayion was the student most special to me during my forty years of teaching. He so enriched my life. I wish peace and comfort to Jalisa and her sons.