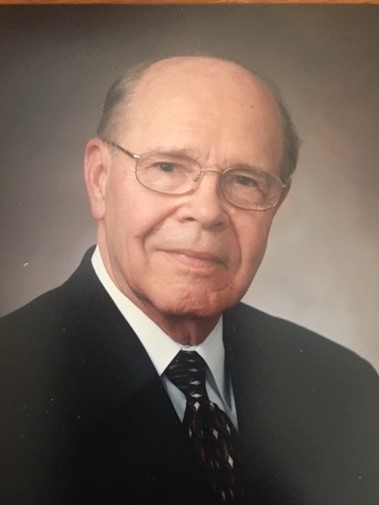 Memorial services for Robert “Bob” Elden Bowline, 92, Lawrence, will be at 10:00 AM Tuesday, August 27 at First Baptist Church, Lawrence. Bob went to be with his Lord Jesus Christ on August 22, 2019 after a brief hospitalization. His family rejoices in his beautiful life spent serving others and they are happy he is now in heaven.

Bob was born in Marquette, KS in 1927 and was raised in Hope, KS. Throughout his childhood, Bob cultivated a passion and talent for anything musical. At the age of seven, Bob took his first job working for his father at The Hope Dispatch newspaper, a career that continued throughout his junior-high and high-school years. During his newspaper years Bob developed into an accomplished and skilled linotype operator.

At the twilight of World War II, Bob joined the US Army and served in Washington DC at the Pentagon and at Fort Riley in Communications.

In 1946, Bob began his attendance at Ottawa University, where his lifelong love of music was put on full display; he played the trombone and baritone, sang in the Ottawa University choir, and toured in the summer with The Ottawa University quartet. Even more significantly, it was in Ottawa that Bob met his wife Wilma Haack. The two married in 1953.

After college, Bob initially worked for Ottawa University as a recruiter. He then joined Hallmark Cards, where he worked for 32 years in Kansas City, Leavenworth, and then the Lawrence plant as Personnel Manager. Bob developed an immediate and intimate fondness for Lawrence, as evidenced by his support of the city through his civic involvement and leadership in local groups such as: First Baptist Church, serving in many leadership roles and singing in the choir; Lawrence Chamber of Commerce; Kiwanis Club; Friends of the Theater (FROTH), Salvation Army; Haskell Institute; Douglas County Historical Society; Lawrence Arts Center; Lawrence Community Theater; Theater Lawrence; Friends of the Lied; United Way of Lawrence; Christian Psychological Services; Warm Hearts; Douglas County Red Cross; Lawrence Arts Commission; Friends of the Spencer Museum of Art; Van Go, Inc; and Lawrence Chamber Players.

After his wife Wilma passed away in 2010, Bob reconnected with his college friend Dorothy “Dottie” Dalbom. Happily, the two married in 2012, Dottie moved to Lawrence, and she quickly shared his enthusiasm for the Lawrence community.

In his spare time he enjoyed sailing on Clinton Lake; reading autobiographies; singing for many years in the First Baptist Church Choir; taking trips fueled by adventure with his family; and being a patient and loving father, grandfather, and great grandfather.

In lieu of flowers, the family suggests memorial contributions be made to the Salvation Army, in care of Rumsey-Yost Funeral Home, 601 Indiana Street, Lawrence, KS 66044.

My late husband, Clay Kappelman had very much appreciated Bob’s kindness and I know he is greeting him along with others in heaven. Prayers for your family healing.

Bob and I served together on the Theatre Lawrence Board of Directors. He was enthusiastic and very helpful with the various “duites” of the board. I am saddened to read of his passing but will remember him as always delighted to see a friend and I was so happy that he enjoyed a great second marriage with Dottie after Wilma’s passing.

To this day I have called him Mr Bowline. Such a nice, caring man, with a big smile. He will be missed by many Hallmark friends, and others. RIP Mr Bowline.

Bob Bowline was the best HR manager we ever had at Hallmark Cards. His legacy will be long remembered.
Prayers and condolences to his family and friends.
Rest In Peace Mr. Bowline.

From Dean and Judy Bevan...

Bob Bowline was a wonderful man, and Judy and I are better for knowing him. We’re grateful for his friendship, and for his service to Theatre Lawrence as well as the many other organizations he supported. We’re sorry we are out of town and unable to attend his services.

From Jennifer and Marty Welch, niece and nephew...

It is with a sad heart that we send condolences. Uncle Bob was a constant throughout our lives, providing love, support and words of encouragement. Even though we grew up in Illinois and after our marriage, moved throughout the United States, Uncle Bob came where we were and was a wonderful role model. We will miss him greatly, but will always remember his zest for life and family and how he celebrated all of us. We rejoice that when he entered heaven, we are sure he heard the words “Well done, good and faithful servant!”. To our cousins and Aunt Dottie, may God be with you in these difficult days. Jen will be with you on Tuesday.

From his niece, Cate Fields, and Linda Masse...

We are so sorry for your loss. He was a kind, caring, giving man, husband and father/grandfather who lived a very full, long, faithful and inspiring life. He used his life to serve God in every way he could. For his in-laws, even through far geographic distance, he was always there in both good and bad times, providing much appreciated love and support. We loved him very much and will miss him, but he will live on in our hearts. Love never dies.

We are so saddened to hear of Bob’s passing. He always held a warm place in our hearts. Sorry I am out of town and not able to come to his memorial service. Bob will be missed.