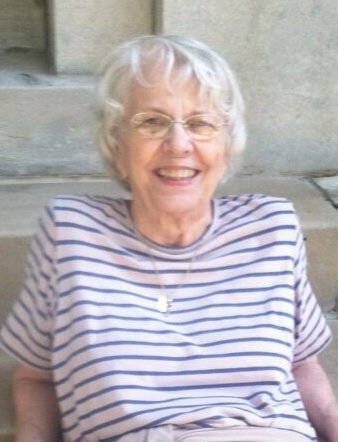 Julie A (Bolton) Nieder, 80 passed away on January 28th, 2020 at Lawrence Memorial Hospital.

She was a lifelong resident of Lawrence and graduated from Lawrence High School in 1957.

After raising her children she worked at Raney’s Drug Store, US Bank, and the Shelter.

Julie was an avid KU Basketball fan, loving and devoted mother, and especially loved her role as Grandma (G-Ma/Kansas Grandma) and Great Grandma. She will be deeply missed by all.

Visitation will be held on Friday February 7th from 6:00pm-7:30pm at Rumsey Yost Funeral Home.

In honor of her love for KU basketball a Celebration of Life will be held at the Eldridge Hotel in the Big Six room during the KU game on Saturday February 8th from 11:00am-2:00pm.

Donations can be made in honor of Julie Nieder online to The Christopher and Dana Reeve Foundation at http://give.reeve.org/fundraiser/2544831

So sorry to hear of your loss. My deepest condolences and prayers for comfort for the family.

Thoughts and Prayers to the Nieder Family for your loss

From Dick and DeElla Soukup...

Our deepest sympathy to all of the family. Feel very blessed to have met Julie and Raymond through Mike and Sheri. Our thoughts and prayers are with you.

Mike and Sheri and family,
We are sorry for your loss and are thinking of you at this sad time.

From Leroy and Doris Bateson...

Mike and Sherri and family. So sorry for your loss. Our thoughts and prayers are with you.

I grew up with Julie in North Lawrence and Woodlawn Elementary School. I had to pass her house every day to go to school and will never forget the rock wall around the house. I still have fond memories of the “old” days. So sorry for your loss.

Julie and I went to Lawrence High School together and many classes together. She was always a very happy person and fun to be around. We had a lot of fun together. Our thoughts and prayers are with each member of her and Raymond’s family.

So sorry for your loss. I knew Julie for a lot of years she was a fun person and is missed

Julie & Raymond were such great neighbors for 45 years. So sad to read about Julie’s passing. It brings back many good times we had together.