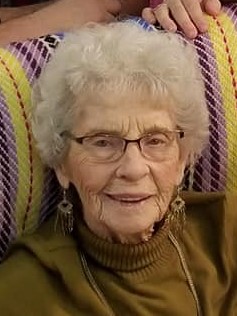 A visitation for Fern E. Johnson Henderson, 92, Lawrence, will be held Saturday, July 18th from 1:00 – 2:30 pm at Rumsey-Yost Funeral Home. Private entombment will be at a later date at Memorial Park Cemetery Mausoleum.

She was a longtime secretary at M & M Office Supply and served as organist and pianist at Clinton Parkway Assembly of God. She recently attended Cornerstone Southern Baptist Church.

Fern was preceded in death by a son, Terry E. Johnson, her first husband, Eugene P. Johnson, and her second husband, Richard Henderson.

I took care of Fern several years ago at LMH. I always remember that she had been the organist for her church for years and years, She was a classy lady who brought cheer into the room every time she came to the hospital. My condolences to her family,
Rita Lindsey McGrew

I knew Fern when I worked at McDonald’s her and Richard would come in everyday. She was a classy lady hair was nice always dressed sharp. So sorry to hear that she is gone but I am sure she is happy in heav

Fern was an angel to my Mother. We loved getting to know her and enjoyed her positive and spunky personality. We will miss her.

We’re so sorry to hear of Fern’s passing. She was always so nice to me, and a good friend to Mom. I always enjoyed her sense of humor and we’ll miss her. Our condolences.

Bob and Family,
Fern and Richard were our neighbors for many years. We always enjoyed talking with them and relished Fern’s homemade jams. She had her hands full taking care of Richard during his ill health and deserves her rest. We miss them.

Bob so sorry to hear about Ms. Fern. Always enjoyed her sassy personality. She will be missed.