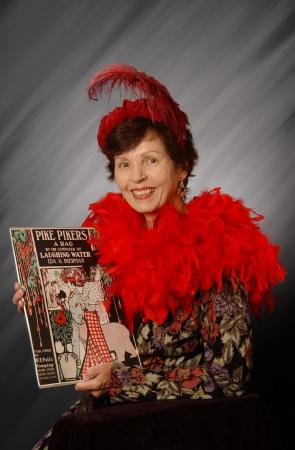 Nora Louise Hulse, 88, of Lawrence, Kansas passed peacefully at Lawrence Presbyterian Manor on July 24, 2020. Her daughters were by her side.

Nora was born on February 27, 1932, in Clay Center, Kansas to Andrew and Nora Carlson. Her older half-brother, Leroy, predeceased her.

Nora’s first love was music. She began playing piano by ear at the age of 3. At age 4, her mother–a graduate of Chicago’s American Conservatory of Music in the 1900s–began formally teaching her piano, then taught her pipe organ and violin. She soon became an in-demand piano/organ accompanist and piano instructor. After listening to Hit Parade on Saturday night radio in high school, she began playing Boogie Woogie for her friends in high school–against her mother’s wishes.

A lifetime of juggling jazz and classical music followed. During early adulthood, Nora played ragtime music in Cripple Creek, Colorado, then studied at the Interlochen National Music Camp in Michigan, the Kansas City Conservatory of Music, and K-State University. She later earned a Bachelor of Science in music education in 1973, a master’s in music performance in 1976, a master’s in pipe organ performance in 1979, and a Doctorate in Music Curriculum and Education in 1988.

By the end of her career, Nora was a retired music professor, performer, writer, researcher, and expert in female ragtime composers. She produced five CD’s and companion music folios of womens rag, performed at ragtime festivals across the country, did ragtime lecture recitals, co-authored an annotated ragtime lexicon, and earned countless awards and certificates, including the prestigious Scott Joplin Award for her extraordinary contribution to ragtime music at the Scott Joplin International Ragtime Festival in Sedalia, Missouri.

After moving to Columbia, Missouri in 1966, Nora met her husband Mark while playing music at Shakey’s Pizza Parlor. They quickly fell in love, and married the following year. While in Columbia, they performed for 15 years on “Pepper and Friends,” a live talk show broadcast on KOMU-TV. For years, their duo, Ragtime Razzmataaz, performed at ragtime societies and jazz banjo festivals all over the country.

Nora and Mark moved to Lawrence, Kansas in 2006 to be closer to family. In the following years, they spent every Thursday evening playing in the Junkyard Jazz band at the American Legion with many close friends and their daughter, Sue Nanninga, who contributed vocals and played ukulele. They continued to live full, busy lives together until Mark passed in 2017.

I was so sad to hear about Nora’s passing. My biggest pleasure in the past few years has been visiting her at the nursing home on Monday nights. She always made me feel so welcomed. I’ll miss her very much and will always be thankful that I was able to spend time with her. My condolences to Sue, Jane, Matt, Brian, and Michael.

I met Nora at Presbyterian Manor. She had an extra spark, a lively spark. I will miss seeing her. God be with each of her family members and friends, and bless you with happy memories.

Dear Jane and Sue, I was so sadden to hear of your mother’s passing. She was such a inspiration to me teaching me to play the organ. I remember my mom going to Shaw Music and buying me my Baldwin Organ and meeting your mom in 1968. I went there for a while to take lessons and later to your home. Our mother’s became friends and we use to go to Shakey’s Pizza to listen to her and Mark. We loved it. What wonderful memories. I even remember when Matthew was born. I would run into her some throughout the years until we moved out of state. And reconnected later on FB with her. You girls stay strong, you have one another and never let go of that. My heart goes out to you and will be praying.

I’m sorry to hear of your mom’s passing. I know how much you love her and will miss her. Praying for peace and comfort for you and the family in this hard time.

Sue, so sorry for your loss. I saw the obit on Kewpie.net and just wanted to let you know we are all thinking of you.

Nora was a special lady with music talents few people attained. The last times I visited Nora before the Manor lock down, she was sound asleep. She will be missed by her family and friends!!!

We have lost a great lady and great musical talent. Nora could play any style of music and liked the challenge of new songs. I played bass along side of her for many years in the Junkyard Jazz Band and saw first hand her musical abilities. But more than any of that is, she was a very nice lady with a great heart. She will be missed. To Sue and the rest of the family we are thinking of you.