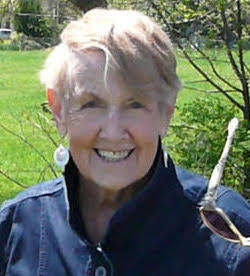 Anne Theresa McDonald Kraus was born in NYC, the youngest of five children, on 4-8-1926 to Marie (Ross) and Patrick McDonald. She never knew her father, who died when she was an infant, and her mother raised the five children through a depression, working mostly as a church organist.

Growing up, her family moved many, many times, so she was always adjusting to a new school, trying to make new friends. This contributed to her desire to provide her own children stability: one home, the same schools, from early childhood through HS graduation.

Anne was shy, quite smart, and hungry to learn. She “skipped” grade levels a few times, which meant that she was always younger than peers, and graduated HS at age 15. She lied about her age to get her first jobs, as a waitress in a restaurant on Canal St (good tippers) and at a bank on Wall St. She also taught ballroom dancing at an Arthur Murray Studio and volunteered at the USO during World War II. As was a norm for good Catholic girls, she lived at home until she married. However, a great disappointment was wanting to support the war effort by working in a factory (a “Rosie the Riveter”) but that dream was quashed by a priest-uncle who thought no good could come from such a thing as the girls lived in dormitories and not in their homes.

Anne met Paul Kraus through friends at a wedding, before he shipped out for three years in the Navy on a destroyer in the Pacific, a time span documented in letters. After the war, they married on July 3rd, 1948, and moved across the George Washington Bridge to New Jersey.

Anne delighted in having her first apartment, a new job at a school, and later, after daughter Susan was born in 1950, in watching their home being constructed in Closter, NJ. They lived on Pearle Road for 34 years, on a street where neighbors became like extended family, raising daughters Susan, Marjorie and Kate. She was a devoted mom, volunteering in schools and church, and a giving friend. Once her girls were in school, she had a variety of jobs, always looking for something different and challenging, from office work to a high school cook to editing for a publishing house. She started college in her ‘50s, a dream long deferred, and took far more courses than required for her degree. Anne was an artist (oil painting, fabric, quilting and pottery), loved both music and science, was intensely curious, and an intrepid traveler.

Anne loved exploring, going to Europe multiple times, every island in the Caribbean, Mexico, Fiji and Japan. She rented a casita in San Miguel de Allende to study Spanish. She traveled around Japan alone, when there were no signs in English. She went on cruises, lots of cruises. She relished meeting strangers, especially young people, and learning about their lives. While her daughter didn’t know at the time, she also started hitchhiking in her ‘80’s, explaining when ‘caught’ that people in Lawrence were very kind and she only got in cars with women or couples (hard to argue with that logic.)

Anne reveled in her years living on Emerald Isle, NC, making more good friends, riding her bike, taking water aerobics classes at the clubhouse, and being by the beach. Every day she walked on the hard-packed sand along the ocean with Charlie, her beloved, snappy chihuahua.

Music was in Anne’s bones. She knew the lyrics of every song from the ‘40s and ‘50s and every musical. She could sing Gregorian Chant on cue. In her late 80’s she joined a performing arts group in a play about trans-gendered teens, singing and dancing on the Lied Center Stage. She never missed Vespers or anything at Bales Organ Recital Hall.

Anne was raised Catholic, sent her three daughters to St. Mary’s Elementary school and tirelessly served both parish and school. But, in later years, she worked to balance her faith with evolving personal and political beliefs. She walked door-to-door for Hilary Clinton in 2008… then had an 8-year crush on Barack Obama. She felt honored when she met Michelle Obama (as Mom told it, they shook hands, Anne said, “I’m praying for you,” and Michelle looked straight into her eyes as she said, “Thank you.” It was a “moment.”) When Donald Trump was elected president, Anne grieved. First that she would never live to see a woman president, but more because, “Donald Trump is a con man, all about himself. He’s bad news for my country.” That was 2016. Over the last four years, no matter how much dementia might confuse her, she never wavered about Donald.

When Anne was asked about favorite memories, they were often about her grandchildren: Sarah, Ben, Ross, Tess, Zoe and Amy. Their pictures were in her apartment. She might tell the same stories over and over (like flying in Ross’s two-seater plane, the pooch plunge with Sarah, beach days and Europe travel with Tess and Zoe, Amy’s wedding, Ben playing piano for her) but they were all good stories, of happy times.

She relished good food and drink, and never turned down a movie. For New Year’s Eve 2019, she went to see “Little Women” and then shared a feast at India Palace. One of the last times she was ‘out’ before the COVID lockdown, she perched at the bar at the Fish House downing her all-time favorite: oysters on the half shell and ice-cold beer.

Anne is the last of her generation, and all of her siblings and cousins preceded her in death, She is survived by daughters Marjorie (Media, PA), Kate and son-in-law Mark Brilakis (Hillsborough, NC), Susan and son-in-law Frank Barthell (Lawrence); grandchildren Amy Spahn (and great-grandson Declan), Tess, Ross and Zoe Brilakis, and Sarah and Ben Barthell; nieces (Jane and Karen especially) nephews (Bobby), cousins that she lost touch with but never stopped missing.

When she died, Anne was in a hospital bed in her daughter’s family room. She’d been in a coma for just two days, after 10 days in hospice care. Fr. Mike (who’d baptized her grandchildren over thirty years ago) came to her bedside for ‘Annointing of the Sick.’ Anne was happy that her three daughters were with her, felt nurtured and loved, and even cracked some jokes. We stroked her head, held her hand, and told her she was going on a wonderful journey. When we see her now, she is in the ocean, laughing, waving at us who are still on the beach, then leaping up to meet a wave.

Susan, I loved reading about your beautiful mother. I feel like I knew her and I know you are so much like her!
And you look like her!
What a wonderful long life she had filled with joy and adventure and love.
I love what you wrote about the ocean , the beach, and jumping up to meet the waves!
My love and prayers are with you.

Susan: My sympathy to you and yours. Whatta life. Whatta gal! Beautiful tribute.

We are thinking of you all and celebrate her life story with you. Her beautiful legacy is evident in both Susan and Sarah. Our deepest sympathies and wishes for comfort for all of you.

What a wonderful life and story. It made me feel like I knew her. And what a poignant way to end life. That we should all be so lucky.

Susan and family: Rich and I are so sorry to hear about your mother’s passing. It sounds like she led a wonderful, full and happy life. Caring thoughts are being sent your way.
Aynsley & Rich Sosinski

I had the pleasure of befriending Anne at Meadowlark. She stole a piece of my heart and I feel so blessed to have spent some time with her. She spoke very highly of all of her daughters and loved to share stories about them. What a wonderful woman and legacy.