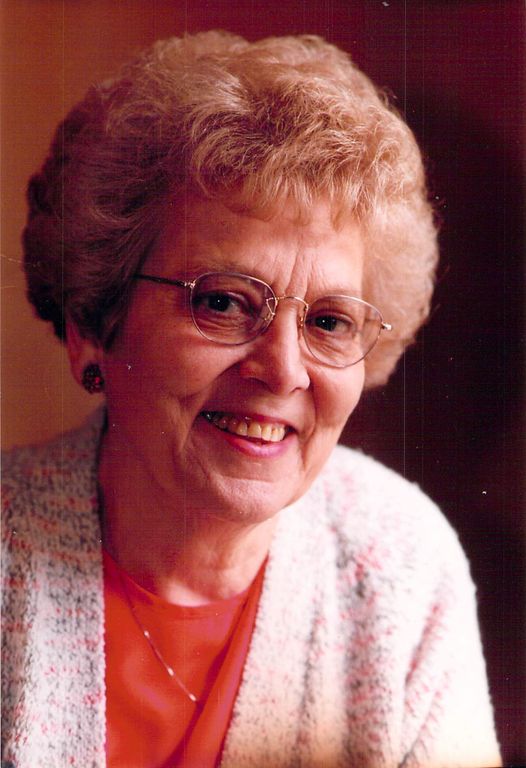 She was born September 14, 1928, in Topeka, the daughter of William Harley and Vera Maude McNemar Rathburn. She graduated from Topeka High School in 1946.

Mrs. Garrett worked as a operator and manager at Southwestern Bell. She enjoyed traveling, golf, reading, genealogy and her family.

I will miss Patty at Brookside…She was always cheerful and always had kind words of everyone……She will be missed…….Joyce Dillon

So sorry to hear of Patti’s passing, my condolences , I’ll miss her!.

So sorry to hear about Patti.
Prayers and condolences to the family.

From Pam Groves and family...

Thinking of all of you with love and a heavy heart. I will always remember my aunt’s smiling eyes and laughter – you couldn’t help but smile back and laugh too!

My prayers to the family and friends of beautiful Patti! She was so cheerful and kind! I loved her so much! I never got to see her again as we planned because of Covid!

So sorry to hear about your mom. Our prayers and thoughts are with you, Bob and your family. She was loved and will be missed by many.

Really are no words. Remember all the good times and Smile. Memories are the Best and the minds heart will allow warm smiles.

To the Glenn Family,

Kathy and family – My sincere sorrow for you and all the family. Patti is now at peace and without pain. Unlike others, Pattie lived a long and full life. She was so lucky to
have a loving and caring family.

Kathy: We are sorry for your loss. It was wonderful that your mom was surrounded by her family at the end. She will be in our prayers for the repose of her soul.

From Wayne and Bobbi...

So very sorry to hear about your mom. Thoughts, love and prayers go out to you and the family!

Kathy
My prayers and sympathy for you and your family. 🙏🏻

From Betty and Gene Stone...

Kathy and family. So sorry for your loss just remember all the good times ya had with her and the last hour you spent visiting her. I’m sure she was as amazing as she was beautiful.

Kathy. So sorry to hear about your mom. You & yours are in our thoughts & prayers.

Kathy I’m so sorry for your loss. Prayers and thoughts sent to you and your family.

Kathy, I am so sorry to hear of your Mom’s passing. Keeping you in my thoughts.

I am so very sorry to hear this lady has passed. My husband and I met her in Texas while she was visiting Kathy and Bob. She was a devoted wife and mother. This family is in my prayers. Such a special lady will be missed.

Michelle, sorry for the loss of your step mom. My thoughts are with you.

I loved Patti! She was always happy and had a pretty smile! Though I seldom saw her I will miss her so!

So very sorry to hear about Patti she was a special lady! She will be missed by all who knew her, hugs and prayers to the family.