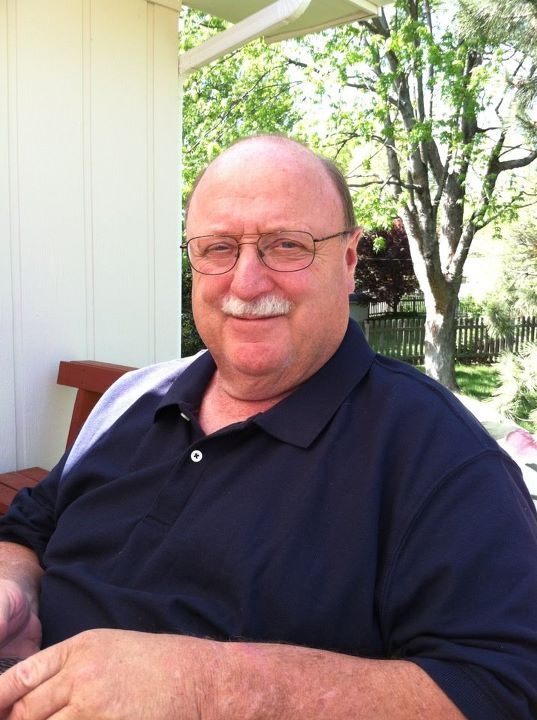 Graveside services for Gary Lee Aldridge, 70, Lawrence, will be held privately at 10am Friday, November 27th, 2020, at Union Cemetery in Baldwin City, KS. The service will be streamed live on the Facebook page of Rumsey-Yost Funeral Home.

He was born November 9th, 1950, in Kirksville, Missouri, the son of Albert and Virginia Aldridge. At a young age, he moved to Kansas and grew up near The Globe Store, where he attended Wakarusa Elementary School. He graduated from Lawrence High School in 1969 and shortly after served in the U.S. Army during the Vietnam War.

Gary worked at Bud Jennings Carpet, Jayhawk Plumbing, and most recently was a bus driver with First Student. His passions were fishing and sports, especially cheering on the Jayhawks and Chiefs. But most importantly to him was spending time with family and friends.

He married Cynthia Ann Reschke on August 15th, 1986, in Lawrence. They had just celebrated their 34th Wedding Anniversary.

He was known for his wit, smile, and caring personality. Gary was friends with anyone he’d ever met. He will be deeply missed by his friends, family, and all who knew him.

He was preceded in death by his mother and father.

I am going to miss Gary’s big grin and sharing old stories with him. Rest in peace

From Elizabeth B Albright...

Dear Cindy, Ty and Toby.
I was so glad to meet and see this wonderful person at Ty and Charles wedding and how Gary danced the dance of Love with his beautiful daughter…..now my new grand daughter in law……and how much he ment to so many…..My heart of hearts go to all of you and your families …..and know he is at Peace and continues on his journey of deep Love …..We will miss him and his jolly times that he shared with all of us…….May the Blessings Be…

Cindy and family,
So sorry to read about the passing of Gary. Please know our thoughts and prayers are with during this time.

Gary was one of the nicest guys around. He was funny and kind. I was blessed to be his monitor a few times. It was always fun. He will be missed.

Oh, the fun we had at Wakarusa Valley grade school with, around and because of Gary. We are all fortunate to have known him.

Cindy, Toby and Ty – My thoughts are with you all and I know that Gary will be missed so much in the community. I have many fond memories of us growing up that I will always cherish.

From Valerie and Dennison Cox...

I will sure miss my uncle Gary being at our family get togethers. He was the first person to greet me whenever I would walk in the room and he would always be sure to ask how I had been doing. I will think of him every time I see a tooth pick now 😉 We are so sorry for this sudden loss but please know that he was very loved!!

Prayers of strength for the Aldridge family at this difficult time! Anyone who had the pleasure to meet Gary were very blessed! He always made everyone feel accepted and comfortable! He was truly one of a kind! We will all miss him more than words can say!

Gary was a classmate at Wakarusa Valley. His kindness and humor will be missed by many.

From Doran and Cheryl Chaput...

We were so sorry to learn of Gary’s sudden passing. You are all in our thoughts and prayers.

Hi I have good memories of Gary from the bus barn. There were two Gary’s at the barn and one was named good Gary and bad Gary. Yours was good Gary. He always got to laugh everytime someone called him good Gary. He will be missed for his laughter and wit and being good Gary. I am sorry he is gone so soon.
I sorry

Gary was one of the most interesting and funny person I know. He had a wit about him that was unmatched. I will miss him and very sorry for your loss. He was always generous in his time and his caring. Bless his soul.

From Ron and Elaine Schmidt...

Cindy and family, we are saddened to read of the death of your husband. He sounds like a most kind and loving person.

I went to Wakarusa Valley with Gary and spent many hours after school with him and our friends. Although we didn’t see each other often but when I did, the aura of joy, humor and kindness was still on his face and had obviously continued throughout his life. Gary will be greatly missed by all that knew him. My sincere condolences to the family.

So deeply sorry for your loss, hugs and prayers to all of you. Gary was a priceless friend to so many.

From Larry and Ruthie Hatfield...

Cindy and family – our prayers and thoughts are with you. Gary was indeed a special friend. He will be missed. I never saw him without a smile!

From Robin and Darrell Kavanaugh...

Sending love to all of Gary’s family and hope that you find peace by remembering all his love and all your wonderful memories. Hold each other close and let his love surround you.

“Wayne!”…that is how Gary would always greet me. always happy, always had a joke at hand, always early. He had a heart of gold. As saddened as I am by his early passing, I know there is nothing I can say other than he will be missed by so many good people and our world is dimmer without him. Thanks for sharing him with us the past 11 years.

Cindy and family my heart and thoughts are with you. Gary could always make me laugh and help me get over being mad at things. His being there in the morning always made my day…He was a great person. He is missed greatly…

Cindy, was saddened to read about Gary’s passing. What little I was around him , he was a delightful man to visit with. Some of my past co-workers at the bus barn said he was a great man as well. Thoughts, prayers, and hugs to you.

My thoughts are with you Cindy! Lots of Love, Linda Votaw

From Fred and Tammie White...

Gary never knew darkness. When Gary walked into a room there was automatically a ray of sunshine around of Gary. He would brighten anyone’s day. Rest in peace Gary. Fred and Tammie

Cindy and family,
I was so sorry to hear about your loss of Gary. I remember him as such a kind and cheerful man. May your sweet memories of him sustain you in the days ahead.

From Tom and Annette Hughes...

Cindy and Family,
So sorry for your loss. Gary was a great friend and left us all with wonderful memories to cherish. Our thoughts are with you.
Sincerely,
Tom and Annette Hughes

From Brandon Molton and staff at Jayhawk Plumbing...

Our thoughts and prayers are with your family during this difficult time.

From Dutch and Shanda...

Thoughts and prayers go out to you all. Gary was a gentle soul and will be greatly missed by all. He was a great friend to anyone, and always had a smile. He never knew a stranger, and made everyone feel welcome.

From Mary Anne and Rob Kort...

Dear Cindy and family, Rob and I are truly sorry for your loss. Gary was one of the kindest human beings to ever walk this earth. His wit and humor shared with everyone, we were lucky to know him. We’re keeping you close in prayers. If we can do anything please let us know.

Cindy, so sorry for your loss. My thoughts and prayers are with you and your family

Cindy and kids, I will always cherish special memories of your dad being one of the most cheerful, patient, and caring people. I last saw him on a bus ride to a KU bball game we took Brett to and he was so helpful making sure Brett was comfortable and having fun! He lived life to the fullest. I am so sorry for the pain you feel. We have some special guys up there now watching over us and cheering on the ‘Hawks together now for sure. Love and hugs to you guys. Hang in there. I’ll be thinking of you.

Cindy, Ty, Toby and family, we’re so sorry for your loss. Heaven has gained a wonderful angel. Love, Linda and Steve Horn

I am so sorry for your loss. He was always such a kind man. In the last few years I got to spend a lot of time with him. He was often the bus driver for my field trips. My heart goes out to you all.

I remember the years of youth sports that Gary and I watched and coached our sons. He was a great father and a individual easy to talk with. Bless your family.

Dearest Cindy, Ty, Toby, & Families, I will always remember Gary’s wonderful smile and keen sense of humor. Patience was his virtue: as he attended our fun; but let’s say, sometimes interesting family events! What a great guy! You are all in my thoughts and prayers. cousin Ann

Dear Cindy and family. We are so sorry for your loss. May God give you the strength to cope with your loss. Our thoughts and prayers are with you.

From Hillary and Chris Johnson...

Gary was a one of a kind. Always able to bright a dull day and make someone smile. Gary touch a lot of people’s hearts with his positive outlook on life and willingness to help others. He will be missed greatly. Our Prayers and Thoughts are with you all. Rest in Paradise.

Cindy our thoughts and prayers go out to you and your family.

My thoughts and prayers are with your family.

Cindy and family, Our thoughts and prayers are with you.

Cindy and family,
Please know that you are in my thoughts and prayers. I am sincerely sorry for your loss of Gary. Mark Cairns

I’m so sorry, Cindy and Ty. Keeping you all in my prayers.

From George and Darlene Withers...

Cindy and family, our thoughts and prayers are with you. Gary was such a great guy to work always a kind word and great smile. He will be missed.

Our thoughts and prayers are with you. So sorry for your loss.

From Joe and Janice Arneson...

Cindy and family, So very sorry for your loss. Our prayers are with you.

Cindy & all of Gary’s Family, I’m so sad to hear of Gary’s untimely death. He was always so kind to me & it hurts to know that all of us are are going to have to go forward without this big guy here on earth. Another friend from the Harbour Lights crew gone before his time. Sharing your sadness, Sara Gillahan

Cindy and Family, You are in our thoughts and prayers. We are so sorry for your loss.

Cindy & Family
So sorry for your loss, your in our thoughts and prayers
Vicki Goff-Miller & Family

From Cheldon and Mary Anne Coleman...

Please know are thinking of you! Cheldon, Mary Anne and family

From Bob and Jolene Pearson...

Cindy, Toby and Ty-
Our hearts and prayers are with you at this very difficult time.