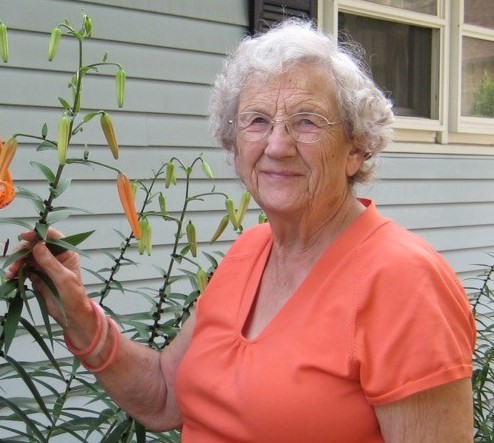 Louise was born in Hawkins, Wisconsin to Matt and Emma Fond Haugsby on January 5, 1922. Both parents immigrated from Norway. She attended the public schools in Hawkins and graduated from High School in 1939. She had always wanted to be a nurse and was accepted at Abott School of Nursing in Minneapolis, MN. She graduated in 1943 in the midst of World War II. When she took the state board exams, they asked which service she was going into, not whether is she going into the military. This was a popular war, and everyone wanted to help the Country.

She worked as a nurse at the Lutheran Hospital in Eau Claire, WI, where she was called into the Army at Camp McCoy, WI. Medical Units were assembled at Camp Ellis in Peoria, IL. From there, she was sent to Llundudano, Wales to await the invasion at Normandy. As part of a Hospital Train Unit, Louise was sent across the English Channel on August 15, 1944. They formed a Station Hospital with the 61st Medical Battalion that had served in the invasion, and the tent hospital provided a real learning experience with a potbellied stove for cold nights. Cherbourg was a rail center, and the train was ready in October for many trips to Belgium and Northern France. From mid-December to the end of July 1945, the Battle of the Bulge kept them working day and night. Railroad cars followed the troops as they fought into Northern France and Belgium, picking up casualties, treating them, and then taking the most seriously wounded to ships for transport back to the U.S. During this time, Louise was awarded four Bronze Stars for her service as a nurse in Northern France, the Ardennes, the Rhineland and Central Europe. Her hospital train was bombed by the Germans in Liege, Belgium in December 1944. It was exciting to be where history was being made. World War II changed her life. Louise made lifelong friends in her unit. She was discharged in 1946.

After her discharge, Louise worked at Camp Osoha, a girls only camp, in Boulder Junction, WI, which was a complete change from the War. Louise moved to Milwaukee, WI and continued nursing and met Edward Lieske who became her husband on July 3rd, 1948 in Hawkins. To this union, Ed and Louise bore five children: Harriette , who preceded her in death in a car accident in 1953 at the age of three, Karen Sanders (Larry), Roger Lieske (Kathy), Margo Koleski (Jim) and Jan Rogge (Edward). She was also blessed with four granddaughters, Amanda, Callie (Daniel and great granddaughters Kalani and Helle), Katherine, and Victoria (Ziyad).

A suburb of Milwaukee, Wauwatosa, was their home for forty-five years. Ed and Louise moved to Sun City West, AZ in 1992 but spent their summers at their daughter Jan’s home in Wauwatosa.

Louise was a member and former Commander of the Jane Delano Nurses Post #408, American Legion, Milwaukee, where she received the Civic Award in 1992 for the 5th District. She was a member of the Mount Carmel Lutheran Church in Milwaukee and was active in a circle and held various offices. She was an avid skier and played golf well into her 90s. She loved the outdoors and enjoyed spending time at their cabin on the Flambeau and in Iola, Wisconsin.

In Sun City West, Lousie was a member of Lord of Life Church, where she was Historian for the women’s WELCA. She also enjoyed being a member of the Writer’s Group, Woodworking Club, Rock Hounds, Lapidary Club, and was historian for the Nurses SCW Club.

Louise will be remembered for her sense of adventure, curiosity, kindness, gentleness, and her loving spirit. We will miss you.

A memorial service will be held a later date with burial to follow at Pine Lawn next to her husband, Edward.

Hugs and prayers for God’s comfort and extra measure of HIS love to you all! I loved seeing Louise with you at Trinity and seeing her enjoy her cup of coffee after services! a true Nurse virtue! what a gifted lady that shared her love for so many!

Please accept heartfelt condolences to all family and friends of Louise Lieske. Louise was a younger cousin of my mother, Alice Soder of Downers Grove, IL. They grew up in the same town Hawkins, WI, and both became nurses before marrying.

From Georgie and Mike Devlin...

Deepest sympathy to Louise’s family. I enjoyed seeing her at Trinity Lutheran Church and at Pioneer Ridge. She was a proud Veteran! Pray that God gives you Peace. Hugs.

From Bruce Suess and family...

Sorry for the loss of a great woman and veteran

Hugs and prayers for all of the family.