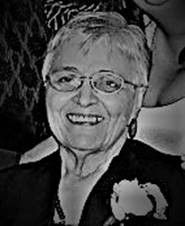 Known by many, her names were many: Honey, Mom, Grandma, Great-grandma, Sis, Betsy, Aunt Betty, Aunt Betsy, Betty O, and Betty B, just for a few. She loved family gatherings – whether it was a Swartz-Neuenswander gathering, or a Neuenswander gathering, or an Oehlert reunion, she loved “circling up” and coming together. This year of the pandemic was particularly difficult both for her and for those who loved to visit with her. As her memory declined in the past 20 years, she lost touch first with most recent memories, while holding close to those earlier memories. She spoke often of her siblings and “rocking Nancy to sleep in the bassinet which was set on the rocker”. She could recite the names of her children quickly from top to bottom, “John, Jane, Mary, Mike, Beth, Bill, Paul, Pat, Luke, Dan”. Even when names began to elude her, she held onto words to multiple verses of the old gospel hymns. When the words left, she hummed the tunes.

While her memories declined, her children’s memories of her were repeated frequently at the family gatherings. Did you know that her house on the highway was “marked” to let the “hobos” know it was a safe place where they could count on a meal? She was known for saying “what are a couple more mouths to feed, there is always enough – and there was!”. She raised her 10 children, but she fed countless others using vegetables that she canned or froze every year from her exceptionally large gardens.

She loved visitors. She loved hosting parties. She never tired of people dropping by for a visit. Nieces or nephews could always count on a “goodie or two” when they dropped in for a visit. Holidays at home were crowded with kids and grandkids spread everywhere. No reservation – no problem. Find a bare spot on the floor and spend the night. She hosted high school class reunions, family reunions, and martin parties in her back yard.

And when she could no longer be the host, her sweet spirit kept shining on. The last 10 years, her home became Brandon Woods where she loved many and was loved by many. She was known for her sweet spirit and her gracious being. Even when she did not remember who you were, you were family and she loved you.

Due to the pandemic, graveside services for Bethany L. Bidinger, 89, will be limited to family at the Clinton Cemetery, the service can be viewed live https://www.facebook.com/RumseyYostFuneralHomeandCrematory at 2:00 p.m. Saturday. Her dearly loved nephew, the Rev. Steve Bubna will be officiating and Betty’s 25 grandchildren are deeply grateful to serve as her honorary casketbearers. Betty will lie in state on Friday, from 9:00 a.m. to 8:00 p.m.

Born Bethany Louise Neuenswander on April 15, 1931 in Allen, Kansas, the daughter of Reverend Irvin and Bethany Swartz Neuenswander, Betty grew up with 7 sisters and 4 brothers. Their family moved every 3-4 years within Kansas and Texas following her father who was an itinerant pastor in the Methodist Church.

Betty fondly recalled attending early grade school in Spring Hill, Kansas and graduating from Liberty Memorial High School (Lawrence, Kansas) in 1949. Following high school, she started nursing training at Bethany Hospital in Kansas City, Kansas. A year later on September 9, 1951 she was married to Richard Carlyle Oehlert (1932-2010) in San Angelo, Texas. Together they had six sons and four daughters. They later divorced. On December 27, 1978 she was married to Franklin C. Bidinger (1926-2011) in Colony, Kansas. With that marriage she welcomed into her family two stepsons, Michael Bidinger (1955-2009) and Kit Bidinger (1959-2019).

She worked in the nursing field for over twenty years retiring in 1996 as a nurse assistant at Watkins Hospital, University of Kansas, Lawrence, KS 1996. Bethany enjoyed music (in particular gospel songs), painting ceramics, arts and crafts, birds, gardening and canning.

Throughout her life she remained actively involved in church life; as an adult she attended Lawrence Free Methodist Church and then Clinton Presbyterian Church. She was known for her hospitality and care. Her love of Gaither’s music and the old hymns kept her company daily.

Want to honor Bethany? She would encourage you to offer a meal to someone in need or invite someone into your home for meal. Memorial contributions (in lieu of flowers) are encouraged to: Colony Community Church (founded by her parents), Clinton Presbyterian Church, or the Clinton Township Museum (Purple Martin Sanctuary), sent in care of the funeral home.

Bethany’s smile was so contagious! She had the most beautiful eyes and when she smiled, her face lit up so! She so loved her family, it was amazing how she could name all her kids (10) and never miss a one. And when she spoke about them, her face would just light up! Her family was the best, such caring, silly, and loving group! We will surely miss each and every one of you here at Brandon Woods! Thoughts and prayers to you all with love….

Bill. Dan. & Families
Please accept my sincere condolences for the loss of your sister

I worked at Watkins with this sweet lady and remember most her smile, sweetness and love of her large family. Sincere condolences to the family.

From Bill and Linda Gill...

My early years were so special because of our connection with Betty and her wonderful family! My cousins in Lawrence – so many wonderful meals shared together. Thanksgivings were always special events. Spending time with all the “kids” working on the old scooter and playing long after dark, who knows what games now, but so much fun and so many memories. Betty was one of the warmest, most compassionate and caring people I have ever known. Always quick with a hug, a kind word, a warm slice of homemade bread and always ready to do for everyone else. I have been so thankful over the last number of years that Linda and I have been included in not only Oehlert Reunions, but a Neuenswander one as well. And again, as always, was treated just like a member of the family.
We are truly sorry for your loss, but know that Betty has joined those many that have passed before and is watching over all of us with loving smiles

When we met Betty for the first time, it was the warmest welcome we have ever received, like she knew us all her life. Enjoyed having our annual Steam Shop picnic at their house…Wonderful lady !! She will light the heavens up with her smile….Bob & Maggie Sieber

Betty was a wonderful woman. I will always remember playing in her yard with all of the other kids in Clinton. She would greet everyone with a big smile and always had snacks for the kids. Great memories. Our sympathy to the family.

I hold special memories of Betty. As a young girl, I attended church/Sunday school at Pleasant Grove. Your parents also attended. The services were led by seminary students from Kansas City and were held in a little building at the north end of “town” and then moved to the Pleasant Grove school until the mid “60s. I am not sure how many of you kids were born at that time, but it seemed like a bunch. She and your dad would come walking in and all you kids were all dressed up. I especially remember you girls having the cutest dresses. She often would host lunch after church at her house on 59 highway for anyone that wanted to come and would always have a Christmas party for the Sunday school kids. After she moved to Clinton, I would stop in to see her at Martin time. I loved to visit with her-always had a smile on her face. My sympathy to all of you.

Paul and I are so very sorry for your loss. With love , Cecilia and Paul Cunnick