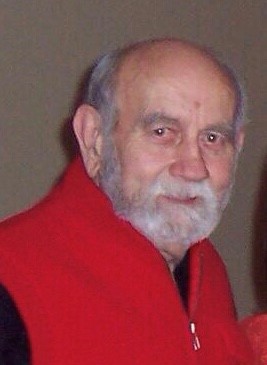 It is with deep sorrow and much love that we mourn the passing of John E. Holladay, III, of Lawrence, KS, at the age of 100 years.

John was born February 10, 1921, in Lawrence, to John and Fannie Godfrey Holladay.  He was born on Ash Street in North Lawrence and remained in Lawrence for the entirety of his life.  He had 5 siblings that have all passed; Walter Holladay, Leonard Holladay, Stella Beerbower, Edna Kessinger, and Anna Copp.

He attended Liberty Memorial High School before serving in the US Army.  He married the love of his life, Oleta Fox when he returned home.

They were members of the First United Methodist Church.  They were blessed with over 50 years of cherished memories of life together.  In 1963 they adopted two fortunate babies, Tony D. Holladay and Gay A. Quinn.

John was a dedicated and hard worker.  He worked for the Lawrence Paper Company on the riverfront and then as Lawrence Presbyterian Manor’s first Maintenance Supervisor.  He retired in 1990 and cared for his wife until she passed in 2000.

John loved dogs.  His LouLou and Angelica were very precious to him.  He walked his dogs daily and this helped him keep his health.  He loved the Kansas City Chiefs and KU Basketball.

John will forever live in the hearts of his children, Tony Holladay and Gay Quinn; and his granddaughter, Noel Dawn Holladay; and great grandchildren, Camdyn Webster and Ryder Webster.

Friends may call from 12 p.m. to 8 p.m. Wednesday, at Rumsey-Yost Funeral Home.

GA!Y and Tony: Sincere sympathy to you and your families in the loss of your dad. hE was a kind individual who loved his children and enjoyed other people. May the memories you have of the times you spent together become a treasure to you.

Gay,
Your devotion and care to your father was unmatched. My condolences to you and Tony.

My deepest sympathy to you on the passing of your Dad. He was a very sweet man and I have lots of fond memories of times with your family. Hugs, thoughts, and prayers to your entire family.

Gay and Tony, you loved, cherished and gave amazing care to your handsome, kind and adorable father, John Holladay. He will be dearly missed.

Gay and Tony,
I have fond memories of spending time at your house when we were growing up. Your Dad was a special person. You are in my thoughts and prayers.

John was one of the good guys you have the opportunity to be around; his passion to help others was a great inspiration to me as well as many others. John’s faith was the center piece of his kindness to others.

I feel blessed that John was a big part of my life ❤️ Dedicated, loyal, and loving husband, father and grandfather. You will surely be missed. Rest In Heavenly Peace.