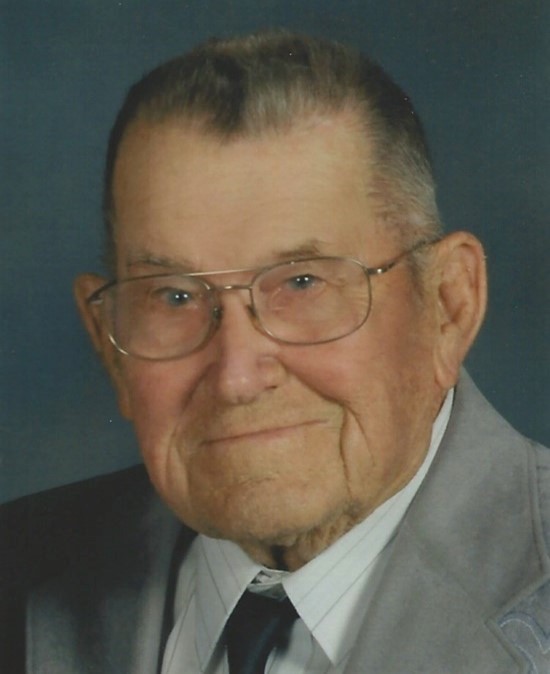 Duaine was born April 23, 1921 at Windom, Kansas. The son of Walter Victor Lindholm and Sarah Matilda (Hubenett) Lindholm. He grew up in rural Windom, Kansas. He attended Stone Corral Elementary School and graduated from Windom High School with the class of 1939. He moved with his family to rural Baldwin City in 1940.

Duaine was united in marriage to Donalda Mae (Donnie) Hobson February 24, 1947 at what is now known as Worden Cornerstone Church. They had just reached their 73rd wedding anniversary on February 24, 2020, just 3 days before Donnie’s death.

As a young man, Duaine worked for the railroad and as a mechanic for the John Deere business in Ottawa, Kansas. He also farmed and raised livestock with his father. In 1956 he began his career at Farmland Industries in Lawrence, Kansas, retiring in 1983. Duaine and Donnie were always supportive of their daughters and attended all of their school and 4-H activities.

Duaine was preceded in death by his wife, parents; sister: Elaine Hoopes; and daughter: Cheryl Spurlock. Duaine enjoyed 38 years of retirement, especially watching his grandchildren and great-grandchildren participate in various school and sporting activities when he and Donnie were able to go. He will be greatly missed by everyone who knew him.

From Darrel and Leah Rurode...

Teri, Connie and family. We were so sorry to hear of your dad’s passing. He and your mom will be best remembered by us when they both climbed our stairway to your mom’s childhood bedroom, she and your dad thoroughly enjoyed the day, and so did we. Our sharing an afternoon meal with all of you along with Bob Barkley and his daughter and son-in-law JoEllen and Forrest Waltman. So many lovely memories for them, you and us.

From Janice and Norm Estes...

Dear Terri and Connie,
Our thoughts and prayers are with you this morning as you celebrate your father’s wonderful life. We had planned to be at his service, however, we discovered last night that we had been in contact with someone who had Covid-19. We have had 3 vaccinations but we feel that we should quarantine.

Terri and Connie,
My heart aches for you. You have my deepest sympathy.
We are never ready to say goodbye. My prayers are with you this difficult day. At, least the sun is shining! It may be a sad day today,
but think of all the rejoicing as your mom and Cheryl welcomed your dad home. I really miss seeing the two of you at HyVee. You always brightened my day. God bless and comfort you!

, I remember your parents and all their support when we wee in 4-H.

From Connie and John Hey...

Terri and Connie,
Our sympathy to both of you and your families on the passing of your dad. He was blessed to be able to stay in his home because of the love and support of the two of you. God bless you all.

Sorry to hear this – prayers for those hurting from this loss.

Terrie and Connie,
I’m so sorry to hear this. Your parents were so kind and loving to everyone. I pray you find comfort in them being reunited, with their salvation and the wonderful memories and love you shared. Sending much love

I’m sorry for your loss. Your dad was a wonderful man. He’ll be missed by so many.

I want to bring a mint to place on the coffin. He was kind and generous. These are the qualities of a great man.

Terri and Connie: So sorry for your loss but know your dad is with your mom and at peace! He was fortunate to have both of you with him! My heartfelt sympathy!

Terri and Connie: I’m sorry to see of your Dad’s passing. He is back with your Mom again and he lived a good long life! Be at peace and know he stayed in his home so long because that’s what he wanted. God bless, Becky Myers OConnor.

Connie &Terri,so sorry for the loss of your dad!Your in our thoughts and prayers!

Terri and Connie. I am so sorry for the loss of your dad. May he rest peacefully .

Sad to hear of your loss and my thoughts are with you during this time.