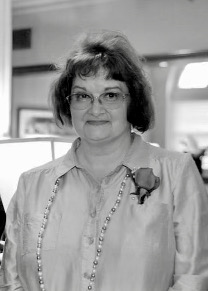 Janet Elaine Pollard, 62, died Sunday, November 14, 2021, at Overland Park Memorial Hospital in Overland Park, Kansas.  Her sons, Gideon and Gabriel VanRiette, were both by her side when she passed.  A Visitation for Ms. Pollard will be held at 1 p.m. Sunday, November 21st, at Rumsey-Yost Funeral Home, 601 Indiana Street, Lawrence, Kansas 66044.  Attendees will be required to wear masks at the funeral home and for the service.

She was born April 10, 1959, in Indianapolis, Indiana, the daughter of Jerry and Nelly Kate (Rippy) Pollard.  She moved with her family to Mannford, Oklahoma, where she graduated from Mannford High School in 1977.  She attended college at Graceland University in Lamoni, Iowa. She later obtained her associate degree in business administration from Allen County Community College.

While at Graceland University, Ms. Pollard met Bradford VanRiette. The two married in 1979.  Together they had sons Gideon and Gabriel. They divorced in 1987.  Ms. Pollard married James M. Rodman in 1988. They later divorced.

Ms. Pollard considered her most important role as that of a mother, though she held a variety of other jobs throughout her life including providing end of life care for ailing individuals and working as a pharmacy technician.  Ms. Pollard was also an active member of her church, where she played the piano, arranged for special speakers, and organized church events.  She spent most of her adult life in Iola, Kansas.

In recent years, Ms. Pollard resided at Delmar Gardens of Overland Park, Kansas.  She is survived by her sons, Gideon VanRiette of Chicago, Illinois, and Gabriel VanRiette and his wife, Janet Pontious, of Lawrence, Kansas.

In lieu of flowers, the family suggests memorial donations to the American Heart Association.  Online condolences may be sent at www.rumsey-yost.com.

Sending love and hugs to the family. I wish I could be there for you during this time.

I am so sorry to hear about your mom. I never knew her but I met her at Gabe and Janet’s wedding. She was very kind and caring. Our condolences are with you.