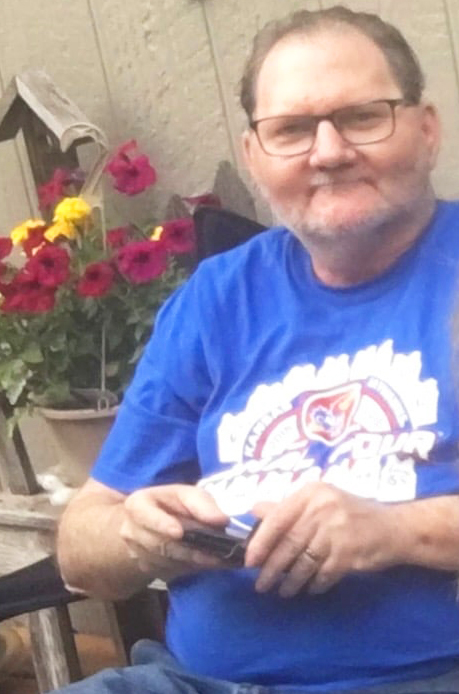 Jimmy was born and raised in KansasCity, Mo. As a young boy he enjoyed summer trips down to Alabama to visit his Mamaw & Papaw Edgil. He fondly recalled soothing sounds of rain coming down on the tin roof of the house where they lived, and the smell of Mamaw’s home-made biscuits. Happy times were shared with aunts, uncles, and cousins, all of whom he stayed connected to until his last able months. He loved them all. Between the ages of 8-10, Jimmy enjoyed Cub Scout activities with his father and brother, where he earned achievement badges for camping and hiking.

After Jimmy finished with highschool, his love of music led him to work as a band & lighting technician for several bands. For over a decade he was able to travel the country with many big named bands such as Shooting Star and the Statler Brothers. In his late twenties, Jimmy returned to Kansas City where he met his wife Marilyn, and resumed his education at Longview Community College to become an auto mechanic. In 1987 Jim became a proud father of his only biological son Joshua Michael Keener.

Highly intelligent and blessed with a quick wit, Jimmy was an encyclopedia of random facts, and well versed on numerous subjects. You would definitely want him on your team for a trivia contest!! Conversations with him always proved interesting and engaging – even hilarious! His hobbies included: cooking, getting and sharing recipes from cooking channels, rooting for KU, Chiefs, Royals, and the St. Louis Cardinals. One of his favorite pastimes was spoiling rotten all of his grandchildren & nieces with pieces of candy and treats he carried in his pockets. He was known to say, “If mom says no, just ask grandpa!”.

Between 2005 and 2014 Jimmy was blessed to be the recipient of 2 organ transplants for which he was deeply grateful. These last years were filled with countless physical and emotional ups and downs for Jim and his family. However, through each unfolding health challenge, he persisted and endured with a positive outcome in mind. He was joined in his journey with the love, support and prayers of his family, as he met each new hurdle with steadfast courage.

His legacy is one of inspiration and hope. When we remember Jimmy, may the strength and Love he has for each of us continue on in our hearts..

What a nice guy. I loved talking music with him. I felt famous cos he was around famous people! A very kind guy.. he fought long and hard. So sorry for ALL the Keeners. At least they are all together. Roll Tide , now that I know! Take care family and God bless all of you!

Marilyn… I am so very sorry for the loss of Jimmy. My thoughts and prayers are with you and the Keener family. I have fond memories of coming to your house and spending time with you and Jimmy. His sense of humor could always make one smile. I miss you. Love and prayers from North Carolina ❤🙏

Thank you Jimmy for taking good care of my mama with good home-cooked meals and sweet treats brought home from the grocery store every time you went.
You fought hard and suffered long… am glad to know you are at rest now with no more pain. We love you and will miss you.
Love to all the family and closest friends near and far.

I’m so sorry to hear of Jimmy’s passing. My thoughts and prayers go out to you and your family Marilyn 💜

Condolences to the family.

RIP Jimmy! I miss our childhoods and the summers y’all would come home to Alabama,, such good memories. Growing older and distance parted us but family love kept us together. Your pain and sickness is gone,, you fought a long battle,, your strength amazed me. Your earthly family has to let you go but what a reunion was waiting for you. I pray for Marilyn and the family to give her strength, she has a hard road without you but God will show her the way. You are forever in my heart and love you much,,,from your favorite aunt in Alabama!! WAR EAGLE!!

We will miss Uncle Jimmy so much. He has fought so hard for so many years and was a fighter til the end! He will be at peace with our family in heaven❤️

My deepest sympathy and condolences to Marilyn, Renda and all the family. Jimmy fought a long hard battle but still had a good sense of humor and a smile. He is finally free of pain and having a great celebration with family. You all have precious memories to cherish what a blessing he was . May God bless you with comfort and peace knowing Jimmy is pain free and happy.

When I think of Jimmy my thought are just how kind he was. We shared the same birthday and got to celebrate it together many times. Jimmy was not as robust as my other cousins but managed to get in to trouble with us. Building families of our own took away from the time we got to spend together, but I know Jimmy will be waiting on the rest of the family to join him so we can be together again. Love you, Danny

My condolences to the entire family, he will be missed dearly. He has been through so much the last few years and he was a fighter. I have many fond memories growing up with Uncle Jimmy. One of my favorites is he took me to my very first concert when I was in 5th grade and infatuated with Peter Frampton. It was at Arrowhead and I thought I was big stuff with my comb sticking out if my back pocket even though I could barely stay awake until the end and fell asleep in the car on the way home- I have always remembered it and it is a great memory I will continue to cherish! Love , Shauna

My sincere sympathy to the entire family. He will be missed but the pain on earth is over. As always love you Cuz.

My sincere sympathy to the whole Keener family. Jim will be at peace now and in no more pain. He will have the best angel to show him around in heaven in “Red”. You will be missed Jimbo. ♥️

Jimmy will be deeply missed by all who new and loved him. You fought the good fight, you won the race. Tell Red we love him. All our love and condolences to Marilyn and the family. And Wanda, it’s Alabama “roll tide.”

I will deeply miss my cousinJimmy and arguing with him about Auburn and Alabama football. I love you Jimmy and I will see you in heaven. Tell Momma hello for me and I will see them ehen it is my time.

I will deeply miss my brother-in-law Jimmy (JW) now that his pain and suffering have ended and he has gone to heaven to be with his Dad, Mom and Steve. I will always remember our times together and discussions about his beloved Jayhawks. My sincerest condolences go to Marilyn and their family.🙏🏻

Heaven gained another angel when Jimmy passed. Condolences to my brothers family. We will all miss him so much. Precious memories to hold in our hearts forever! RIP brother Jimmy! ❤️🙏