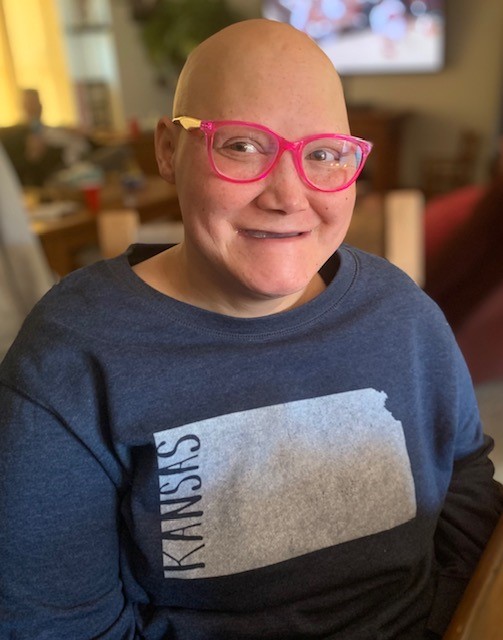 She was preceded in death by her grandfather, Leroy Teichmann and grandmother Velda Falley. She is survived by her parents, Rick and Diane Falley, her siblings, Heather, Candice, Brandon, Richard, Bridget, and Jeanetta, her brothers-in-law, Rob, Shane, Boone, and Justin, her grandma Linda Teichmann, her grandparents Aaron and Judith Falley, her many aunts, uncles, cousins, nephews, and nieces.

Cynthia attended New York Elementary, Woodlawn Elementary, Prairie Park Elementary, South Junior High School, and Lawrence High School, all in Lawrence, KS. You might notice the atypical long list of grade schools- she got kicked out of kindergarten! But eventually our little delinquent found her place and a handful of teachers that loved her well and saw her through to the end, graduating high school in 2015. Friends of the family recall seeing Cynthia using her bike to ride around the halls of the high school. She always seemed to get away with more than the average person. She worked at Cottonwood, Inc., where she had friends and could always look forward to picking up a drink from Sonic after a hard days’ work.

She had a passion for her phone- it was her connection to the world she preferred. The one where the theme song to the hit show ‘ER’ could be played on repeat, where her worship tunes could be blasted, where the pictures of her nephews and nieces were stored, and where she could facetime the same person eleven times in a row. She loved to call her family and friends, even though she never quite mastered the art of showing more than just her forehead in the frame. Receiving a call from Cynthia was always a gamble- would she be sharing important news, or would she be lying about having a doctor’s appointment on “Monday Monday Monday Morning”? Perhaps she was asking when you were coming over, or, occasionally, would be calling you from the toilet and would just laugh and laugh when you expressed disgust. You would never know. But still, we all answered anyway, because you could not quite quit Cynthia. She had that magical pull about her.

While Cynthia may have been limited by her body and mind at times, it had absolutely no effect on her ability to love and, honestly, to hate. If vibes are a thing, she could sense when they were no good. She suffered no fools and was known for her quick and biting commentary to those that offended her. Sometimes even to the people trying to help her! For those fortunate enough, to know and feel the love that Cynthia could give was unmatched. It was like coming home, time and time again. It was an honor to be the recipient of love from Cynthia. She was never stingy or withholding, all you would need is to ask.

Here on earth, we mourn for our beloved daughter, sister, aunt, granddaughter, niece, and friend. But we rejoice in knowing that she is free to dance and sing and delight in the joys that heaven offers her, and we rest in the knowledge that we will see her again someday.

Memorial contributions may be made to the Williamstown Assembly of God Women’s Ministries, sent in care of Rumsey-Yost Funeral Home, P.O. Box 1260 Lawrence, Kansas 66044.

Dear Friends, I am just now seeing Cynthia’s obituary. So very saddened by this for all of you. 😔 My two favorite memories are of her loving her baby doll during Church and especially, driving by your house on my way to work, slowing down if there was no one behind me, putting my window down and yelling “ hi Cynthia “ all while waving like a crazy woman as she waited for the bus on your deck 🤓. I love how she came to know me as “honk honk” ☺️ Much love and prayers for your family at this time. Loretta O’Trimble

When I worked with Diane, Heather, and Candice, it was so beautiful to watch the authentic love and delight you all had for Cynthia and she had for her family and friends. I’m sorry you have to miss her for now, and I’m glad you have rich memories to warm your heart while you look forward to seeing her again. My thoughts are with you.

Cynthia was a big part of South when she attended there. May the Lord comfort you as you mourn and miss her.

Rick, I’m so sorry for your loss! I know you really really loved her!

I really really hope you will be ok! You will have all good memories of her to remember!

I’ve missed you at work! Really really want you to come back!!! I’m going to try to come tomorrow!

Bridget, Justin, kids and all of the family, Please know you are all in my prayers. I’m so sorry for the loss of this very special Person. She was definitely a delight. Her smile was not to be missed. May God wrap his arms around all of you at this time. May you all continue to share your memories with each other, especially those Nieces and Nephews. Love and Prayers Aunt Linda🙏😘🙏

From Denise, Taylor and Megan Posey...

Words cannot express the heartfelt sadness our family feels at the loss of Cynthia. She was definitely everything and more than what was said in her obituary. I will definitely miss her greeting me, whether I be “Posey” or “Megan’s Mom” every time I saw her. God blessed her with a wonderful, full life and a family who loved her beyond words and whom she loved back. Megan, Taylor and I were so blessed to be her friends. She will truly be missed. Our love, thoughts and prayers are with your family.

Its ironic how we met in kindergarten and so did our babies…both gone at the young age of 25. I hope they have found each other again and Cynthia is giving Dalton those big hugs she always gave him. I’m just so sorry you have lost a child too. We are not suppose to bury our children but God has his own plans. I love you my dearest friend and your family. Love and God Bless you all.

I am so sorry for your loss. I worked with Cynthia when she was at Prairie Park. It is breaking our hearts. She always made us smile.

Rick and Diane, Kathi and I are so grieved at your loss and will miss Sissy’s lovely smile even when Pudge peed on her! Looking forward to seeing her soon along with my folks and your mom.
All our love

Dear Brandon and the Falley Family,
Our hearts and prayers go out to you and your family. Please know that your EuroTec family is thinking of you during your time of grief. May you all find strength and comfort in one another.

Dear Falley Family: I met Cynthia in the fall of 2010 when I was a music therapy intern in USD497. When I met her, we immediately bonded. I’ll never understand why she trusted me, but I am so lucky that she did. I learned more from your daughter in those 7 months than I thought possible, and have bonded with independent, strong, hilarious clients ever since! I was so sad to hear of her passing, and have been so fortunate to read how much she touched us all. Sending you lots of love- Morgan

So sad to hear of Cynthia’s early passing on to Heaven, but will look forward to seeing her again and hearing that familiar greeting of “Hey, Papa Randy !!!”

I am so sorry to hear of Cynthia’s passing. I was a para at Woodlawn and had the opportunity to work with Cynthia. She was definitely one of a kind. My thoughts and prayers are with your family.

Dear Falley Family I am holding you all close to my heart. May you all find peace and comfort during this difficult time. Thank You for sharing your sweet young lady with the rest of us. I will always remember Miss C!

Diane and Rick, my heart is broken for you and your family in the loss of your dear Cynthia. I know that she has left a huge hole in your lives and in your hearts. May you all find peace and happiness in your memories of her and may she be at rest. Fly high and free Cynthia!

In my first job out of high school as a supervisor in Cottonwood Inc.’s Work Enrichment I worked with Cynthia. She brought so much joy, energy, and chaos to stir up the otherwise notably ‘calm’ South Room. I added so much Backstreet Boys to my Apple Music playlists, and I will never forget the time she found my phone in the room and asked Siri to play her favorite, ‘Bye Bye Bye.’ Oh how I loved to sing with her. She called me “Meena” and I was blessed to hear her sing-song “Meena, Meena, Meena!” just like her own “Falley, Falley, Falley!” jingle on a daily. Cynthia brightened some of my hardest days and never failed to surprise me and the room, and get a laugh out of us when we needed it, with her hilarious, quick-witted and nonsensical comments. Cynthia is a cherished part of my young adulthood and has had a giant impact on my patience, understanding and celebration of everyone’s quirks and differences. She loved to take selfies on my phone, and I can’t help but smile through the tears at her adorably contagious smile going through the photos these past couple days. While I try to get my thoughts together, I can’t fathom the loss for Rick and Diane, Cynthia’s siblings, and her nephews she loved so dearly. To the family, I am sending you my love and keeping y’all in my prayers. Cynthia was truly one of a kind.

sorry for your loss of Cynthia

Rick and Diane I am so sorry to hear about Cynthia’s passing. She has always had a special place in my heart and will be missed greatly. Your family is in my prayers.

I am so sorry for your loss. Cynthia was a good kid. She always was fun to transport. I remember being the Para on the bus and I had to bring my 1 year old with me. She was so excited that there was a baby on the bus. She kept saying “baby poop” and then giggled. She will be miss by many. Fly high sweet girl.

I came across this I’m so very sorry for your loss my prayers will be with you all ❤️. No parent should have to bury their children before them. I’m so sorry I have tears in my eyes even tho I don’t know her

We were so sorry to hear of Cynthia’s untimely death. She brought great comfort and love to her family and will be missed.