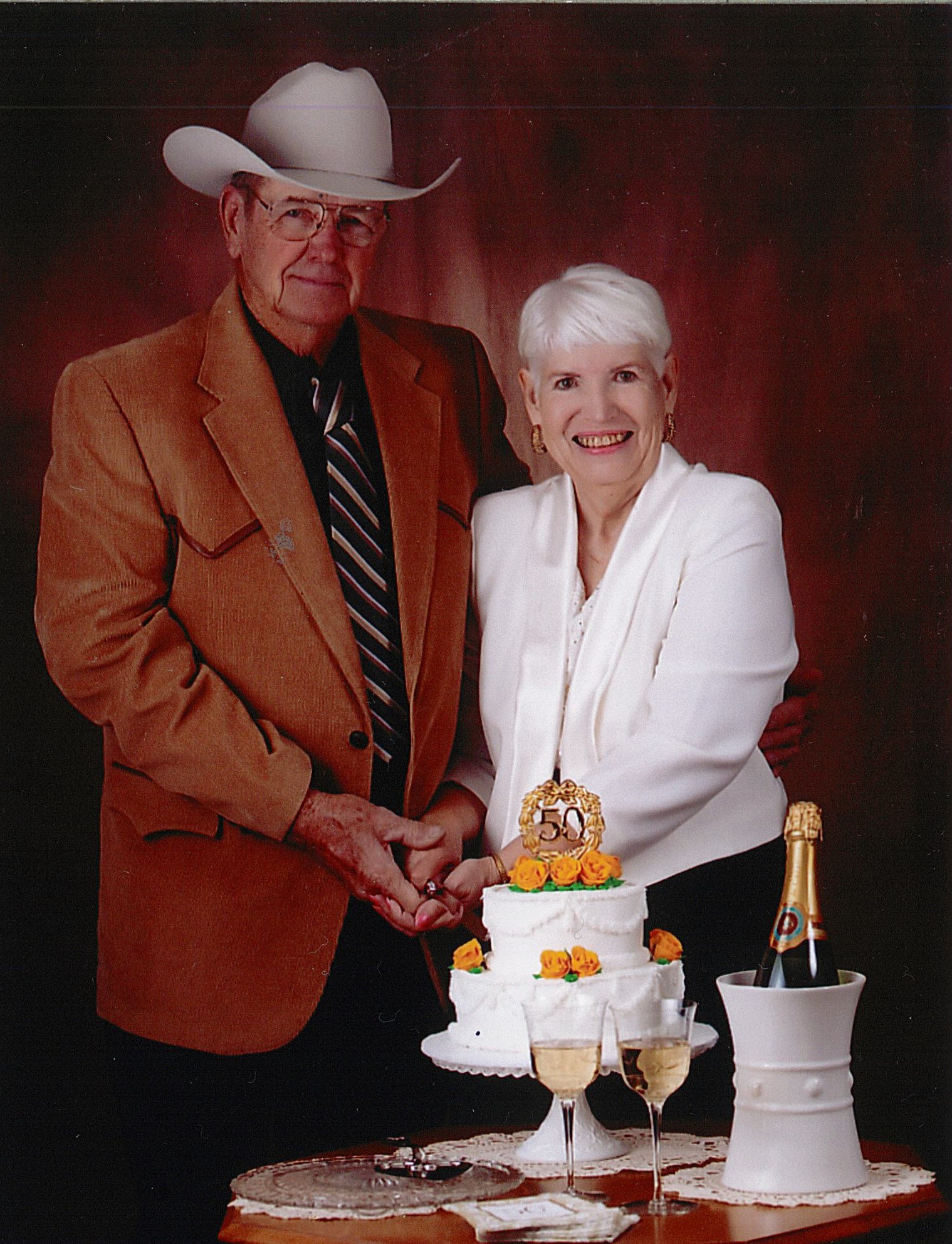 Gloria Marie Leonhard (Gram) was a caring wife, mother, grandmother, sister and friend. Gloria was called home on January 30, 2022 at the age of 79.

She was born to Harry and Laura Kennedy on December 10, 1942 in Topeka, Kansas. Growing up she attended the 1 room schoolhouse Deer Creek Elementary, was a member of Clinton Presbyterian Church, participated in youth fellowship group and 4-H. After graduating high school from Lawrence High she attended Baker University and studied Business then graduated Clark School of Business.

In 1966 their daughter Gina was born, and in 1991 Gina married Bryce Schumann.

Through 57 years of marriage Gloria worked both in Lawrence and Topeka as an office manager/clerical secretary for a Law Firm and at the KS Legislature, and in the home Ranch office. She retired from work with USDA in 2008. Gloria never hesitated jumping in to do her part in the building of a life, a home, a family and the Ranch, through “better or worse”.

Gloria served as a community leader for the Stull Busy Beavers 4-H club for over 10 years, as well as helped with the Stull United Methodist youth fellowship group. She loved spending time going through recipes and in the kitchen making wonderful meals for her family. Over the years, many of Gina’s friends frequented the table, and then went on to the next generation. Gina and Bryce’s 4 kids Wyatt, Dylan, Jessye and Kassidy (Gram’s grandkids) and their friends frequenting the table.

Gloria answered to the name Gram from many, many young friends beside’s her own 4 grandchildren and enjoyed them all ever so much.

Gloria played the piano and organ proficiently, her past piano teacher actually made a record of two of her compositions “A Cheer Leaders March” and “Rippling Water” she started all of her grandkids on the piano at a young age.

Gram’s passion, drive and love were her husband Ralph, her family and the Ranch and especially those grandkids!

Memorial contributions can be made to the (ARI) Autism Research Institute, in care of Rumsey-Yost Funeral Home, PO Box 1260, Lawrence, KS 66044.

Ralph it really shocked me to find out that your wife had passed. I am so sorry and I know she will be missed.

Ralph –
I am so very sorry for your loss.

Ralph,
Condolences and peace to you and yours.

Ralph and families
Wherever a beautiful soul has been, there is a trail of beautiful memories. You and your families are in our thoughts and prayers.

So sorry for your loss. Blessings for your family. Linda & Jon Ingalls

Ralph, Gina, and family, we are thinking of you and the family in the loss Gloria. I pray and believe that she is at peace and that your precious memories will sustain you. 🙏

Ralph and Family:
I remember Gloria working for the legislature years ago when I worked at Legislative Research. She was a very kind person. My family knew Harry and Laura Kennedy and also the Kropps. My thoughts and prayers are with you at this difficult time.

Ralph and Gina – So sorry to hear of Gloria’s passing. I know that leaves a great void in one’s life. I fondly remember many adventures with Gloria and the “girls”. Make your memories last forever.

Very sorry for your loss, my prayers are for your comfort and peace.

So sorry Ralph to read of your loss of Gloria. Prayers & Condolences to you & your family.

Ralph, I want to express my sympathy for your loss, and for the loss to your family and community of such a wonderful person. Peace be with you, Janet

Our annual Douglas County Fair encounter commenced with a warm smile and an asking about our girls from Gloria … always! Since childhood Gloria made me feel like family & it’s how I felt about her! Something foundationally comforting in that! Forever grateful! May the fond memories of Gloria’s life be warm and comforting companions to you in the days to come! All kinds of love, friends!

Gloria was a special person who will be fondly missed by all who knew and loved her. Prayers and condolences to the family.

Thoughts and prayers, Ralph.
Losing a spouse is heart breaking.
May the Lord wrap his loving arms around you and give you peace. 🙏🏼✝️

Those blessed with exceptional mothers find it more difficult to say good-bye. Glad for the memories she helped all of you make.

So sorry Gina. The loss of a parent leaves a big void. Thinking of you. Sue

We were sorry to hear of Gloria’s passing. She was a wonderful patient. May her memory forever be a blessing.

Love you sis, .. you were often my guide post. May our Lord hold you close and bring you comfort and peace
My heart goes out to all family and dear friends.
Til we meet again .. our love is eternal.