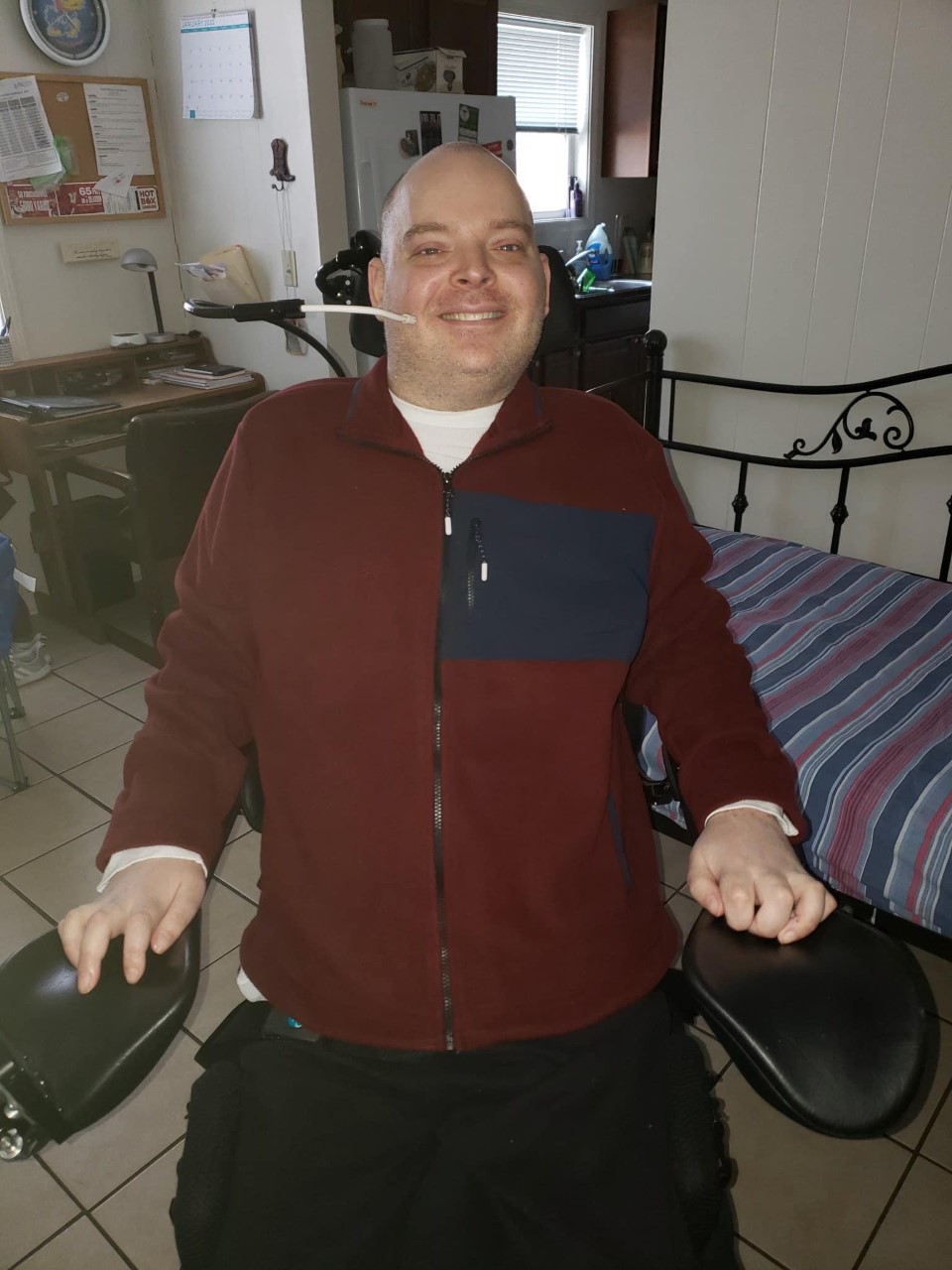 Services for Dustin David Thorne, 42, Lawrence, will be 10am Saturday, February 12, at Rumsey-Yost Funeral Home.

In deepest sorrow, we announce that Dustin David Thorne, our beloved son, brother, family member and friend, passed away on February 1, 2022 while in the hospital.  Dustin grew up in Fayetteville, Arkansas and attended Fayetteville High School.  He moved to Kansas in 1996 and graduated from Jeff West High School in 1997.  Dustin attended the IBEW electrical apprenticeship technical school in Topeka where in five years he earned his journeyman license.  On October 10, 2004, Dustin was severely injured in an ATV accident rendering him totally paralyzed.

In his 17 years as a quadriplegic, Dustin showed great strength and courage through his advocacy to other paralyzed individuals sharing his story and words of wisdom.  He loved KU basketball and KC Chiefs football, and always kept the Arkansas Razorbacks near to his heart.  He belonged to many online group clubs which included a chess club that he shared with his Uncle Jack, and a KU Sports group. Dustin always had an encouraging word and never gave up on anyone, especially himself.

Dustin is survived by his mother, Bonnie Wiest and her husband, Butch; Bill Thorne and his wife (Sarah), his brother, Christopher Robeson and his wife Straucie, his Grandma Jan Emmons, his stepbrothers Cory Wiest and Dylan Wiest (Mariah), his aunt, Debbie Dechant and her husband, Bob, his uncle and aunt, Jack and Margrit Thorne, Jane Thorne Sullivan (aunt), Susan Wiest (aunt), his niece Lilly Dobbs, and many others including uncles, aunts and cousins.

Dustin loved and appreciated his caregivers over the years, especially Linda who devoted so much of her own time in taking care of him, especially during his most difficult days.  He trusted her and loved her.

Dustin was strong in his faith and went peacefully as Jesus called him home.  He spent many quiet times alone in prayer.  Those who knew Dustin, even if just for a little time, loved him.

In lieu of flowers, memorial donations may be given to Rumsey‐Yost Funeral Home & Crematory, in care of Dustin D. Thorne.

John 3:16 – For God so loved the world that he gave his one and only Son, that whoever believes in him shall not perish but have eternal life.

Bonnie – I am so sorry to hear about your son. He sounds like an amazing young man. God bless you and your family.

Bonnie, Although we only got to know Dustin for a short time, we are so grateful for the time we had. He was such a fun, care free, & loving man. Dustin is now whole again and walking the streets of gold. We are holding you in our hearts and prayers for peace, strength, comfort & healing. If there is anything we can do or you need to talk we are here for you. Hugs to you. ❤️🙏❤️🙏

Bonnie and family, Dustin has long represented a sense of strength, determination and love for life that even for those of us that only knew him through you, could feel joy through his smile in photos; courage to face whatever comes our way through knowing his story his story and how he chose to live life to the fullest; and love for self and for others though his example of how one should love. I know I can speak for all your WW sisters, that you and Dustin are now and always in our hearts. Love Danielle

I have felt sorrow ever since the night of Dustin’s accident. I am thankful that his pain and suffering are over. Rest in peace my dear boy.

Dustin was one of the most purely happy people I ever had the pleasure of knowing. Always the first with a funny joke, warm, loving, and truly a warm and welcoming soul. I feel so blessed to have known Dustin. My deepest sympathies to his family and countless friends who will miss him forever.

My thoughts and prayers are with Dustin’s family and friends. I’m thankful that our paths crossed when I was employed at Independence Inc. Dustin had such a kind and giving spirit. He always brought a smile to my face when ever I saw him. A bit onary as I remember❣️Recently we kept in contact through Facebook. I will miss my friend!

Our sincerest condolences. Dustin was an important member of Independence, Inc. and always a smiling face when he was in the office. He had such charm and charisma. He was a wonderful advocate in the disability community and will be missed by all.

Sorry for your loss. Dustin was so wonderful and kind. When I was conducting my thesis which involved observing behaviors in a parking lot in Checkers. Dustin kindly offered to help me. We sat in his van for an hour doing the observation. He helped me collect data by saying it out loud and then having his care attendant write on paper. Good memory that I will treasure forever.

Bonnie, sincere condolences to you and your family. We greatly appreciated Dustin and how with kindness and humor he provided peer support to other individuals with disabilities, and worked for positive change in the community. With love and gratutude.

Bonnie, my deepest sympathies to you and your family. What a wonderful child. May your memories and prayers bring you peace.

Bonnie, Please accept my deepest condolences on Dustin’s passing. What a beautiful person he was with a great spirit and steadfast endurance. Peace be with you and your family.
With love, Gwynne Birzer

Bonnie and family so sorry for your loss. My thoughts and prayers are with you in this time of sorrow.

Bonnie, Ron and I are sending our deepest sympathy for your loss. Dustin was a wonderful young man who always was so cheerful and had a smile for everyone around him. The world was a better place with him in it; he will be greatly missed.

Bonnie, we love you and know that your faith in God will carry you and the family through your grief. From everything I have heard Dustin was a blessing to all who knew him. Wish I had the opportunity to know him better. Love and hugs to all. Your Cousin, Pat

You were one of the good ones for sure! You was strong and fought hard always. Love ya man! I am gonna miss you so much! FB is gonna be tough to get on now for sure! Love ya D! To the moon and back

With the grace of God Dustin is now healed. Jesus please lift the vail of sorrow and give strength to the family and friends Dustin left behind. God bless you Dustin.

I was honored to have known my fellow advocate, colleague, and friend, Dustin. I recall inviting him to speak to a group of KU students and how well they connected and were drawn to him. Such a warm and kind soul, and such a loss for our community. RIP, Dustin. ❤️

My sincerest condolences to all of Dustin’s beautiful family! Take comfort in knowing that Dustin is with God & in no more pain. Love you all!