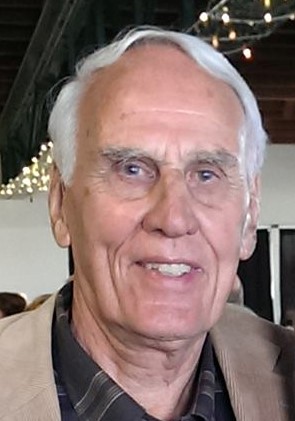 Bill was born on January 14th, 1930, in Slaton, Texas with his twin brother James Albert Lienhard to Leon Victor Lienhard and Ruth Barner Lienhard. His father was with the Santa Fe railroad and they lived in a number of different towns before settling in Newton, KS. He graduated from Newton High School in 1948 where he had straight A’s and his basketball team went undefeated until they lost to Lawrence High School in the state finals. He was the leading scorer in the state and a member of the All-State team. Upon graduation he went to the University of Kansas to play for Phog Allen. He joined the Phi Delta Theta fraternity where he lived for four years. He had an academic scholarship and majored in Finance in the Business School. He was a member of Sachem, the National Honor Society. He started for three years on the KU basketball team. His 1952 basketball team won the National Championship in Seattle, WA, where he was a second team all American. His team went on to the Olympics in Helsinki, Finland where they won the gold medal in 1952. After graduation he served two years in the Air Force as a training officer and was discharged as a first Lieutenant. Having majored in finance he went to work for the Fourth National Bank in Wichita, KS where he became Vice President in charge of the Correspondent Bank department.

In 1990 Bill was senior Vice President in charge of the commercial loan department and a member of the bank’s Board of Directors where he remained until he retired when he turned 70.

Bill accomplished so much in life, but one of the greatest accomplishments was his devotion to his family. He cared for his son, Eric, after a tragic car accident. He brought Eric to church, KU football and basketball games and numerous outings. His three girls greatly admired his devotion to his wife, Jeanine, who was limited to a wheelchair the last ten years of her life. He became her loving caregiver, full time, until 89 years old. He did the grocery shopping, laundry, cooking and he became proficient at all of them.

We also want to give a special thank you to Beth Robbins who was Jeanine’s devoted caregiver and stayed on with Bill allowing him to remain in the home until his passing.

A mass and funeral will be held at 1 pm, at Corpus Christi Parish on Friday, February 25, 2022. After the service he will then be laid to rest at Memorial Park Cemetery where his wife Jeanine, son Eric and grandchildren Kyle and Kelsey are buried. A reception will follow until 5 pm at the Lawrence Country Club.

In lieu of flowers, the family would encourage donations to Corpus Christi Parish, Boys and Girls Club of Lawrence or the Brain Injury Association of Kansas, sent in care of Rumsey-Yost Funeral Home, 601 Indiana Street, Lawrence, KS, 66044.

To the Lienhard family- Randy and I will be thinking of you today as you lay your father to rest. He was always such a gentleman and kind to me when I asked him to autograph my Jayhawk memorabilia! This is a loss to our community and Jayhawk Nation. The accomplishment of the 1952 KU basketball team and Olympic team were happy memories for my father who was on campus at the same time. Take care, Ruth Anne Sneegas

From Gary and Vicki Murrison...

We lived close to the Lienhard family, and our kids were good friends. We send our condolences to the whole family.

To Julie, Betsy, and Amy:
I want to remind you of just how much I valued the opportunity to coach the three of you. You were all outstanding young ladies. However, I also want you to know how very much I treasured my association with your parents. Just as you were excellent role models as student-athletes, your folks served in the same capacity for our L.H.S. Parents. Your father was so well known for his athletic accomplishments, and such a respected member of our Lawrence community. It was certainly a privilege to have him in the stands during our competitions. I will always remember him as the caring, supportive parent that he was to all of his children.
My deepest condolences for your loss.

I officed next to Bill at First National Bank for a number of years. Bill taught me a great deal about banking and life in general. I will always remember him as a gracious person and consumate gentleman.

To the Lienhard family, I’m so sorry for your loss. I knew Bill best as a wonderful dad and grandfather to his kids at St. John school.

To the Lienhard Family
Our hearts and prayers are with you all at this time! When we came to Lawrence in 1994 Bill was one of the people who befriended me and I will never forget his kindness and his wanting me and my organization to succeed! He was a giant in athletics as we all know, but a gentleman personally and I think that made him special!
Rest In Peace Bill you have had a lasting impact on all of us!!
Our best,
Miles and Paula Schnaer and the Crown Automotive Organizaion

To the Lienhard Family, thoughts and Prayers in this time of Loss of such a great man. Always a good conversation with Him whenever I visited 1St National Bank. Plus fond memories of the camping experience at Lake Perry many moons ago. Take care and God Bless

So sorry for the loss of your dad. I know how much you will miss him.

Bill was one of a kind—always smiling, always positive and someone you always looked forward to being with. One of my favorite jayhawks.

My thoughts and prayers are with you during this very difficult time. May the memories that you shared together bring you comfort and peace. And know that your Dad will always be with you. Take care of yourselves and each other. God bless you!

I am so sorry to hear of Bill’s passing. He was a friend, a fellow KU athlete, and a loyal K Club member. I will always cherish and respect his advice and friendship to all of us Jayhawks. My condolences to all in the Lienhard family.

Bill was one of my childhood heroes. It is rare to count a childhood hero among your friends, but I was fortunate enough to do that. He was a real gentleman and role model.

We were so sorry to hear of your loss. Thoughts and prayers to your family

Dear family of Mr. Lienhard, on behalf of the Bong family (sons of Bob & Sylvia Bong), our sincere condolence and sympathies to Julie, Betsy, Amy and families. We have fond memories of the Lienhard and the friendship that grew while we lived in Lawrence and even after we moved on. May God bless you in abundance during time of sorrow and may He comfort and heal your pain and sadness, and may all of you find comfort with all the fond memories of Mr. Lienhard.

To the Lienhard family, your dad was such a treasure! My parents adored both your folks. I’m so sorry for your loss. Much love Mary T Schnellbacher-Decker