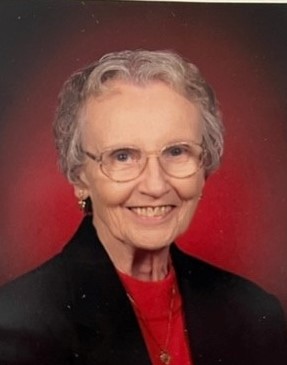 Jeanne was born on April 10, 1929, in Omaha, Nebraska to Dr. George S. and Naomi O. Brancroft. She grew up in Pollack, South Dakota and Scottsbluff and Omaha, Nebraska. After graduating from Omaha South High School in 1946, Jeanne met Ronald E. Buskirk while attending Hastings College. They were married in Omaha on August 16, 1948. Jeanne and Ron moved to Chicago for Ron to attend McCormick Theological Seminary. Jeanne graduated from Roosevelt University in 1950.

Initially, Jeanne taught elementary school in Park Forrest, Illinois. Shortly after, she and Ron moved to Wakefield, Nebraska. In addition to supporting Ron in the six churches he served, Jeanne taught elementary and special education in Holdrege, Nebraska, Grand Junction, Colorado, and Derby and Mulvane, Kansas. Ron and Jeanne retired to Lawrence, Kansas in 2001 to be near their younger son and family.

Jeanne will be remembered as a dedicated and kind teacher, devoted and generous mother, and friend to all. Her love and dedication to her family and her steadfast faith in God were the hallmarks of her life.

Dear Family,
I met your beloved Jeanne at the JC Penney salon many years ago. What a sweetheart she was! Always smiling and willing to chat with all of us. We will miss seeing her at Designers! She was a bright light to so many people.

I will keep you all in my thoughts and prayers as you grieve the loss of Jeanne.

Paul, I was saddened return home after a week away to find out that your mother had died. My thoughts and prayers are with you and your family during this time of mourning.

Paul, I am so very sorry to learn of your mother’s passing. I will keep you and your family in my prayers

Paul, you and your family are in our thoughts.
Val, Beth, and family

Paul, I am saddened to learn of loss of your mother. May the good Lord provide comfort to you and your family always.

Paul, thinking of you and your family. I am sorry for you loss.

Paul… So sorry to hear of your mom’s passing. Thinking of you.

I am so saddened to hear of Jeanne’s passing, I have many fond memories of working with her as a Para in Mulvane, KS. My condolences to the family. You have lost a dear lady!

Paul and family,
Barbara and I are saddened by your loss. Please know that we are thinking about you and know you are comforted by your faith and friends. All best.

I’m so sorry Buskirk family! Mom/grandma was a wonderful classy lady and she will be missed! My thoughts are with you at this difficult time!