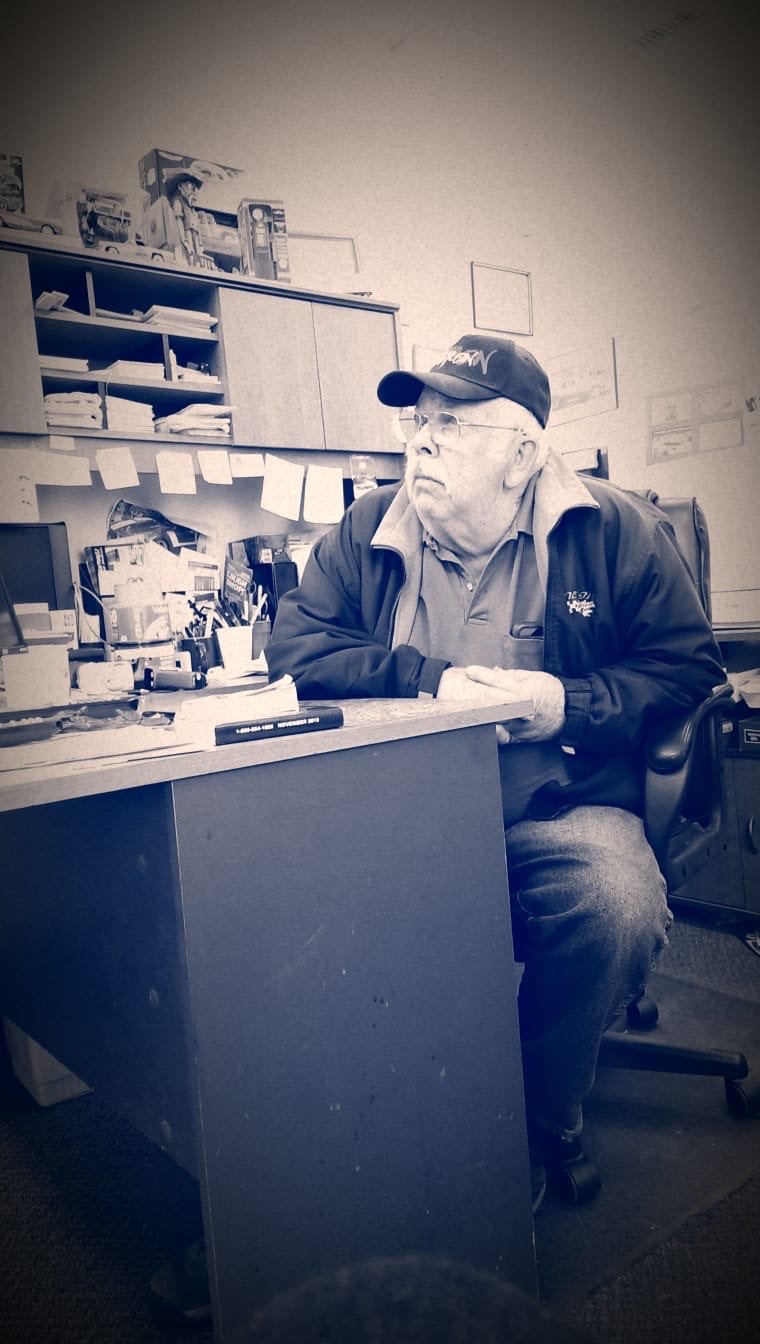 Services for Elmer Jesse James Jr., 79, Lawrence, are pending and will be announced by Rumsey-Yost Funeral Home.

Elmer Jesse James, Jr., 79, of Lawrence, KS, passed away on April 4, 2022 surrounded by family and loved ones at Lawrence Memorial Hospital.

In February 1974, Elmer started a family with his wife Judy. Depending on which one you asked, their anniversary was on the 23rd (Elmer) or the 24th (Judy) of that month.

Elmer was preceded in death by his parents, Elmer Sr. and Kathryn and his brother Larry.

Elmer was born on August 15, 1942 to Elmer Sr. and Kathryn James in Omaha, NE. After graduating from Lawrence High School in 1960, he went on to work in the automotive industry for the rest of his life. He owned and operated James Gang Automotive and James Gang Auto Sales for over 40 years, the last few years working closely with his cousin Larry. After “retiring” in 2021, Elmer went on to continue to tinker on anything with a motor in his home repair shop.

Elmer did not only fix cars, but he also raced them all over the Midwest, including at the Lawrence Dragway and Midwest Raceway in Manhattan, KS. Elmer continued racing well into his 60s and was a dedicated NHRA and NASCAR fan who would get into spirited debates with his family and friends over who was the best racer.

In addition to all things cars and racing, Elmer was also a sports enthusiast and was often found cheering for the University of Kansas Jayhawks, the Kansas City Chiefs, and the Kansas City Royals. Although Elmer passed before the Jayhawks won their most recent national championship, his family is sure he was cheering on the ‘hawks from above and questioning the referees strongly.

Elmer didn’t just watch sports though, he also was an avid fisherman going on multiple trips a year with family and friends to Minnesota and Arkansas. He also bowled and passed along his love of the game to his children, including bowling league with his two sons. Other hobbies included, gardening, watching his kids play sports, and plowing snow for his neighborhood.

Elmer was a devoted husband, a loving father, and a loyal friend and neighbor. He will be missed by all who knew him, but will never be far from the hearts of his loved ones.

The James family would like to thank the amazing doctors and nurses at the Internal Medicine Group at LMH Health. Doctor Christopher Brychel took wonderful care of Elmer over the last few years and they will always be eternally grateful. Additionally, the Jameses want to thank Doctor Rebecca Smith for her compassion who cared for Elmer in the last few days of his life. The family would also like to thank Bob and Patsy Moody for their support during this difficult time.

A service to honor this great man will be on Sunday, April 10 at 2:00pm at Rumsey-Yost Funeral Home. A visitation will follow directly after the service around 2:30pm.

In lieu of flowers, please send memorial donations to Rumsey-Yost Funeral Home (P.O. Box 1260, Lawrence, KS 66044). The family will designate to sponsored charities that were close to Elmer’s heart.

We may not have it all together, but together we have it all. We love and miss you, Elmer, Jim, Elmo, Dad, Pop, Grandpa, Papa.

I got to know Elmer from being in the car business for the last 40 years. It was so much fun talking to him at the car auction where he would sneak up and pinch me hard on the back of the arm. The best stories were of his dirt track racing days at the jalopy track and all of the tricks to make the cars go faster. I have missed seeing him at the auctions in the last couple of years and didn’t realize he was seriously ill. He didn’t carry on about his health. He will continue to be missed but the memories help warm our hearts. We are all better for having known Elmer!

Dear Judy, Dale Jr, kids, and the rest of the family, I am so sorry to hear of Elmer’s passing. Being a cousin, I always knew and referred to him as Jimmy.

Mom and I spent a lot of time at their old home place on 7th Street. Jimmy was always extra quiet, and off to himself, where Steve and Gary weren’t. Judy was always talkative, and still is.

I do know this, not only your family. your extended family, along with friends and Lawrence, KS, will miss a pretty great guy. There will be an empty place in North Lawrence forever. He always reminded me of his daddy, at home or at the shop. He always will.

You are all in my prayers. Send love and condolences to all of you.

From The Lister Family...

To the entire James family our hearts go out to you at this time. So sorry for your loss of Elmer. He was a big hearted man, always shared a story or a joke to pick anyone else up. He will be missed but not forgotten may Elmer rest in peace.

James family I will miss Elmer I called on him in business for over 40 years we always I joyed our Wednesday chat great friend.

Judy, I’m so sorry for your loss. I’m thinking of you and your family and sending my sympathy.

From Tom and Rhonda Aeby...

We are so sorry for your loss. We are thinking of you.

My deepest sympathy to the James family.

Elmer will be missed. He was so special to Dr. Brychel and I. Our thoughts are with you.

From Robbie and Fran Johnson and Kids...

So sorry. I had brought my and my kids cars to Elmer for 30 some yrs.. He was a very honest man and always fix our cars and never had to take then back. Always enjoy visiting with him on any subject. He was a good person and always try to help anybody when they was having a hard time.

From Robbie and Fran and Kids...

So sorry. I had brought my and my kids cars to Elmer for 30 some yrs.. He was a very honest man and always fix our cars and never had to take then back. Always enjoy visiting with him on any subject. He was a good person and always try to help anybody when they was having a hard time.

I am so sorry to hear about Elmer. He was quite a character, and I enjoyed all of my conversations with him. I know he will be missed.

Elmer was like a 2nd dad to me growing up …I spent 50 % of my time at the James’ house growing up. He will truly be missed my SO Many. So Many Great Memories with Dale at the Lawrence Dragstrip. Thoughts and Prayers for Dale, Misty, Jesse and Judy.

From Ann and Bill Neuschafer...

My condolences to the entire family a fellow bowler and friend

We are so sorry for your loss. What a wonderful family. We always enjoyed the time we were with him at the family events. Take Care.

Fran, Travis, Gabe & Corey Hopkins….
Our hearts and prayers go out to your family. What an amazing man. I know Terry will be having fun now in heaven talking cars and doing some fishing with Elmer.

So very sorry to hear about Elmer. He was a great person.

So sorry to hear of Elmer’s passing. He was a great boss to work for at the auto parts store. Super nice man. R.I.P. Elmer.

From Bill and Dorothy Smith...

So sorry for your loss. Prayers and hugs sent your way. ❤️

To the James family I am so sorry for your loss. I’ve have been good friends with Elmer since the mid-70s and I have so many good memories of the things we’ve done together. Whether it was helping each other out on our projects or just calling to check up on each other you couldn’t ask for a better friend.
God bless and RIP Elmer

Heart felt sympathy sent from NB Canada. Misti, Roger and Lexi. So sorry for your loss. Hugs and prayers.

I just met Elmer back in September on a fishing trip to Minn. Loved all his stories he would tell. Will miss him. RIP Elmer.

Sorry for your loss. Elmer was a special person and I had some good times with him in Minnesota. He will be missed

I knew Elmer, many years ago. He was very kind to me and my family at Ma & Pa cafe. I played a many a game of pinball with him, I always thought he let me win. I am sorry for your loss. The world was a better place with him in it. Rest in Peace My Friend

From Bill and Shang Shepard...

Judy, We’re thinking of you

Judy & Family: I was so sorry to hear of Elmer’s passing. He was such a great guy and helped me so many times. Our family will miss him so much. My thoughts and prayers are with you and the family.

From Bruce and Debi Howard...

Sorry for your loss, I have many memories that will never be forgotten. Elmer was a great person and will be missed. Our prayers go out to all of you.

Misty, Roger, and Alexis – We are so sorry to hear about the passing of Misty’s dad. We know this is such a hard time losing your parent, and we’ll be thinking of you. John, Karen and family

Judy, Misty and Jesse,
So sorry for your loss, it’s an extremely difficult time and my prayers are with you. Elmer was my best friend and I will always remember our times together for the last 50 or so years. He will be missed and thought of many times

Judy& family
So very sorry to hear about Elmer! He was absolutely a awesome guy and will definitely be missed!!