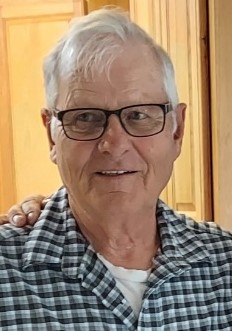 Jack was born on April 19,1938 in Mountain Grove, MO, the son of Margaret (Halliburton) and Archie Virtue.

Jack was a 1956 graduate of Mountain Grove High School. He retired from Farmland Industries after 34 years.

He looked forward to morning coffee with the guys. The love of his life was fishing. He also hunted with his buddies. Hanging out at Clinton Marina and helping around the dock was a favorite pastime. Conversing with all the fisherman and getting the insights on where the fish were hiding. He also enjoyed traveling. He was a Jack of all trades… pun intended and true! He cherished spending time with family and especially fish fries at the lake. He enjoyed making and eating homemade ice cream and never ever got a brain freeze in his life. He loved going dancing with Hazel, which is how they met. The two-step and the waltz were some of their favorite dances.

He was preceded in death by his brother Russell and sister Charlotte; his wife Beverly Jo Virtue; son Monte Virtue, and grandson Bryon Virtue.

Jack was loved by all who knew him and never met a stranger. He will be greatly missed.

The family will receive friends at 10:00 a.m. prior to the service at Rumsey-Yost Funeral Home. Memorials may be made to (Leukemia & Lymphoma Society – AML) in care of the funeral home, PO Box 1260 Lawrence KS 66044.

I’ve recently started a site, the information you offer on this web site has helped me greatly. Thank you for all of your time & work.

From Wayne and Bobbi Kellum...

We are so saddened by the lost of Jack. Due to the rising of the Covid we will not attend the funeral. Our thoughts and prayers will be with you during this time.

So very sorry to hear this Rick! Our thoughts and prayers are with you & yours!

We are so sorry for your loss.
We were out of town or would have come to the service.
Prayers to all the family
❤️Bill Hegeman and Steve and Becky Grammer

We are so sorry to hear of Jack’s passing. He always had a kind word and a smile. He will be sorely missed. RIP Jack!

Jack, worked at farmland with Bud, they were good friends at work
And outside of work, he will be missed by all that knew him,
So sorry for your loss, jacks smile will be lightly up the heavens.

Jack has been such an important part of the Foley family, he will be sorely missed by all. To know Jack was to love him. He never met a stranger. May he Rest In Peace.

I’m very saddened by the news of Jack’s sudden passing. He was a good friend to all who knew him. Leo worked with Jack for many years, & valued his friendship. Sending condolences & prayers for you all.

I’m very saddened by the news of Jack’s sudden passing. He was a good friend to all who knew him. Leo worked with Jack for many years, & valued his friendship. Sending condolences & prayers for you all.

Love to the family. Jack was one of a kind and a loyal friend. He will be missed.

My condolences to Jack’s family, I met Jack when he first came to Lawrence in the 50’s when we were high school kids with fast cars and belonged to the car clubs of Lawrence, the Crusaders and The OutKast’s, a lot of water under the bridge since then, but we have always kept in touch through coffee shops and other get together places, Jack will be missed, RIP old friend. We will fish and bench race again sometime

Condolences go out to the family, our thoughts and prayers are with all of you. He loved telling his fishing stories and was a friend to all he met.

Jack was our neighbor for many years when we lived northwest of Lawrence. He was a really pleasant, nice man. He helped stock our pond with bass and crappie – he loved to fish. I’m glad I got to know him. RIP.

Jack was always there at the right time. Always a family friend, a cousin to be proud of. Dad thought a lot of him.

Our prayers are with Jess and her family and Rick. Jack was a wonderful man and enjoyed being with his family in everything they do. He will be missed by everyone who knew him.

From Gloria (Holladay) and John Musick...

Our thoughts and prayers go out to all Jack’s family and friends. His friendly, outgoing personality will leave a void in our lives, but we can be comforted in knowing he has gone to a better place and we will one day be with him again. He certainly did a lot to make this world a better place.

Jack was all ways a very family man. The ‘family’ meant so much to him. He will be missed by many people! Prayers for the family.

Prayers are with you Hazel and family Jack loved his family so much. He will be missed by all the friends he has made along the way.

Jack was a good man, I have many good memories of all of us at Uncle Joe and Aunt Dorothy’s. May he be at peace now free of pain. I know he will be a busy man visiting many family members.

Sorry for your loss , Rick Monty and Tam.
I worked with your dad for several years .