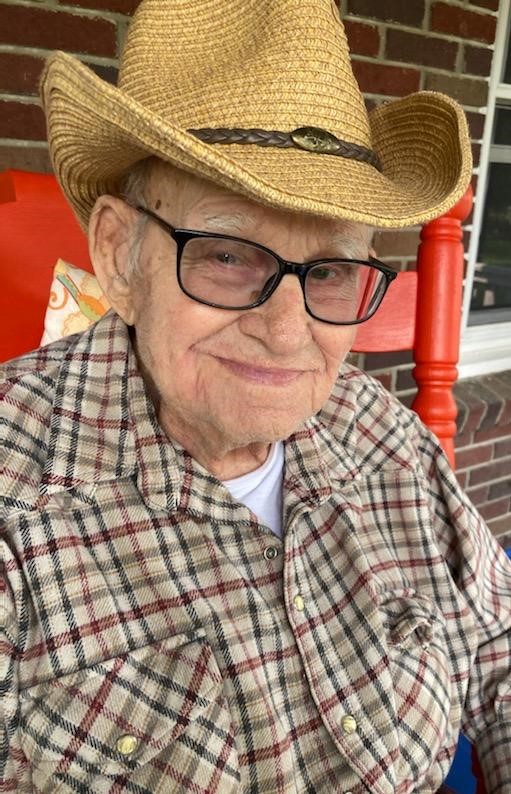 Bob was born on January 31, 1924, in a rural home northeast of Perry, Kansas, the son of Albert Ayer Rose and Bessie Button Rose. After attending Buck Creek and Perry schools, he worked on local farms. Later, he enlisted in the U.S. Coast Guard and served on the USS Wakefield during World War II.

After returning home to Kansas, he married his lifelong companion Leda E. Ridlon on October 20, 1948, in Yellville, Arkansas. They had a farm in Clinton, Kansas, then moved to Lawrence when the Clinton reservoir was built. Together Bob and Leda shared 64 years of marriage. She preceded him in death in 2013.

Bob was a heavy equipment operator and proud member of Operating Engineers Local 101. He retired in 1988. He loved raising horses and delighted in watching passersby admiring the ponies in the pasture at his home in east Lawrence. He and his Shetland ponies would draw a crowd when they pulled a wagon through local streets and walked in local parades. Bob was a big sports fan and spent many years as a youth baseball coach. He also enjoyed competitive team calf roping, dancing with Leda, camping, boating, trotline fishing, reading and watching Westerns, and spending time with grandchildren, great-grandchildren, extended family, and a large network of friends.

A memorial visitation will be Thursday, 6-7 PM, at Rumsey-Yost Funeral Home & Crematory. Memorial contributions may be made to the Lawrence Humane Society, in care of the funeral home, 601 Indiana St., Lawrence, KS, 66044.

http://m.lawrence.com/weblogs/locals-and-yokels/2010/feb/21/neighbors-bob-rose-his-farm/?templates=mobile
I’m heartbroken to hear of Bob’s passing, he was a true gem. I wrote of him in a local blog years ago, the link is posted here. my thoughts are with all of your family and sending a big hug to Becky.

Monte, Sharon and family- We are so sorry about your loss.

We wish you and your family our deepest condolences

My Mom lived a couple of block from Bob’s. We would take my son’s to his house to see his horses. He was such a nice man. Deepest condolences to his family

I loved my uncle bob so much! He was a sweet and sassy man that had so much love to give. His hugs were heartwarming and his laugh was contagious. I will miss him very much!

Uncle Bob was always good to us kids! We cud catch him sittin on his porch many a day walking home from junior high! Took us all home by horse n wagon one time! We felt as special as he was!! Rest In Peace uncle Bob.

Uncle Bob was a wonderful man. I always looked forward to seeing him. Especially sitting on his front porch for the last several years. I Admired his service to us all during WW11. A fine man from great stock that raised a super family. The best to his family.

From Charlotte A Hastings...

One of the most kind hearted person I have ever known. My uncle Bob is loved by so many and will be missed by so many. May God speed All the Rose Family to be at peace at the loss of the one they love.

Sorry for your loss Becky and family.

My favorite “picture” of cousin Bob was sitting on a horse smoking a cigar. He was always so happy to see us. Many well wishes and prayers to his children.

I’m greatly saddened to learn of Bobs passing and I’m sorry for your loss. I loved your parents deeply. Bob is one of the best men I’ve ever known.

My deepest condolences to you and your family.

I am so sorry to hear of Bob’s passing. I have so many fond memories of him and Leda at Trail Riders, BBQs and other activities as I was growing up. I imagine they are dancing up a storm right now!

I am so sorry for the whole family. Much love being sent your way.

From Jarrell and Maureen Sharp...

We are so sorry for your loss. Bob was such a special man and he will be missed!