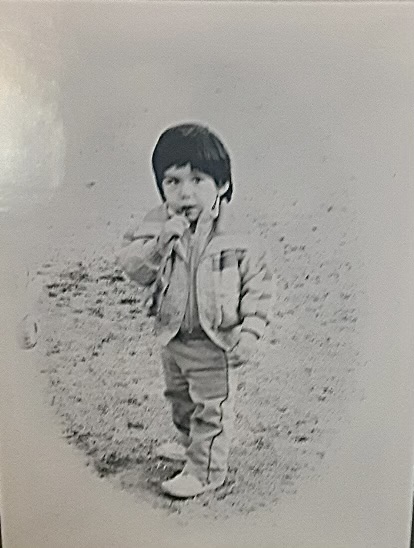 A Celebration of Life for Ryan Matthew Romero, 39, of Oskaloosa, will be Sunday April 24, at 2 p.m. at Rumsey-Yost Funeral Home.

Ryan went to be with the Angels on April 18th at Heritage Gardens Assisted Living with his family by his side.

He graduated from Lawrence Free State High School and from there he went to Flint Hills Job Corps, where he learned his carpentry and framework that he did. Ryan at times held 3 jobs down until M.S. took his ability to work.

Ryan loved doing puzzles, fishing, looking through change for old and unique ones. He had mastered writing calligraphy and using the Old English Style and was amazing at this. But his true passion, pride and joy was his daughter. Oh how he lit up when Anna was with him. They had a standing Friday night dinner date at Applebee’s. They were truly a wonderful father-daughter duo.

He is survived by his daughter Anna of Quenemo, as well as his mother and father, Rebecca and Dale James, and father and mother, Mark & Lori Romero. Ryan was blessed with five brothers and four sisters, Mark Jr. (Amber) of Richmond, Angela (Kasey) Keck of Raytown, Joshua, Frankie, Samantha Nicolas Manny (Victoria) all of Lawrence, Laken James of Lawrence and Kristina James of Reichelscheim, Germany. 24 nieces and nephews and one great nephew, and his maternal grandparents, Issie, Corinna Bermudez & paternal grandma Lazara Romero all of Lawrence.

He was preceded in death by his paternal grandpa, Frank Romero, his aunt Marylou Pierce and cousin Alicia Chavez.

The family suggest memorial contributions be made to the Anna Romero Educational Fund, or Heritage Gardens Assisted Living of Oskaloosa.

I am deeply sorry for your loss. Ryan will be missed.

Dale and Becca, my deepest sympathy to you and the rest of the family for your loss

I am so sorry for your loss. My deepest condolences.

From Kala Banks and family...

Sending condolences to the family. Our hearts are with you all.

Sending love to all who loved Ryan. I’m sorry for your loss.

Our deepest sympathies for Anna and the family. Ryan has always been a beacon of wisdom and bravery.

So sorry for your Loss Mark and Lori. My prayers are with you! Love you

Sincere sympathy in your loss. Thank you for allowing PrairieWind Hospice to know and care for Ryan. It was our great honor to care for him.

So sorry for your loss. Ryan was a good neighbor in our apartment complex. We will miss him. Prayers and thoughts to his family.

I’m very sorry for you loss, prayers for everyone he loved. God Bless

We are so sorry for your loss and thankful for the silver lining that Ryan’s suffering has ended. You’re all in our thoughts and prayers.

MY condolences to the family

To Mark and Family….So sorry for your loss… May he rest in peace…

We are so sorry for your loss. we love you guys!

My condolences to Ryan’s family. I’m so sorry for your loss.

From Bill and Dorothy Smith...

Sorry for your loss. Thoughts and Prayers