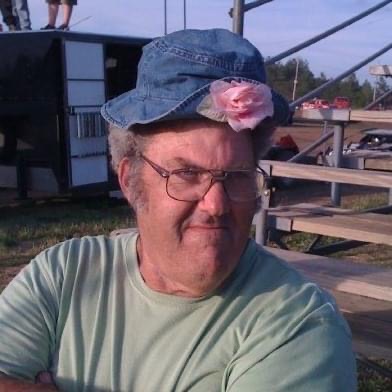 James Raymond Powell- Jim Powell Sr. 76 of Lecompton Kansas, Passed away on May 4th 2022, from complications with pneumonia at his home surrounded by his family.

Jim Sr. Was married to Penny Powell who passed away February 2001 of Cancer. Together they had a Son James Powell Jr. Who cared for both as they passed.

Penny had 2 children who Jim Sr. Loved as his own. A daughter Sherry Bullock of Olathe Ks who passed in 2002, and a Son Jerry Maple of Elsinore Californian.

Services will be held at Rumsey-Yost Funeral Home 601 Indiana Lawrence Ks. On Saturday May 14th. Viewing is from 12-1pm with services to beginning at 1pm.

Jim Sr. Will have an open casket followed by Cremation where he will in part be buried next to his wife Penny at Maple Grove Cemetery in Lecompton and part spread at his favorite race tracks.

Memorial Contribution’s may be made to Jim Powell Sr’s Funeral cost care of Rumsey-Yost Funeral Home with any remaining going towards his granddaughter Brooklynn Powell’s college fund.

To the Powell family, we extend our deepest condolences to you on the passing of your loved one. Sending prayers !

Our deepest condolences. May your father, grandfather, father in law rest peacefully in the open arms of the lord.