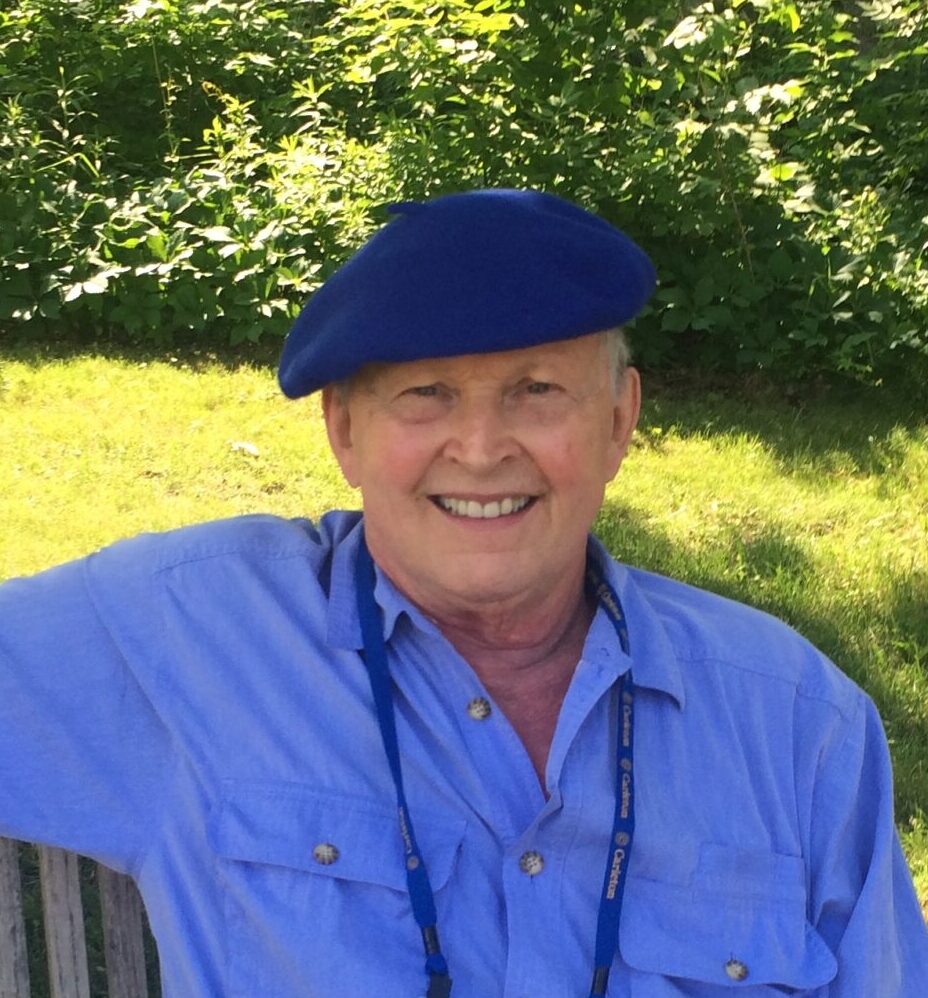 Bob Kent died unexpectedly on July 4, 2022 at Lone Star Lake doing what he loved—swimming. He was born on March 16, 1941 to James B. and Lucy Ellen (Beal) Kent in McMinnville, Oregon. His family moved to Kansas City, Kansas, when he was eight. He graduated from Wyandotte High School and went on to earn a B.A. in Religion from Carleton College, Northfield, Minnesota. Bob was a competitive swimmer at both Wyandotte and Carleton, where he was on a student work grant.

He met Kay Jones in 1964 on a blind date arranged by Kay’s nursing instructor, who was married to Bob’s high school friend. Bob and Kay were married on June 3, 1966 in Kansas City, Missouri and recently celebrated their 56th wedding anniversary. Bob went on to finish his Masters of Divinity from Andover Newton Theological Seminary in Boston. They moved back to Kansas where Bob earned a PhD in American Studies from the University of Kansas.

Bob and Kay wanted to stay in Lawrence, where Kay was the director of the Lawrence-Douglas County Health Department. Faculty positions within commuting distance were hard to find. A friend recommended that he apply to be a firefighter. Despite being older than most recruits, Bob at the age of 43 passed all the physical tests and in 1984 he joined the Lawrence Fire Department. Bob was the only firefighter in the history of the department with a doctoral degree.

Being a firefighter allowed Bob to pursue independent research as well as serve as an adjunct researcher in the Departments of Special Education and American Studies at the University of Kansas. He also taught courses and seminars on American history, political science, and civic professionalism. His academic interests included critical social theory, education and democracy, American liberalism, and social justice.

During his 20-year career with the Lawrence-Douglas County Fire and Medical Department, Bob was a lead negotiator for the local union of the International Association of Fire Fighters (IAFF), a member of the advisory board of the IAFF Hazardous Materials Training Project, and a grant reviewer for the U.S. Department of Energy training grants through the National Institute of Environmental Health Sciences. He was instrumental in changing the way the union negotiated with the department. When he retired from firefighting at the age of 63, he was believed to be the oldest firefighter in Lawrence to actually hang off the side of the truck and run into burning buildings.

Bob was an avid reader and lifelong learner. He loved good food, cooking, hiking, dancing, traveling, listening to classical music, working out, and spending time with family and friends. He was a member of the Lawrence Masters Swim Club and the Mad Dogs and Englishman running group. Bob was well-liked and a loyal friend. He treated people kindly and was nonjudgmental. He was described as “all sunshine” when he entered a room. A person like Bob does not come along very often and he will be greatly missed.

Survivors include his wife, Kay, brother Jay Kent (Carol), brother-in-law Wendell Jones (Charlotte), sisters-in-law Wanda Jones and Willene Arthur (Lawrie), and several nephews and nieces. He was preceded in death by his parents. A Celebration of Life is planned for Friday, August 19 at 2:00 p.m. at Arterra Event Gallery, 2161 Quail Creek Dr., Lawrence.

Mary Kaiser is inviting you to a scheduled Zoom meeting.

My dear old friend is gone but he will not be forgotten. I’ve known Bob since 1955. We swam together on Wyandotte’s swim team. We also worked as life guards at Mission Hills Country Club. I still laugh at some of the capers we did back then. We kept in touch over the years and always enjoyed a few beers when we could get together in Kansas City.

We had similar interests and over the past few years we had been reading books that the other had recommended. Our discussions were quite lively and mutually beneficial.

Bob had a probing intellect, an unquenchable thirst for knowledge, unshakeable loyality, and an infectious laugh.

Farewell friend, I will miss you.

Kay,
Bob will be so missed! I never knew he went to theology school. I would have enjoyed conversations with him about that. I will always remember you and Bob at Christmas time.
I loved him sharing the time in his highschool swimming meet where he was watching his opponent from the side line and then he froze up from the bleachers. It made me laugh every time. He was a great man! And I am glad he was my God Father💗
I’m so sorry to all of his friends and family.
Love you, Bob

Kay and family,
Bob was my customer but not only that he was a fantastic Friend and a Great, wonderful, kindhearted Man. I will deeply miss him. I’m So Sorry for your loss
Love Vicki Goff-Miller

Kay I am so sorry to learn of Bob’s passing. What a life he lived and partnership you had. Prayers are with you.

I first met Bob at Wyandotte High school. We were on the swim team together and spent time out of school listening to classical music. We took a camping trip to Washington state when we were in our early 20s. I have many memories of our great times together and I will miss him very much. Sincere condolences to Kay and the Kent family.

A good friend and he will be missed. Rest In Peace

I am saddened to hear of Bob’s passing. During the years that he was frequently on the KU campus, my former co-workers and I got to know him well as a regular customer of the general book department of the KU Bookstore. As noted by others, he was a bright note on any day, a great conversationalist, and a true gentleman. My condolences to Kay and family.

Kay I was so sorry to read of Bob’s passing. My Husband passed last Oct and then I moved to Lawrence. I live at Meadowlark Estates. I live near my son and his wife.

Duke was a kind and passionate friend. He loved people and ideas. His ability and willingness to express his feelings and ideas were exceptional. Bob was great fun on long car trips and always had a positive comment to share. He was truly one of the finest people I’ve known. I will miss him. My condolences to Kay and his whole family.

My condolences, Kay, on the loss of your beloved partner. I only met Bob a couple of times, briefly at functions, but he was a kind and true gentleman. Our thoughts and prayers are with you.
Bob and Celeste Trepinski

Bob and I were classmates at Carleton College, but I mainly got to know him later. He was a tremendously warm person. Besides a visit to his and Kay’s home in Lawrence, we had very enjoyable times together at several Carleton reunions. The passage in the obituary that especially resonated with me was “He was described as ‘all sunshine’ when he entered a room.” I’m very sorry for our collective loss, and especially for Kay’s.

Kay and family,
We were saddened to read of Bob’s death. Even during tough negotiating periods, Bob always treated me with respect and a smile. He was an asset to our community and one that will be sorely missed.

I knew Bob/Duke as part of that collection of grad students in sociology and related subjects who hung out together in the late 1970s. I probably spent the most time with him in the context of various academic conventions we attended. I always enjoyed the time spent with him, as he was invariably genuinely warm and decent, even while in passionate argument. At the time I was too young and ignorant to realize how rare was his capacity to express and defend passionate belief without giving any sense that you had to agree to enjoy his friendship. He stood out in our group of friends for telling groups of us how much he loved us, something the rest of us felt but weren’t able to verbalize. I regret that I hadn’t had the chance to see him in several years.

Duke had passion, energy, intellect and enthusiasm. He helped me with my dissertation, editing numerous drafts. We had especially rich times at the Midwest meetings over the years. I will miss him and his infectious laughter and smile.

I chaired Bob’s KU PhD dissertation, He was thereafter a committed independent scholar who read intensely, engaged ideas seriously, and loved intellectual exchange and combat. We shared ideas, laughs, and wine for many years. Bob was a passionate, kind, and generous human being, loved and respected by his friends. I already miss him. So sorry for your less Kay…

Terrible shock. Such a Renaissance man. Had so many multifaceted skills. Condolences to family. RIP.

Oh my. I am saddened to hear of Duke’s passing. In all the years I knew him, Bob always had a smile for me, wether we were talking politics, wine, food, or swimming side-by-side in the pool. He left us doing what he loved to do. Bob was as fine a human being as one might be lucky enough to meet. My sincere condolences to his family and friends.

What a shock. Bob was a gentleman and one of the nicest people I have had the pleasure of knowing. Bob was a great athlete and he will be missed as a loved member of the Mad Dogs and the community. My condolences to Bob’s entire family.

I was so surprised and saddened by Bob’s passing. He and Ed were life-long friends–both passing very suddenly. Please accept my deep condolence, and if Ed were here he’d say the same. Bless you in this difficult time.

My deepest condolences for your loss. I first meet Bob when I was in graduate school at KU in the late 1970s. We attended many professional meetings together and shared may good times in Lawrence. In recent years, we corresponded on shared academic interests. He was a wonderful, kind, caring, and passionate person. He will be deeply missed.