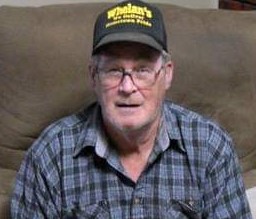 Graveside services with military honors for Willie Holladay, 75, Rolla, Kan., formerly of Lawrence, will be at 10:00 am Saturday at Clinton Cemetery with the Rev. Debbie Garber officiating. Willie died Thursday, June 13, 2019, at his home in Rolla.

He was born September 1, 1943, in Lawrence, the son of Elmer Eugene and Mary Ruth Dressler Holladay. He attended Lawrence schools, and later joined the United States Army during the Vietnam War as a door gunner for the 162nd Assault Helicopter Company, and earned the Vietnam Service and Campaign medals and the National Defense Service medal. He worked for the University of Kansas for many years in various capacities, retiring in 2008 as a brick mason. He was a life member of the Veterans of Foreign Wars Post 852, Lawrence. In his spare time, he enjoyed golf and watching westerns.

He married Dolores Ann ‘Dee’ Warmker on June 17, 1991, in Nashville, Tenn. She preceded him in death in 2018. He was also preceded in death by four sisters, Delores Guy, Ella Souders, Bertha Daniels, and Eugenia Mullens.

The family will receive friends from 7-8 pm Friday at Rumsey-Yost Funeral Home.

For the first few years after we met (1970) , I called you Willie like everyone else did. Then one day I started calling you Dad. Thanks Dad for the fishing and hunting trips, camping on the muddy banks of the Deleware River, letting me help fix the car or the house. Thanks for being there while I grew up. Thanks for the Colorado trip and the two Ozarks trips. Thanks for letting me know you were proud of me and loved me without actually saying it. I’ll miss you. Love Doug

My sympathy to the family and friends of such a nice man. God bless and RIP.

I am so sorry to hear of Willie’s passing. Even though we haven’t been together for a while, he brings back so many memories of Uncle Gene and childhood hours spent with him and his family. Sincere sympathy for the whole family. Gloria Kaye (Holladay) Musick

Prayers to the Family, will always remember

So sorry to hear about Willie. We had such good times with the and Willie at the VFW they were both always full of fun. We also enjoyed a lot of funny comments on Facebook with each other. He will be missed

Had a lot of fun times playing softball with Willie, RIP.

I wish peace for Willie’s family. A man with a smile and joke to share with anyone, someone who a lot of people called friend.

I’m so sorry to hear about Willie passing. My thoughts an prayers are with you all.

I am so sorry for your loss. I had not seen Willie for sometime but he was family.