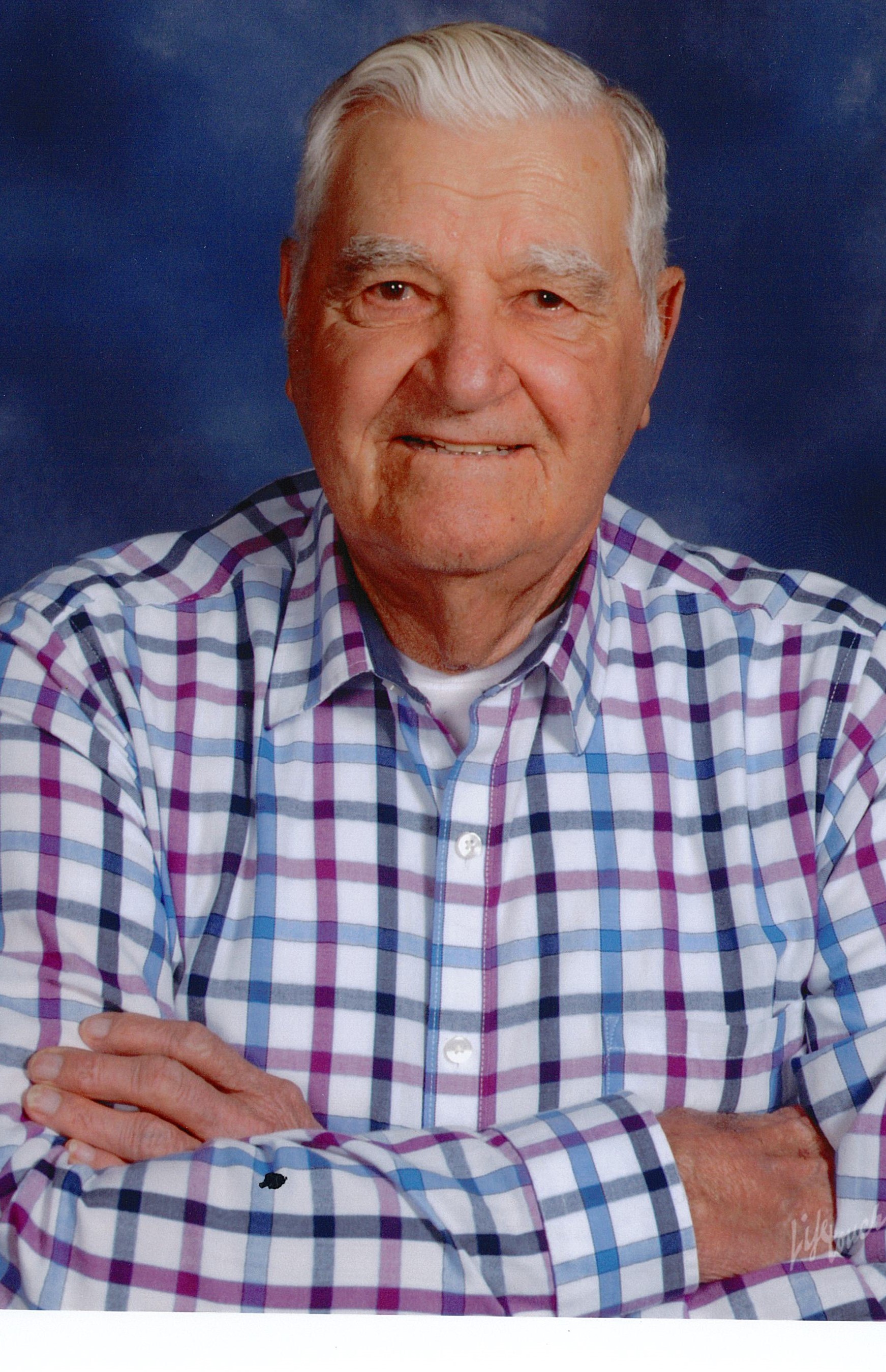 Leslie was born January 12, 1930, in Clinton, Kan., the son of Russell and Ada Goff Harrell. He attended Barber Elementary School and Liberty Memorial High School. In Lawrence. He entered the United States Air Force in 1951 and served three years stationed in England. In March of 1954, he was awarded the Soldier Medal for Valor. After returning from the service he began a farm operation in the Clinton and Lone Star area. Skip spent his entire life in Douglas County. He retired in 1995 and enjoyed helping his son Mike with farming, fishing at Clinton Lake and hunting. He and Helen spent many years wintering in the Valley of Texas. He was a lifetime member of the Baldwin City Lloyd Beaton Post 229 of the American Legion, and a member of Worden United Methodist Church.

A private memorial service with military honors will be held at a later date at Clinton Cemetery. The family suggests memorial contributions to the Clinton Cemetery, for repairs and cleaning of the stones, or Douglas County Visiting Nurses, in care of Rumsey-Yost Funeral Home, 601 Indiana St., Lawrence, KS, 66044.

From Jerry and Denise Coatney...

Helen, we are sincerely heartbroken to hear about Skip. Denise and I have always felt very close to your family. The morning coffees, picking. cherries, Skip telling fishing strategies, Cheryl babysitting Jesse and Emily. We will never forget your generosity.

Aunt Helen,Twilla and Mike: Im so sorry that Uncle Skip has passed on. Im sure he is with Cheryl looking for a good fishing hole. I remember Skip best form my child hood.He was always playing a joke or telling some story with such a straight face. We wouldnt know what was going on till you saw that certain smile that would come across his face. He will be missed by many friends and most important his loving family. Know that anything you may need is just a phone call away. Thinking of all of you.

Helen and family remembering you at this time of loss.

Dear Helen,
I was so sorry to hear of Skip’s passing. Skip will be missed by so many people. Our thoughts and prayers go out to you and your family.

Dearest Helen and family. Sending all my love to you and prayers that the Lord will comfort you at this time. I have such wonderful memories of being at the house with Twilla and Cheryl and Mike and all those kiddos that you took under your wing. We are all better people for having you in our lives. God bless and keep you. Know that you are loved by many, especially this gal over here.

Hope the Fishing good in Heaven.

Prayers for the family.

From Stan and Marge Waller...

Twila, I am so sorry to hear of your loss, may the lord be with you and your family at this time. Our prayers are with you.

I am so sorry to hear about Skip’s passing! I grew up knowing Helen and Skip, school with Twilla and Cheryl. Love and prayers for all of you!!!

Hellen, Twilla, David, Meghan, John and family,
So sorry to hear about Skip in church on Sunday. I know that he touched many lives and that he will be missed by many! Our thoughts and prayers are with you all! The Wren’s

Helen and family, so sorry to hear of Skip’s passing. We enjoyed visiting with him and you all. He will be missed by many!

From Mary Jo and Bud Hadl...

Dear Helen we’re so sorry to hear of Skips passing. Our thoughts and prayers are with you and your family. Hug’s to you.

Dear Aunt Helen and family, I am so very sorry for your loss. He was an Uncle I looked up to and I have many good memories to cherish. I love you all and wish I could be there to give you a hug! Know you’re in my thoughts.❤️

Helen and family I am so sorry to hear of Skip’s passing. I always enjoyed spraying for him and Mike and jealous of his fishing. Sorry for your loss.

Aunt Helen, I am so sorry to hear about Uncle Skip. I hope you know how many people you have helped when they needed it and touched many lives. I am here for you and will never forget how you and Mom Joan got me through my Mom’s passing and just took over the meal and preparing for memorial. Ihave a peace about Skip because I know we will see him again soon. You have so many wonderful memories to think about till then. I love you and will continue to keep all your family in my prayers. Love and sympathy~Lisa

From Michael, Cindy, Jordan and Heather...

Dearest Hellen, we are so sorry to hear about Skips passing, I wish we had been able to spend more time with you all before he had gone. I will miss the humor he always seemed to have bubbling just below the surface, he was truly a good man, all our love…

Helen,
So sorry to hear about Skip’s passing. Hugs & prayers to you & your family.

To the Harrell family, I am sorry for your loss. I went to school with the Harrell kids and remember coming to the Harrell house with Cheryl. Thinking of you.

From Dorothy and Duane Wulfkuhle...

Helen, so sorry to hear about Skip, our thoughts and prayers go out to you and your family.

Helen, I am so sorry to hear of Skin’s passing. You are in my thoughts.

MargE & I send our love and prayers to you during this difficult time.
I was sadden to learn of Skip’s passing, as I know he will be greatly missed by all those who knew him. There are no words to say that will take away the hurt and pain, but may the great memories and good times shared with Skip, help to comfort you and your family during this time.

Dear Helen,
Joan and I send our love and prayers to you and your family during this difficult time. We hardly know where to start to convey our thoughts of Skip today. We shared so many wonderful times together over the last 60 years, especially the camping trips to Texas to beat the brutal Kansas winters. It was on these trips that Skip tried to teach Bob and I the proper way of filleting fish. It was mighty intimidating, having the “master” watching over our shoulder, trying not to cut Kikuyus through the rib cage! I will also greatly miss our pregame and halftime analysis of the KU basketball games. Many times when the Jayhawks struggled to play well, Skip would always come up with a new game plan to get the coach and players back on track! The one thing I will always remember about Skip, is when it came to family, farming, fishing and fun, the “Skipper” will always be number one!

Helen and Family, We are so sorry for your loss, and we will miss Skip dearly. Love and prayers for comfort.

From Emmitt Reed and family...

Helen , we are so sorry to hear of Skips passing. Our thoughts and prayers to you and your family.

Helen so sorry to hear about Skip. It was always great to visit with him when we had the opportunity to come to your place. You are in our thoughts and prayers. Greg and Carol Howard

Helen and family. We are so saddened by the loss of Skip. He was a great neighbor and friend. Without Skip, we would have not found our land where we now live. Sending love and support. Sympathy to you all.

Helen and family so sorry to hear of Skip’s passing. He will be missed by all . My prayers are with all of you.

From Joe and Wanda Herschell-Gaggero...

Helen and family, am saddened to here of Skips passing. Our thoughts and prayers go out to each of you.

Helen and family so sorry to hear about Skip . He will be greatly missed. He was quite a guy.