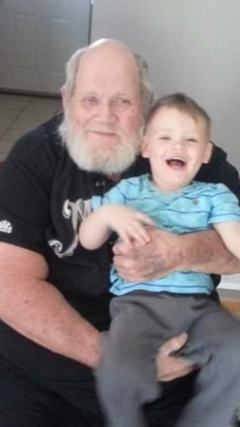 He was born Mar. 3, 1947, in Lawrence, the son of Matthew L. and Mary L. Sourbee Barnes. He graduated from Lawrence High School.

Jerry worked with his folks at their Texaco station on 6th Street. He later worked for R.W. Harmon & Sons, Lawrence Freight Line, and later became an owner/operator truck driver. He was a big man with a kind heart who would help anyone in need.

Survivors include his son, Jake, and his grandson Liam, both of Oklahoma.

I will never forget our friendship and all the conversations we had before Bud and I married, and after. I still stand amazed of what good friends you and Bud became. You were always like the brother I never had, always watching over me, and offering advice. As time went on miles limited our relationship, but never in our hearts. Many times, even yet today, I think of you again. Oh, but the way…I am not sure if I ever gave your house key back to you from years ago. Thank goodness, I never had to use it, but it was nice to know I had a safe place to crash if ever needed.For now roll on big buddy, another load must be delivered. Be sure and keep it between the lines. Patti and Bud Hatch

From Tim and Holly Daniels...

You will be greatly missed! RIP Papa Smurf! You will always have a special place in our hearts!

You will be missed. You could write a book. Lawrence was good old times back in the day!!

Jerry you sure will be missed.the fun we all used to have in the mudding pulling Coors man and Gail out of the mud hole and fixing the chili supper that helped bring them together. All the late nights and party’s making Hails kids the Santa Claus cake if I remember right there was a lot of Jack Daniels drank back then and you talking me in to getting my hair colored a champagne blonde. I think a lot of school was missed. You will definitely be missed. Love you big daddy and that was on his tag

From Terri and Jay Schendel...

OPERATOR FLIRTING WITH DISASTER: Jerry / Big Daddy was an amazing man, I feel so blessed to have gotten to spend 37 yrs with him.Jerry was always there for many that needed a helping hand.We had many fun times and boy could he tell the stories. Jerry was a long time truck driver he loved to get behind the wheel and head out. Jerry has { PARKED HIS BIG RIG FOR THE LAST TIME HE’S HOME. }Jerry will be greatly missed ,No tears your last {WISH} came true your home{ R.I.P. REST IN PEACE NO MORE PAIN} LOVE YOU BUNCHES ALWAYS DAD.

From Howard and Gail Funk...

Jerry was such a big part of our family was Santa Claus to our girls and we had lots of fun with the 4 wheel drive club and he even was instrumental in Howard and I getting together by inviting us both over for chili on the same night. He stood up for us when we got married. Jerry would do anything for anyone and yes the stories he could tell when he and Howard used to hang out at the station. We’ll all miss him RIP Big Daddy.

I knew Jerry in High School. I really liked him. We both were into race cars and several of us would hang out at the Texaco at times. I respected him a lot.

Jerry was a wonderful neighbor and friend who was always ready to help with anything. We will miss his smile, his fun conversations, and his kind heart. We love you, Jerry.

My sincerest condolences to the family. He was such a proud father and was so delighted to be a grandpa. Everytime I would see him he beamed from ear to ear, bragging about his boys. He could sure talk your leg off too.
“Uncle Jerry” had the biggest heart and it showed in his kindness to everyone he met. There sure were some Great times to be had around him. Sure miss those times when my dad and everyone got together at Jerry’s, and all the stories they told!! Boy could they tell ’em.
Hope he’s up there having a drink and reminiscing with his old pals about The Good Ol Days.
You will be missed, but never forgotten.
-Mandy

From Keith and Francine Steiner...

Jerry was a great friend. Always smiling. Wr will miss him.

We will miss Jerry’s smile and friendship. Loved seeing him drive the Pontiac to car shows!!

You will be missed!! What a big ole sweetheart!!

From Rod and Sharl Spillman...

Our thoughts and prayers for the family. Jerry was so much fun in our 4wheeling days. Awesome heart loved us all.

Condolences to Jake and his grandson. Jerry truly was a kind man, we got to know each other in high school and became friends with similar interests in cars and later both of us working in the trucking industry. I remember spending Saturday mornings at his Dad’s Texaco station with several other friends tinkering with our cars, He will be missed to all who knew him.
Rest in peace my friend.