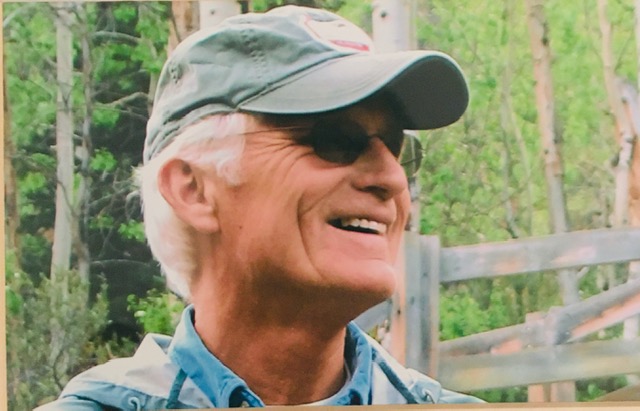 Known to childhood and young adult friends and family as “Duane,” but to made-later adult friends as “Leslie,” he passed on October 30 at age 82 following multiple brain bleeds.

Duane was an artist, a teacher, a social worker, a runner, a Citizen Band Potawatomi and a Marine. Although he was quiet by nature, he had a delightful but quirky sense of humor enjoyed by his family, friends and colleagues. He and Betsy Franken Evans noted their 60 years of marriage in August of this year.

Upon receipt of his BFA from Oklahoma State University, Duane taught for a few years at St. Gregory’s High School in Shawnee, Oklahoma, the school from which he graduated. He spent a year in the National Teacher Corps in rural Kentucky while pursuing a graduate degree. The Prairie Band Potawatomi benefitted from his efforts in and around Mayetta before he enrolled in a second master’s program at Kansas University. He and his family farmed for several years on an organic farm near Tonganoxie; he worked briefly as a consultant for Native American Research Associates as well as a social worker at Bert Nash Community Mental Health Center in Lawrence. Duane finished his professional life after 15 years of teaching art at Haskell Indian Nations University.

In retirement, Duane and Betsy traveled, kept a busy social schedule and cared for their pets. Montana, Glacier Park and the Bob Marshall Wilderness Area were his favorite destinations.

Duane was preceded in death by his son, Josh, his mother, father, two sisters and a brother, two aunts and a grandmother who raised him, and his best friends Jim Spurr and Ed Hays.

A service for Duane will be on Saturday, November 2 at Rumsey-Yost. Viewing at 2:00; service at 3:00; reception to follow at a venue to be announced.

Memorials will be welcomed in the form of funds to install a bench in Duane’s memory at the Rotary Club’s arboretum. Donations to be made to Lawrence Parks and Rec, the stewards of the arboretum, sent in care of Rumsey-Yost Funeral Home, PO Box 1260, Lawrence, KS 66044.

My condolences. Mr. Evans was a kind and caring person. I had the opportunity to work with him at Haskell on a few projects. Prayers of comfort to the family.

Rafe-
I’m so sorry for your loss. I never met your Dad but if I could speak to him today, I’d tell him “thank you” for serving our country and for raising such an incredible son (you) who has become one of my dearest and closest friends. I know what you’re going through and about to go through so you can call me anytime brotha.

Betsy, Please know Scott and I are thinking of you and hoping you have many family members surrounding you in your time of loss. We are just down the street if you ever need anything. Big hugs and I will see you soon. Bev & Scott McMurray

Beaty, my deepest condolences. As one of his students from Haskell, I cherish the time, knowledge and friendship we shared. I and many will miss him greatly. Prayers to you and his family.

it is with great sadness i learned of mr. evans journey…i have good memories of working with him at haskell for many years…to the family God bless and bring you comfort in this time of loss

Betsy and family
So sorry for your loss. Your good memories will help you get thru this difficult time. The things I remember are Duane’s sense of humor and unique laugh.

Dear Betsy and family,
We send our condolences and prayers to you at this time of your loss. I have fond memories of our trip to China together. Duane was a very special person! Love, Vicki and Tom