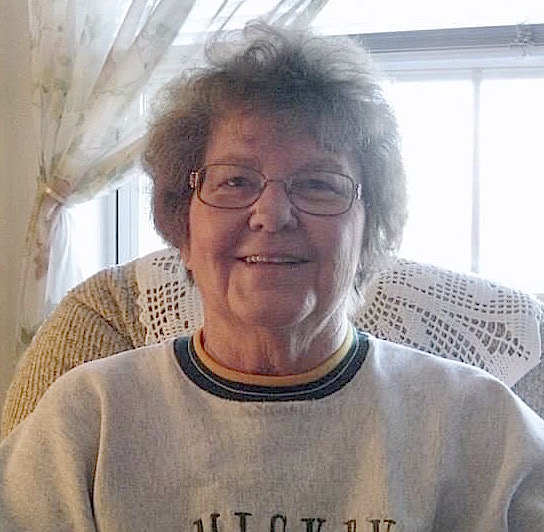 Millie was born October 6, 1934 in Emporia, KS, the daughter of Ruben and Lydia Sill. She attended Emporia schools and graduated from Emporia High School in May 1952.

On December 5, 1952, Millie married Ronald (Ron) Lewis in Emporia, KS. He survives of the home. Millie lived most of her life in Emporia except for the time Ron served in the US Army in Georgia from 1953-1955. They returned to Emporia in 1955 where they lived until May 2004 when they moved to Lawrence.

She was preceded in death by her parents Ruben and Lydia, her brothers Clair Johnson, Lloyd Johnson, Marion Johnson, Alfred Sill, and her sister Ruth (Sill) Jones.

Other survivors include daughter Rhonda Russell (husband Randy) of Lawrence, son Chip Lewis of Cowley, WY, and son Mike Lewis (wife Heidi) of Lawrence, along with six grandchildren, twelve great-grand children, and many nieces and nephews. She dearly loved them all.

Millie attended the Kingdom Hall of Jehovah’s Witnesses in Lawrence.

Cremation is planned. In accordance with Millie’s wishes, no there will be no formal services. Burial will take place at Evergreen cemetery in Emporia KS. The family will receive visitors on Sunday, December 22 from 2:00 p.m. – 3:30 p.m. at the Rumsey-Yost Funeral Home, 601 Indiana Street, Lawrence, KS.

The family suggests memorial donations to the Kingdom Hall of Jehovah’s Witnesses in Lawrence, which may be sent in care of the funeral home.

DearRon, Rhonda, Chip, Mike, and all other family members loved by Millie. I and another friend and spiritual sisters of your mother Millie, wish to send you our deepest regret and sympathy. Both I and Diane and Vicki all loved your mother Millie. I can remember her from many years ago and how caring and sweet she was. I’m sure you her family will miss her very much. May Jehovah Our Father of Tender Mercy comfort give each of you the comfort and the strength needed during this difficult time. I so look forward to the time when we will all meet again. 1 Corinthians 15:12-

Dear Rhonda and family
I will dearly miss my pen-pal, Milly ( and her scribe Spencer). I enjoyed chatting to her and sharing news with her from the other end of the globe. Even though I never met her, I loved her like a spiritual mom.
May the Almighty Father Jehovah give you and your family the strength and support you need in the times of sadness that lie ahead.
We will meet again!!

Rhonda I am so sorry for your loss. Millie will be missed very much. Her smile and laughter will be missed.
I am here for you. Love you friend ❤️ Tina Briggs (Petersen)

Rhonda and family, you have my deepest sympathies. It is so hard to lose a mother, grandmother and friend. She will be missed and remembered.

We would like to express our sincere condolences to you (Mike) and your family. Having lost my Mother a year ago, I know how difficult this is. Our heart goes out to you during this difficult time. Please accept our deepest condolences for your family’s loss. May your memories give you peace and comfort.

Uncle Ron, Rhonda, Chip and Mike I’m so sorry. My love and prayers are with you all.