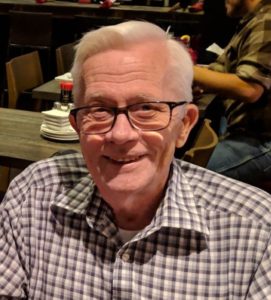 Rees Murray Jackman, DVM, age 79 of Goodyear, AZ died January 30, 2020, in Goodyear, AZ. He was born February 7, 1940, in Kansas City, MO, the youngest child born to Lolita (Russell) and Franklin Clarke Jackman. Rees grew up in Lawrence, KS. He received his bachelors degree in business from the University of Kansas. After years of running the family’s vast agricultural business, Rees returned to school and graduated from Kansas State University with a Doctorate of Veterinary Medicine. He worked as a veterinarian at the Agua Fria Animal Clinic for 28 years and loved every day of work. He loved all animals and worked to provide the best care for them, even paying for treatment if funds were not available. Retirement was difficult, but he was blessed to retain many friendships from his previous clients.

Rees enjoyed good conversation. He was very smart, highly educated and politically active. He enjoyed political discussions but was just as content to talk about nothing. He learned new technology quickly and enjoyed playing electronic games with his sons. Caring and very generous, he tried to help everyone he could. Through his assistance, all of his wife’s family were able to legally come to the United States. Whether it was secretly providing Christmas for a family or arranging for an updated prosthesis for his father-in-law, Rees looked to the needs of others before his own. His children knew that he would provide anything they asked for, so they were careful to be sensible. He was a loving father and grandfather who was so proud of his family!

Private family services will happen at a later date.

Grew up with Reese. Always a good friend. He loved hanging out at my real estate office and with Bob Floyd and Jack Whitehead at The Jayhawk Food Market. We coached South Park League baseball together and served on the “Lawrence” school board together. A good guy. The best to his family. Larry Hatfield