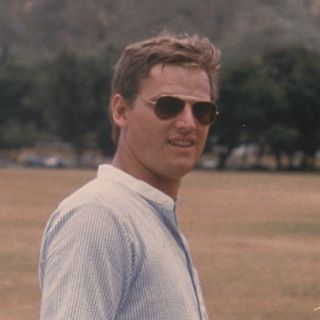 James Randel (Randy) Gebhards died Monday, February 10, 2020 in hospice care at his home in Lawrence, Kansas after several years of pain and struggle with prostate and bone cancer.

Randy was born August 21, 1952 in Tribune, Kansas, the son of Jim and Sheila Dobbs Gebhards. After graduating from Weskan High School in 1970, he attended Fort Hays State University for 2 years, then took some time off to help on the farm, before heading back to school at Kansas State, graduating from there in May, 1977 with a bachelor’s degree in Crop Protection in the school of Agriculture.

On June 4, 1977, Randy married Lou Ann Bruey Gebhards. She survives of the home in Lawrence. Additional survivors include his mother, Sheila, also now in Lawrence; his sisters-in-laws and brothers-in-law (Patty Bruey Tidwell and her husband Mickey of Lakeland, Florida) and Shirley Bruey Sweetman and her husband Jim of Castro Valley, CA; five loving nieces and nephews (Symphony Tidwell, Tina Tidwell Bedore, Amy Sweetman Buller, Robbie Sweetman and Mitchell Sweetman) and one great-niece (Charlotte Rose Bedore). Randy was preceded in death by his father, his brother Rex, grandparents on both sides and many aunts and uncles on both sides.

In June, 1977, Randy joined Lou Ann to serve as a staff member for a Christian student group – Campus Crusade for Christ (CCC and now Cru) on the campus of Iowa State in Ames, Iowa. They were there for 3 years and then moved to Hays, KS to serve at Fort Hays State University, also with CCC. They made many good friends and had several nice summer “postings” to vacation areas – Branson, MO; Lake Tahoe, CA; Ft. Collins, CO; and Oahu, HI.

In fall of 1982, they left their CCC staff positions to move to Lawrence, KS so that Randy could get a second bachelor’s degree in Business from the University of Kansas. After obtaining that, he worked for the State of Kansas, Department of Revenue in tax, audit and budget departments from 1988 until he retired in January, 2015. During the years at KU, he also worked at Alvamar Golf Course – mainly for the free golf, a sport he learned to play in Iowa. He enjoyed watching golf on television as a youngster, even tried to make his own clubs from some scrap iron on the farm. He said they were pretty bad. He had several other “real” clubs after that but was very happy to get his first set of Ping clubs when he graduated from KU in 1988.

Randy had many interests and passions other than golf – fly fishing; watching humming birds, orioles, chickadees, blue birds, cardinals and wrens on the back yard feeder; learning about computers and open source software; airplanes; cars; photography (before we all started using our phones); snorkeling; and even Facebook “discussions”. He had basic skills in electrical and carpentry work from jobs during the time off from college, plus just being a farmer who fixed things.

After retiring he brought his dad to Lawrence to care for him when he needed therapy support after a fall, until his dad passed in July, 2015. He also helped his brother Rex on the family wheat farm for a couple of planting seasons. He felt badly that it seemed whenever he came to help, he brought the opposite weather needed – too much rain or not enough. They persevered together, despite health problems for each. Randy said that between them, they didn’t even make a healthy 50-year old.

Randy had an eye and heart for needs in lives that others might overlook. His sensitivity seemed to increase as his body declined. In his last days he asked often about the health and welfare of family members.

He was a tender–hearted, strong man until the cancer took the strength away. The tender heart remained until his last breath on February 10, 2020.

The family wishes to thank the caring and supportive nurses at Elara Caring Hospice, oncology staff at Sarah Cannon Cancer Center at Menorah in Overland Park, Kansas and the Lawrence Douglas County EMS response teams who helped Randy and Lou Ann a great deal in his final days at home.

Randy was cremated as he wished. Services are scheduled for Sunday, February 16 at 2:00 p.m. at Rumsey Yost Funeral Home in Lawrence. Memorial contributions may be made to the Wallace County Ambulance Service in care of Rumsey-Yost Funeral Home, P.O. Box 1260, Lawrence, KS, 66044.

LouAnn, so sorry to read of Randy’s passing. I sure enjoyed knowing the 2 of you at FHSU with Campus Crusade & when he would take me out Golfing so I could meet my requirements for PE class. My prayers & thoughts are going out to you!

So sorry for your loss. We will miss seeing him. Just wanted you to know that you are in our thoughts & prayers! Sincerely Dennis & Rita Smith

So sorry to hear of Randy’s passing. He was such a great guy! Lou Ann, God Bless.

I have many fond memories of Randy as the sweetheart of my Smurthie big sister Lou Ann at KSU. He impacted the world and all who knew him in a very special way. Thinking of all the family as you grieve. Blessings to you.

I am so sorry to hear of the death of Randy. It was such a joy to serve with the both of you at Iowa State. What a fun brother he was who could bring a lot of joy to people. So thankful I will see him again. LouAnn, you have my deepest sympathies.

I am very sorry for your loss, Lou Ann. I am thinking of you and your family. Sandy michener (your Edgar clan cousin).

Lou Ann, so sorry to hear of your loss. Enjoyed Randy’s company on the commuter van. You are in my thoughts.

From Sidney and Tod Sutton...

Lou Ann, You and family are in my thoughts and prayers. Loved seeing both of you on the golf course. Sending hugs and love, Sidney and Tod

Lou Ann, so sorry to hear the news of your husband’s passing. You are in my thoughts. *hugs*

I will miss Randy and remember our last meal together in Lawrence last summer when he ordered a towering seafood platter!! He relished every bite. Lou Ann, you are in my prayers. I so wish I could attend Randy’s service on Sunday but my recent knee surgery will keep me away. My love to you, Lou Ann and both of your families.

What a privilege to have gotten to know Randy years ago during our college days, especially when he started to date and then marry my college roommate. Love you, Lou Ann, and wish his death just wasn’t so.

So very sorry for the loss of Randy – whenever I saw him he always had a smile and a wave. As a neighbor I will miss seeing him from time to time outside. We are just across the street if you need something Lou Ann. Prayers for you and you family – he now has all the strength to do what he wants. Just think of the trouble him and his brother are going to get into now.

Sorry to hear about this. I have missed you two on the golf course.

So sorry for your loss. My mother enjoyed visiting with him during their lunches together.