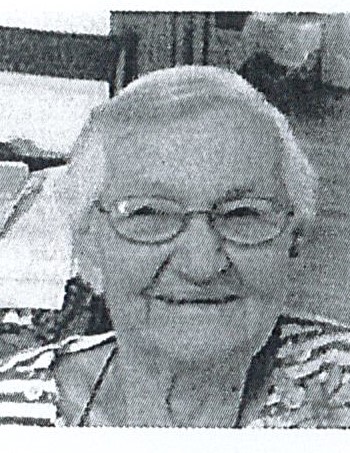 She was born Dec. 19, 1926, in Prairie City, Kan., the daughter of Ernest and Vilo Hemming Butell. She graduated from Baldwin High School and later from Baker University. She was a homemaker and a farm wife. She taught school in Williamsburg for two years, and later co-owned and operated the Worden Store with her husband. Wincel was a church pianist for many years and enjoyed quilting. She was a member of Worden United Methodist Church and of the Lloyd Beaton American Legion Post 228 Auxiliary in Baldwin City.

Friends may call from noon to 8 pm Friday at Rumsey-Yost Funeral Home, where the family will receive them from 6 to 8 pm. In lieu of flowers, memorial contributions are suggested to Neighbor Helping Neighbor, an outreach of Lighthouse Baptist Church of Baldwin City, in care of the funeral home, 601 Indiana St., Lawrence, KS, 66044. Online condolences may be sent at rumsey-yost.com

Harold and Wincel were always interested in knowing family and remembering who we were in the family line. I went to a few of the Schwarz reunions during my visits to Kansas and they were such sweet people. Marsue Neis Frame

I remember wonderful visits with the Jehle’s when Mom and Dad came back to Kansas. Such laughter and stories!! I am so glad we got to see Wincel in December. She remembered us all. I know you will miss her so much as you do your Dad. Such a generation of great people. Love to all the families.

My condolences to the family. As pastor at St. John’s Church, we Christmas caroled at Harold and Wincel’s home for years. Wincel made delightful foods for us. I helped officiate at Harold service and due to surgery, I can’t be at Wincel’s. Yet my spirit and prayers are with the family.

I’m so sorry to hear this. My thoughts and prayers are with all the family.

I am so sorry to hear of Wincel’s passing. Hugs & prayers to the family from me. God bless.

Wincel and Harold will be sorely missed at our barbed wire shows. We traveled together to a few shows and always had a great time. Our condolences to their family.

She was such a gracious lady. She and Harold were always interesting to visit with. Wonderful people. I miss him and will miss her. Condolences to her family.

When I was at Marion Springs, Wincel was a substitute. Since I knew her from church, I was always relieved when she subbed. I knew she’d keep it under control!