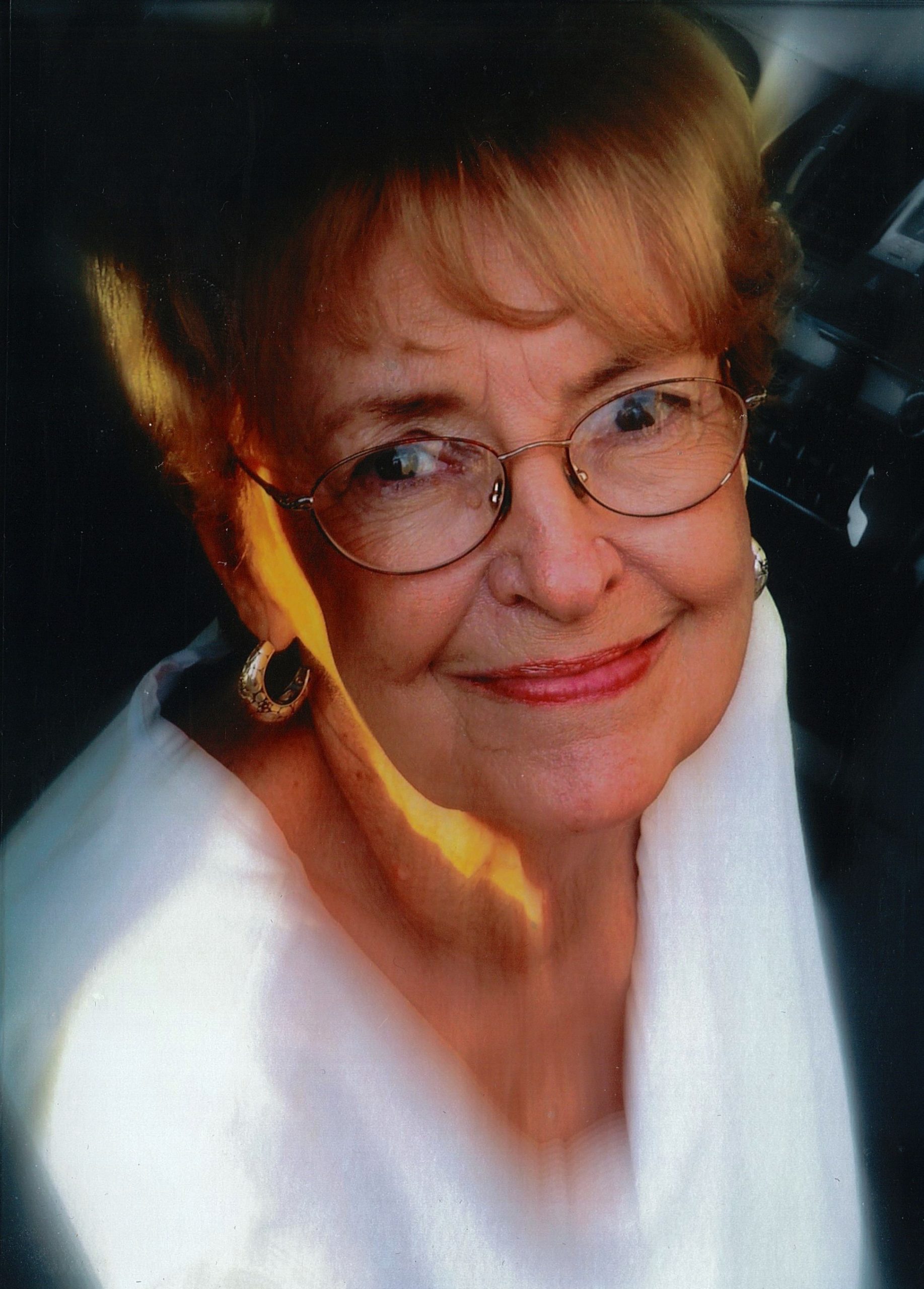 Jeanine E. Lienhard passed away on Saturday, June 27, at home surrounded by her family. She was 85 years old. She is preceded in death by her son Eric Lienhard and grandchildren Kelsey Kivisto and Kyle Scott. She is survived by her husband Bill of the home and daughters Julie Kivisto, KC MO; Betsy Scott (Bruce), Hurricane, UT; Amy Lienhard (Jack Smithback) Niedermohr, Germany. She is also survived by her grandchildren Blake & Lissa Kivisto, Jessica (Tim) Joyce, Ryan & Cody Scott, Sebastian & Chelsea Smithback and great-grandchildren Landon and Piper Joyce.

She Married Bill Lienhard on August 27, 1955 at the Blessed Sacrament Catholic Church in Wichita. Bill and Jeanine would have celebrated their 65th wedding anniversary in August of 2020. They lived in Wichita for 10 years before moving to Lawrence, KS in 1965 where Bill went to work for US Bank. They raised 4 children in Lawrence, Julie Kivisto, Betsy Scott, Eric Lienhard and Amy Lienhard.

Jeanine and Bill enjoyed traveling, spending much of the time in Europe visiting her daughter Amy and her family.

Jeanine was involved with the community as well as helping with the start of Corpus Christi Parish. She spent many hours volunteering her time in the office and various duties. She was also involved in various committees at Lawrence Country Club, PEO and loved to play bridge. She also played tennis and golf, even winning the Women’s 9-hole championship at LCC.

All 4 children were active in a variety of sports which required Jeanine to chauffeur her children all over the state. Her day would often start at 5:00 am transporting kids to swim practice, or another group of kids to tennis tournaments. As the children got older, she spent many hours on bleachers watching them all play sports at Lawrence High. Jeanine also had an entrepreneur side, as she and a couple of friends had a needle point shop on 23rd street for 5 years. Jeanine loved her grandchildren and spent many years attending their activities and traveling to Germany to spend time with her daughter, son-in-law and grandchildren there.

Jeanine was a loving and devoted advocate for her son Eric after a car accident resulted in a severe brain injury requiring 24 hour full service care. She was frequently seen at the nursing homes where he lived decorating his room or taking him out for walks. She also took good care of his caregivers with wonderful handwritten notes, baked goods and small thoughtful gifts of thanks.

Jeanine and Bill lived in Lawrence for over 55 years and enjoyed being a consummate hostess, she provided many gourmet meals for her loving friends and family. Many of their wonderful friendships have lasted over 50 years.

We also want to give a special thank you to Lana Neir with Visiting Nurses for her early care giving and Beth Robbins who was Jeanine’s devoted caregiver allowing her to remain in the home until her passing.

A mass and funeral will be held at 10 am, at Corpus Christi Parish on Thursday, July 2nd, Please arrive before 9:40, Covid related documentation will need to be completed. After the service she will then be laid to rest at Memorial Park Cemetery where her son Eric and grandchildren Kyle and Kelsey are buried.

In lieu of flowers, the family would encourage donations to the Visiting Nurses Association and Corpus Christi Parish, sent in care of Rumsey-Yost Funeral Home, 601 Indiana Street Lawrence, KS 66044.

My thoughts and prayers are with you and your family.

My sincere condolences for your loss. What a neat lady! I hope your hearts are filled with wonderful memories.

From curt georgeson and family...

To the Lienhard family, my deepest sympathy to your Family for the passing of the Queen of the family. Many memories of both our families,growing up in the early days of our Dads in the offices of 1st. National Bank Days. I remember the weekend I got to be included in a camping and boating weekend with your family back in the 70’s, Great Memories, Peace be with you all!!!!

Bill and Lienhard family, my heart goes out to you with thoughts and prayers. I will always have fond memories of Jeanine as a loving and gracious person. May God’s love and blessings be with all of you.

To Bill and family;
We wanted to let you know we were thinking about you. Jeanine was such a gracious, welcoming person who would always greet us with such a wonderful smile. She will now be shining her light from above!! You are in our prayers.
Ray – Pam Bechard

When we moved to Lawrence and I was Eric’s high school basketball coach, Judy & I were blessed to be surrounded by great families. The Lienhard family was one of those. Bill & Jeanine continued to be a constant in our lives. I will always remember Jeanine for her wonderful smile and positive attitude. When I left her presence, I always felt the need to give someone a hug or some love because Jeanine’s love was so contagious. I am sure many will share this feeling. Bill, Julie, Betsy and Amy, the Juneau family wants to give you the love your wife and mother gave to us and so many others. Judy & I are comforted that Jeanine is in a better place, surrounded by those in your family that proceeded her.

To Bill and family,
We are so sorry to hear of Jeanine’s passing and are thinking of you all. It was a privilege to know her. Our hearts are with you all.

Dear Lienhard Family,
We are so sorry for your loss of Jeanine. She was a wonderful woman and we know she will be sorely missed. Our hearts and prayers are with you during these difficult times. May the Lord grant you peace. Beth & R.C. Buford

From Tom and Grace Carmody...

Bill and family: so very sorry for your loss.

Jeanine was such a wonderfully warm, open-hearted, and caring woman. In everything she did, there were small grace notes, thoughtful bits that no one else would have imagined. It was always a pleasure to be with her, sitting in the back seat of Bill’s car on the way to games, sitting in the bleachers at games, getting together to plan celebrations (no one was better at this than she). My sympathies to all the family on your loss.

When Eric was at Brandon Woods I was constantly touched by Jeanine’s unfailing love and care for him. I also received more than one fudge cake from her. She was gracious and kind. My heartfelt sympathies to all of you. Paula Hatcher, RN

Lissa and Linehard family –
Molly and I are sorry to learn of your loss. Sending love and prayers you way. We know your grandmothers life was one worthy of celebration and gratitude.

From Chuck and Karen Warner...

To Bill and his family:
Our thoughts are with you at this time of great loss. Jeanine was a special person, gracious and sincere. Be strong and stay well.
Chuck and Karen Warner

So sorry to hear of your loss. She was a wonderful woman. Thoughts and prayers from the Willoughby’s

From The McCarthy Family...

Our thoughts and prayers are with your family.

Her progeny is her legacy of a well done life. She was such a beautiful, uplifting soul and my heart is with Bill, Julie, Betsy, Amy and all extended family and friends. I am sorry. I am also humbly grateful for the privilege of having experienced Jeanine and her family during the decades of life in Lawrence. <3

My thoughts and sympathy are with you during this sad time.

My dearest Scotts family and grandpa Bill! I don’t have the words to describe my many great memories of grandma Jeanine! I love her and missing her already! Please accept my deepest condolences. May grandma Jeanine’s many precious memories ease the sorrow that you feel and bring you comfort that she’s now a beautiful God’s Angel watching over you all! I love you all!
Ms. Christie

My thoughts and prayers are with you and your family. Cherish all the wonderful memories. May GOD Bless you and comfort you during this time of sadness.

Dear Bill and Lienhard Family, I am so sorry to hear about your wife, mother, and grandmother. May the peace of the Lord be with your family through this difficult time. Wishing we could be there to attend the funeral mass, but with all the restrictions on Covid-19 we will not be able to attend. Jeanine was a wonderful soul and know Bill will dearly miss her. Blessings and safe travels to your family as you celebrate the life of Jeanine.

Jeanine was a wonderful person—always with a smile, always with questions about “how I was”, always surrounded by family who loved her dearly. My sympathies to Bill and his wonderful family

Oh my sweet Lienhard families, my heart goes out to you. Ted and I loved our sweet Jeanine and have so many fond memories of her. She was such a sweet, sweet lady with such a kind and welcoming heart! Rest In Peace darling lady. Hugs to all of you!

Dear Julie, I am so sorry to hear of your loss. Your mother was such a sweet soul. I have many fond memories especially when working with her at Scott’s Ltd. my heart goes out to you, your father (Bill), Betsy, Amy and the rest of family. You are in my thoughts, sending prayers.

I am so sorry for your loss. What a wonderful woman she was and I know she’ll be in your hearts and thoughts ALWAYS.

Julie I am so sorry to hear that your has passed away. I am sending you and your family loving thoughts and prayers

Dear Mr. Lienhard and family, on behalf of the Bong family (sons of Bob & Sylvia Bong), our sincere condolence and sympathies to you and your family. We have fond memories of the Lienhard and the friendship that grew while we lived in Lawrence and even after. May God bless you in abundance during time of sorrow and may He comfort and heal your pain and sadness, and may all of you find comfort with all the fond memories of Mrs. Lienhard. James (Dallas), John (Houston), Jerry (Chicago).

Dearest Mr. Lienhard, Julie, Betsy, Amy and your beautiful families…With a heart filled with many warm memories and love for Jeanine ( as she has been asking us to call her ) and all of you; sending my deepest sympathy and wishing so much I could be there. With love, Lauri Zinn O’Connor