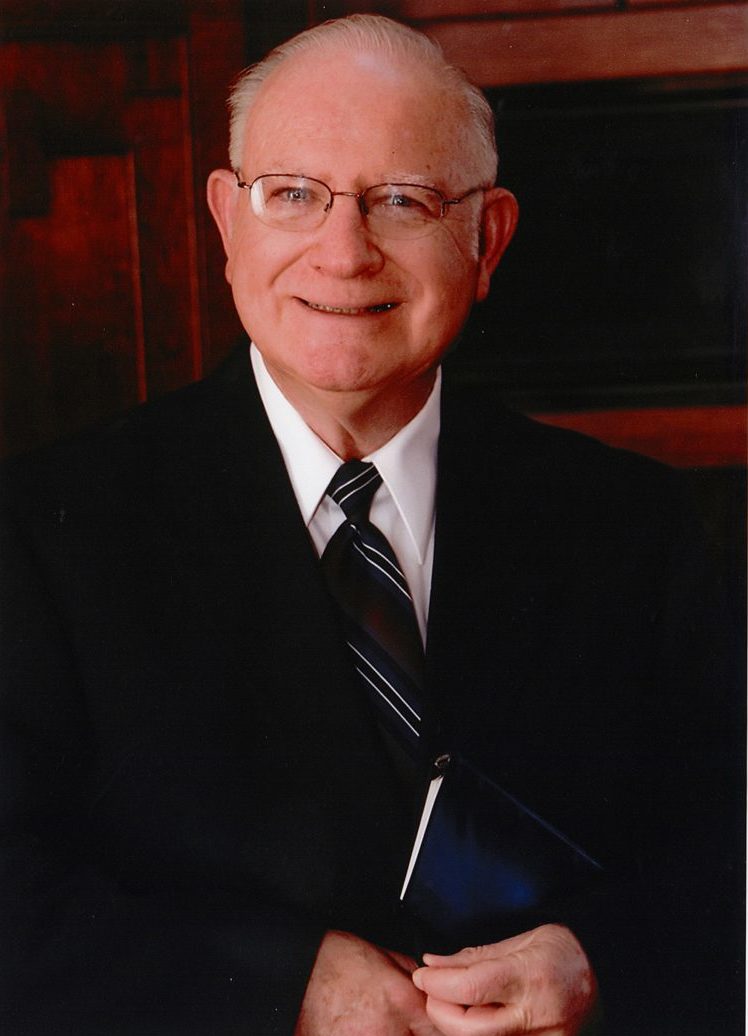 He was born October 26, 1939 in Cairo, Kansas, the son of Frank “Ervin” and Christina Elizabeth Wilbanks Ogden. He spent the first three years of schooling in a one room school house in Cairo, KS. The rest of his schooling took place in Preston, Kansas. He graduated from Preston High School in 1954.

Don married Dolores Jean Sparks on December 27, 1959, at the Church of God in Pratt, KS. She survives of the home.

He accepted Jesus Christ at the Church of God in Pratt, KS. October 1958. His commitment to ministry began at that time and has never wavered. Don has worked in all aspects of ministry: janitor, youth leader, board member, Sunday school teacher, Sunday school superintendent, and Lay Minister (Preached his first sermon at the old Church of God on New Hampshire St.) He also preached the first sermon at Indian Hills Church of God. Don was ordained by International Ministers Forum in April 6, 1987, ministering in the Garnett Area and Louisburg KS., Word of Life Church. He helped start Bethel Fellowship in Cleveland, Mo for 22½ years.

Fulfilling a 45 year old desire to work at a funeral home, he helped with services at Rumsey-Yost Funeral Home until the fall of 2019.

Ministering to Don was not just within the walls of the church. He has shared his home with countless persons who needed a place to live. Sunday dinners were provided for a group of KU students after Church. Lots of food was enjoyed. Still in contact with several after 50 years. Don was privileged to perform several weddings and funerals for some Journal World employees. He was on assignment to his fellow dialysis patients and staff, giving them an encouraging word and praying for them. As one of his doctors said, “Don you are living your faith.”

Don attended regularly and preached on occasion at Victory Bible Church until his health made him unable to do so.

Always a smiling face. I am not exactly sure how I met this nice man, l think it was thru the chiropractor I worked for. But, at any rate he was always so very nice and pleasant. My condolences go out to the entire family.

Don was always such a generous , happy guy. A great co-worker at the Journal World. He had such a skip in his step, walking to work most days. Even helped me hang a hammock once. I always enjoyed talking with him. Loved his laugh!!!

I met Don and Jean many years ago when we started meeting on Thursday’s for dinner with other friends. I was one of Don’s “Dandies” as were the other ladies in the group. We had lots of laughs together and many great conversations. Don was a very caring and sincere Christian man. My heartfelt condolences to you Jean and the rest of the Ogden family. May God bless all of you.
Gwen Leonard

I remember Don’s laugh & smile that was always so kind. Don & Jean have always worked as a team to be a blessing to so many. I will say thank you for the many encarserated whose lives they touched with their generosity. They sent Bible study books to the men & supported & prayed for ministry into max unit. They sent cakes & soft drinks so the men could have a nice celebration to reflect & enjoy on Christmas each year. They touched the lost & found alike. I know Pastor Don will have the opportunity to speak with some of the gentlemen that went home before Don. I’m sure he will get to meet those that are yet to come home as well. Don will be missed & remembered well by many. I’m sure Don will be doing some dancing in heaven. Bless you Jean. Healing to the hearts of all of your family in Jesus Wonderful name. Amen

To the family of Donald F. Ogden:
Galatians 6:22,23 But the fruit of the Spirit is love, joy, peace, long-suffering, gentleness, goodness, faith, Meekness, temperance: against such there is no law.
To know brother Ogden he portrayed all of the fruits of the Spirit. He was a very nice, kind and gentle man. Always full of the Spirit of God and always had good things to say about people with a smile on his face. I will miss him and all of the kind words and sermons he shared. I know that he is with the Lord dancing around God’s throne. It was a blessing to know him. May God continue to bless you and your family.
Love Sister Patricia Patterson and family.

So sorry to hear of your loss of a loved one, our condolences & prayers to the Ogden family at this moment.

Our deepest sympathies to the family! Pastor Don married my husband and I 26 years ago.

Don was my Sunday School teacher during my junior high & high school years. He often had a class of one, so I especially appreciate his willingness to share his love of Jesus with me. He & Jean made it possible for me to experience a “youth group” by hosting a Bible study during my high school years. As an adult, I would continue to hear of their encouraging work with many, and visited with them way too rarely, but the love never stopped. My greatest sorrow comes from not letting Don (and Jeannie, you, too) know how much their love for Jesus and people meant to me.
Don is home with Jesus, and for that, we can rejoice. For those of us left behind, God will provide comfort, realizing that we are one day closer on our journey home.

My heartfelt condolences for Jean and his family. I met Don & Jean when I was in high school and have fond memories of those bible study meetings. They were so kind and loving towards us that I’m not surprised that his commitment to ministry lasted his whole life. The last time I saw him he kindly conducted services for my mother’s funeral even though I hadn’t been in Lawrence for over a decade.

I was blessed by Jesus the minute Pastor Ogden walked through the doors of Victory Bible Church. He was an amazing power for the witness of Jesus on this earth. I know that Jesus must be thrilled to have him back.

I worked with Don at the Journal-World. He was such a kind and very gentle man; so soft-spoken and sincere. This world needs more men like Don and his passing is a big loss.

Hello Delores: It is with sadness about the passing of Don this week. I knew Don when he worked at JW and he did set a good model as a a believer of Christ. for those of his family and those that know him he will be missed.
God bless you and your family and that he comfort you all.

I always called Don our “Good Will Ambassador”. Everyday he would make his rounds either coming to or leaving dialysis. He would stopped by and check on every patient and offer them encouragement and see if he could help them in anyway. He not only watched over our patients, but also our staff. He would offer prayers and a smile. Even on the most hectic days he would bring calmness to all around him. It was never about him, as I knew in many occasions he did not feel well, it was always about helping others. Don and Jean were apart of our family. He loved his family. Jean was the light of his life. He is missed. Our little clinic is not quite the same anymore- but I know he is watching over us. Bless you all during these difficult times.

so sorry for your loss. i worked with don at the journal world. he was such a kind man and had a good sense of humor.

Don, my whole family loved you like another grandpa. Thank you for marrying my parents and my sister to her husband. You were always around growing up and I know my mom loves you so incredibly much. Thank you.

Don, you were a blessing to my family and I. You saved my heart when I lost my mom and helped my sweet kids understand death. It was with great pleasure that I got to be apart of your health care team for so many years. Your smile never wavered, even if you weren’t feeling your best. Your love for your family and friends (especially for your beautiful wife Jean) was never in question. I love you my friend. ~ Lucinda

Dear Jean and family: I met Don on June 11, 1963, when I started my career at the Lawrence Daily Journal-World, and enjoyed being a small part of your extended family over the 50 years of my law practice.

Don practiced his faith and what a shining example he was.

My thoughts are with the family at this time of profound loss.

I can’t begin to count all the many ways Don and Jean have been a blessing to me and my family. I’m sure there are many people who can share this sentiment. Our family was blessed beyond measure the day that Don walked into my life when I began work at the Journal World in my early 20s.

“This is the day the Lord has made, I will rejoice and be glad in it.” That is how Don brought the Lord with him wherever he went, and how he shared the Lord with everyone he came into contact with. I thank God that He caused our lives to intersect and that I was chosen to receive the love of God poured out upon me through my life-long friendship with this beautiful kind man.

Through the years Don became a father to me, a grandfather to my children, and a friend to my husband. Don poured out unconditional love as any good father does. By his example and teaching, Don helped me to know and understand that I was loved my heavenly father too. I’m sure that many years of prayers were said on my behalf which God used to change my heart and the circumstances in my life.

Don, I will remember you always, and look forward to the day when I see you again in heaven. I’m sure you have already heard the words of your Father, “Well done my good and faithful servant. Enter into the joy and rest I have prepared for you. Welcome to your eternal home.”

I pray blessings and peace to the entire Ogden family. Thanks for sharing your husband, dad, granddad with all of us. We share in your grief of no longer being able to see or talk to him in person. But rest assured that because of his prayers and faithfulness, we will all see him again one day. May the Lord bless you and keep you until then.

From Rob and Debra Cheshier...

We didn’t see Don and Jeannie often, but always loved our visits with them. Don was such a sweet, dear man whose kindness was so noticeable and noteworthy. He was always interested in those around him and such a fun person to share a meal with. We send our love to Jeannie and our sincere sympathies to the entire Ogden family.

I enjoyed seeing Don at cardiac rehab many times over the years. He was such a sweet, and kind, dignified man. He will be greatly missed. My condolences to his family.
Sincerely,
Rita McGrew, RN