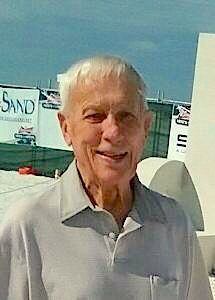 Mr. Zimmerman was born Nov. 30, 1925, and raised in Eudora. During World War II, he served as a Merchant Marine. After returning to Lawrence, he married Kathy Broers. They later divorced.

Mr. Zimmerman was the longtime owner and operator of Zimmerman Steel in Lawrence.

I was so sad to hear about Lee passing away. I was fortunate to have worked at Zimmerman Steel back in the 70s and both Lee and Kathy welcomed me into their business and their family. I will always remember Lee as a dedicated family man, a good business man and a great community leader. And I even forgave him for scaring me when he took me flying. Kim Lee and Nancy my thoughts and prayers are with you both.

Nancy so sorry to hear about the passing of your father.
Cynthia Peters Sullivan

Lee, my condolences to you and your family. I have such fond memories of our childhood days, and your dad. Sending love and prayers for you all.

I am so sorry to hear of Lee’s passing. He was a long time patient in cardiac rehab where I was nurse. He was always wearing a smile when he came in, or whenever I’d see him around town with my husband John, who also knew him quite well. He was such a nice man!! We will really miss him. Sincerely,
John and Rita McGrew, RN

I worked at Zimmerman Steel from 1974 to 1994, and during that time learned a great deal from “H,” as we often called him, about how to organize and run a shop and a business. He was the last of the half dozen working there when I first walked in the door. This definitely marks the end of an era. Lee, Nancy, my sincere condolences.

We thank everyone for their kind words. We feel blessed that our father had a long, healthy life and will now go home.

I’m so sorry to hear of Lee’s passing. He was so kind and full of life. He came to our dads funeral, the last of the “Terrible Five”.
They are all together once again.

Kim Lee and Nancy, Worked for your dad and mom back in the 70’s. They were both very good and nice people. They both came to my wedding. Sorry to here of his passing. My God be with you at this difficult time.

Nancy, I’m sorry to hear this, your dad was always very funny and nice. You have my sympathy, it’s hard to lose your parent at any age, the person that loved you unconditionally.

I knew Lee though business activities in Lawrence. He was a funny and clever guy and great to be around. Sorry to learn that he has passed away.

Lee was a special guy and we will miss him here in Cardiac Rehab. He would always give the biggest hugs. He was here last week and had the best time since not seeing us all with the COVID restrictions. A true friend and will be missed by us all.

A very sad day; Lawrence and the surrounding areas have lost a legend, a historian, and a friend. I met Lee Zimmerman several years ago when I started going to Cardiac Rehab at LMH. We quickly became friends. Through normal conversation with him, I learned more about the city than I ever would by other means. I learned about the Merchant Marines and their role in WW2. I was amazed at the different ports-of-call he had visited.
Sadly, I have lost a friend who will truly be missed.

My sincere heartfelt prayers go to Lee’s family. God had blessed him with a long life, and has welcomed him home.

Our thoughts and prayers are with family and friends. I met Lee in 2005 at Cardiac Rehab. He was a joy to talk with, anything I wanted to know about the Lawrence area Lee knew all about it. It got to the point that if Lee didn’t show up at rehab, it was, where’s Lee? I feel blessed for the few years I could call Lee friend. We’ll truly miss him. Veterans Day coffee and breakfast at Hy-Vee without Lee won’t be the same. Thanks Lee, God Bless you. RIP.

Dear family, I am so very sorry to hear Lee has passed away. I just spoke with him a week or so ago and as always he was very happy and such a positive person. I will miss our conversations. He was a very nice person. Wishing your hearts peace at this difficult time. He will be missed!

I am so sorry to see this news. I worked with “the Lee’s” at the steel company for several years and will always remember H. Lee and his family very fondly. I was also fortunate to meet most of the “Terrible Five” and I always enjoyed hearing their stories. Sending prayers and sympathy to K. Lee, Nancy, and the rest of the family.

So sorry to learn of Lee’s passing. As the last of the “Terrible Five” he was at my dad’s funeral in February. My condolences and sympathy.

Sorry to see the last of ‘The Terrible Five’ (Dick Hawes, brother Bob Zimmerman, Lee Barrand, Lee & John Steger) pass on. A brotherhood that they all enjoyed for years.

Dearest Nancy and Kim Lee: Your dad will be sincerely missed by our family. Your dad’s subtle humor was always loved by all of us out here in Washington. His stories and the memories he and my parents shared of travels and experiences together will be on our hard-drives until the end of days. We love you and miss you. Our small family is one smaller now. Sadly. All my love and mind, Annie.

I am so sorry, Nancy. Your Dad was quite a guy.
I’m glad to have known him. You have my love and sympathy. Elaine

My beloved friend Nancy, daughter of “Mr. Z”, has been a blessed part of my life and my (departed) sister’s life, for over 50 years. Mr and Mrs Z warmly welcomed me throughout high school shenanigans, graduations, trips, KU life, a wedding, and many precious moments. Mr. Z was kind, funny, wise, and caring. My heart hurts for Nancy and her brother Lee. God bless you both in your time of grief. With love, Retha