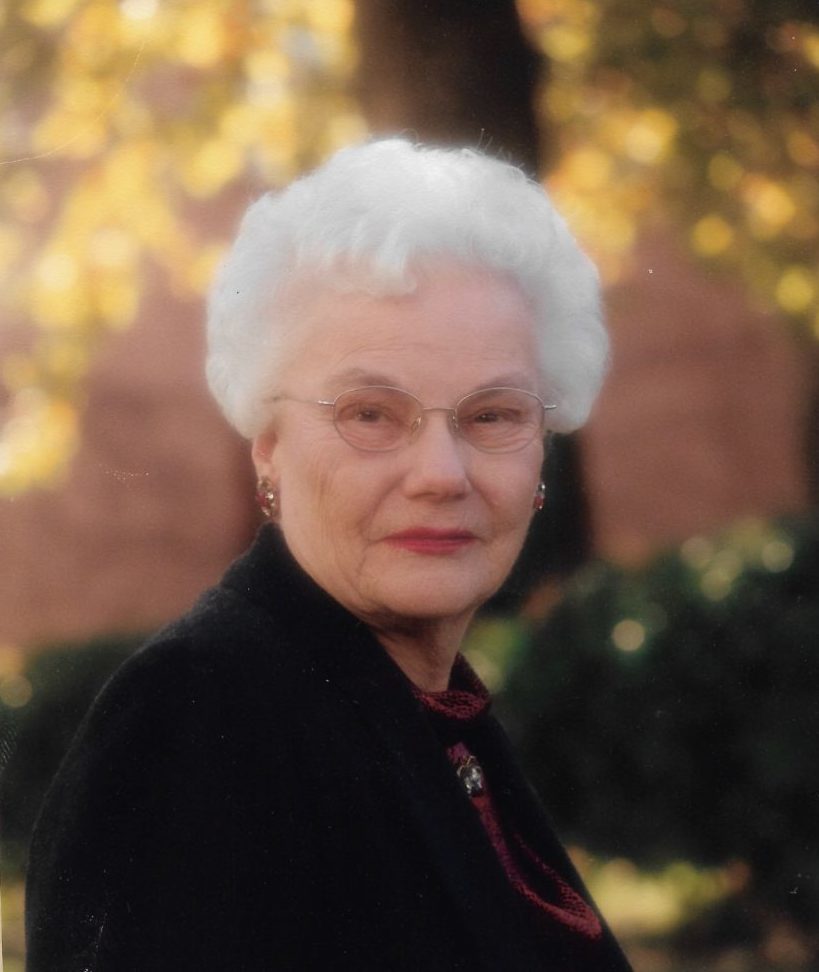 Jeanette Rector Schoen died peacefully of natural causes on July 13, 2020. The daughter of Frank and Evelyn John of Ft. Worth, TX, was born March 6, 1926. Because Jeanette was a transplanted Texan, she always reminded us that she was born on the anniversary of the day the Alamo fell, but was not responsible. Though she had lived in Lawrence and Leavenworth since 1964, she never lost her love of her home state or for yellow roses.

Jeanette attended Texas Christian University, graduating in three years at age nineteen and being listed in Who’s Who in American Colleges and Universities. After Bill’s death she received her Master’s degree from the University of Kansas. She taught learning disabilities in Leavenworth and other area schools until her retirement.

She was known for her humor and was always a teacher. When the girls were little, she slayed a water moccasin and opened it to show everyone why the snake was so fat. One time, a grandchild complained that it was hard going to visit “Grandma JJ” because she always made you think.

Jeanette enjoyed bridge and book club with her many friends in Lawrence and Leavenworth. She loved travel and held membership in many organizations. Jeanette was never without a book. The family learned that, if she said, “I have a few pages left”, she was finishing a chapter. However, if the message was, “I have some more to read,” it meant the kids should cook dinner because she wanted to finish the book. She was an avid reader until the day she died.

Though there were ‘only’ six children, others were held close as what she called ‘outlaw’ relatives. While many, the closest include Cindy Mullican, Rob Rector, David Muir, Jr., and the Miller Boys – Rob, Keith, and Gary.

A celebration of life will be held at a later date. In the meantime, you may remember Jeanette by donating to the American Association of University Women, Friends of Leavenworth Library, the Leavenworth Hospice, or the charity of your choice, sent in care of Rumsey-Yost Funeral Home, P.O. Box 1260, Lawrence, Kansas 66044.

Jeanette’s last home was at Neuvant House, and the family thanks everyone there who took such good care of her.

Remember Jeanette with love and fondness.

We will always remember the sparkle in Jeanette’s eye and her kind ways. She was a remarkable woman who knew her own mind and spoke it. She was also a very devoted teacher, mother and friend who shared her passion of learning and reading with many.
Our deepest sympathy.

Jeanette was my teaching colleague at Basehor High School and a member of my teacher organization, Alpha Delta Kappa. In fact she was our Beta Epsilon Chapter president from 1986 to 1988. She was beautiful, efficient, kind and fun. Fond memories of this fine lady. My sympathy to her family.

I considered this wonderful woman as a friend, a role model. The Rectors have been my brothers and my life since day one. I loved this lady and her family so much.

We were at peace from the moment we met and accepted me into her family like one of her own. Rest in peace Jeanette~♡