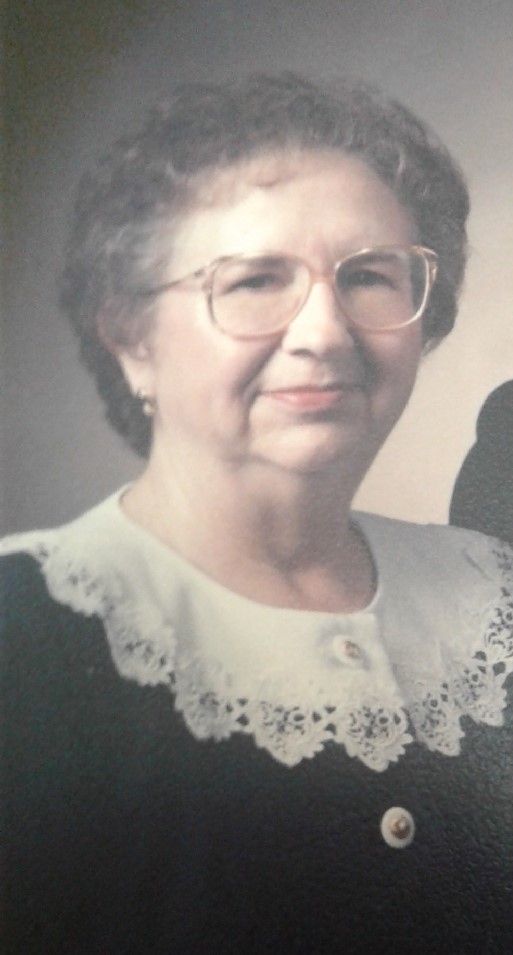 Graveside services for Thelma Mae Dietz, 96, will be at 10am Friday August 14, 2020 at Memorial Park Cemetery.

She was born March 8, 1924 in Lawrencce, Ks, the daughter of Merritt and Gertrude Hadl Wooddward. She graduated from Liberty Memorial High School.

She was also preceded in death by her parents and sister Betty Woodward Russell and son-in-law William Wilson.

Survivors include a daughter, Carolyn Wilson, Lawrence and a son Ron Dietz and wife Annette also of Lawrence.

Thelma and Linas enjoyed camping and playing cards with their close friends. She enjoyed painting and became quite an accomplished painter watching Bob Ross. Thelma and Linas had a booth at the Maple Leaf Festival for many years selling their crafts. Thelma painted many beautiful Christmas tree ornaments, especially her angels.

She was raised on a farm southwest of Lawrence. After marriage she and Linas lived on a farm just east of the Clinton Lake Dam. Their farm was flooded in 1951 at which time they moved to Lawrence.

Thelma worked at the Kansas Colorpress and at the First National Bank for many years retiring in 1987.

Thelma was a loving wife, mother, grandmother and auntie. She will be sorely missed.

Memorials may be made to Medicalodges of Eudora sent in care of the funeral home.

Ron and Family: I was saddened to read of your mother’s recent passing. Praying that the Lord will give you peace and good memories of your mom in the days and years ahead. Please accept my deepest sympathy.

From Marvin and Kathy Pine...

Have known Thelma since childhood. Always a very nice lady. Will miss seeing her smile and warm welcome whenever we met. Our sympathy to her family!

To Kim & Family: I was so sorry to hear of your grandmother’s passing. Please accept my most heartfelt condolences on your loss. May loving memories bring you comfort and peace.

Ron & Annette: Sending our deepest sympathies at the loss of your Mother.

Sympathy and prayers to the family. I worked with Thelma at First National Bank many years ago. Thelma was a joy to be around and always had a smile for everyone. God bless you all.

My Deepest Sympathy to Thelma’s Family.

My condolences to Ron, Carolyn and families. I worked with Thelma at First National Bank for 30+ years. I considered her my second mom. Loved her dearly!

I hadn’t seen Thelma in years. She went out of her way to take me to CJHS during the semester that I had a broken leg and needed a ride. Her good kids are a tribute to the kind of mother she was.

I had the pleasure of working with Thelma at the First National Bank from 1982-1984. I worked in the vault and she was always at her desk handling the safe-deposit boxes. She had a wonderful way with customers that regularly came in. The one phrase I remember from her about her typing is that she has “nimble fingers.” She was a true pleasure to work with. My condolences to the family.

To the Family, may she rest in peace…Mike Hadl…

Ron and Annette, I am so sorry to hear about the loss of Ron’s mother. My thoughts and prayers are with you during this time.

She was my Godmother. She enjoyed life so much. As a child I loved sitting on her lap. Her and Linas would visit my folks and as an adult I would walk in and sit on her lap, I can still hear her laugh. She will be missed my many people that loved her.

Sorry about cousin Thelma death
I always loved visiting with her when I was a young girl. Whenever she visited my grandma Martina Hess they always had great visits. I am Janet and Charles Mills daughter Debbie. Thelma was a grand lady. Again she will be greatly missed