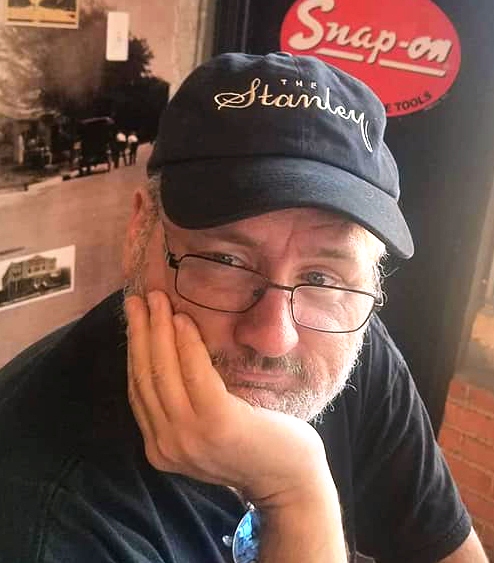 The location for this service has changed. It will now be held at Rumsey-Yost Funeral Home.

Layne B. Moore went home to his heavenly Father on December 23 at 1:30 PM after a long, hard fought battle with End Stage Renal Failure.

On January 8, 1968 the world was made a better place by Layne’s birth. He was born to Wayne and Shirley (Buechner) Moore in Arkansas City, KS. If he could talk, he would have made a snarky comment about Elvis’ birthday. Layne graduated from Arkansas City High School in 1986 then introduced his wit and humor to Cowley College.

Layne continued his reign at Gilliland Printing, subjecting his co-workers to many pranks and much laughter.

Along with his snarky humor, bright personality, Layne was blessed with many musical talents. He had fond memories of his time in musical ensembles including The Paper Plates and Cousin Ernie. Layne has produced many singles which can be found on Reverbnation.com.

Layne also channeled his talents into writing. He is the author of The Scaries series, www.thescaries.net www.mancavebooks.com and was in the process of writing more books.

Layne’s first marriage produced 3 amazing, loving, talented children Samuel, Katherine and Mary Grace. Layne met his current wife and soulmate in 1985 while working at Leon’s Drive In in Arkansas City, although at that time neither knew what the future held for them. After his divorce, they reconnected and he married R. Marie Frazee on April 2, 2011.

Layne loved his friends and family fiercely and challenged others to do the same. He loved life and filled it with humor, music, his musings though writing and his faith. Please join in celebrating Layne. Services for Layne Moore will be held at Rumsey-Yost Funeral Home, Lawrence KS on Tuesday December 29, 2020 at 1:00 PM. A memorial will be held in Arkansas City at a date to be announced.

The family requests contributions made to either 360 Church or Save a Life, sent in care of Rumsey-Yost Funeral Home, P.O. Box 1260, Lawrence, KS 66044.

Layne struggled with health issue related to kidney failure. The most meaningful gift for the family would be organ donation in honor of Layne. Questions about becoming a living donor contact Save a Life Inc. at www.savealifeks.org

Online condolences may be sent at www.rumsey-yost.com

It was a pleasure to have met and known Layne while taking care of him. His jokes and humor were always welcomed. My thoughts and prayers are with the family and friends

Marie, Samuel, Katherine, Mary Grace and Moore family, Layne was a terrific person. He was a great guy to be around. I knew him from high school and we became friends working at Gilliland Printing. Cherish the memories and the good times. Prayers to all of his family.

I did not personally know Blayne but enjoyed his ministry in music at 360. He was a tremendous asset to the church and will be missed. Illness is a robber of live but we know the One that is the giver of live, for eternity. You will be reunited once again. God bless you.

I am so sorry for your tremendous loss. Please know that you are all in my thoughts and prayers.

Bro Wayne was a blessing to all of us at 360 church. We are thankful for the time and gifts he shared with us. May God continuously comfort his family, please accept my condolences.

To Layne’s whole family,
My most heartfelt condolences on your loss. Layne left the world a better place for having known him. Those of us who knew him are better for having known him. We grieve with you at this time and rest in the assurance that he is with his Heavenly Father.
He will be remembered with a big smile. I know all of us have at least one funny story when we think of Layne. That’s what he did. He made us smile. And even though he’s not here any more, he will always make us smile.
My prayers are with you all. I’m so sorry for your loss.

My heartfelt condolences.
No words can ease your pain. Know I do understand your loss. Allow yourselves time. Time to grieve. And know, there is no time limit on grief.
May the road rise to meet you. May the wind be always at your back. The sun shine warm upon your face. The rain fall soft upon your fields, And until we meet again, May God hold you in the palm of his hand.

I want to send the family of Layne’s my deepest sympathy. I know that you know how Blessed you were to have such a kind hearted, loving, humorous, intelligent and true Christian man as your fearless leader (Layne might laugh at that from Heaven). I didn’t get to know Layne as long as most but he allowed me to help in promoting his books, The Scaries. I had fun with Layne and Marie when we filmed a scene that went with the books. I got to be a star for a day. God Bless this family!

Marie, Sam, Katie and Gracie. We send our deepest sympathies over you loss. I was Laynes uncle in law for several years and always enjoyed being around him. CW, Monika, Joey, Maggie, Floyd Michael, Jared Tooley and Kay Tooley

Marie and family, keeping you and your family in my thoughts and prayers. I am so sorry for your loss.