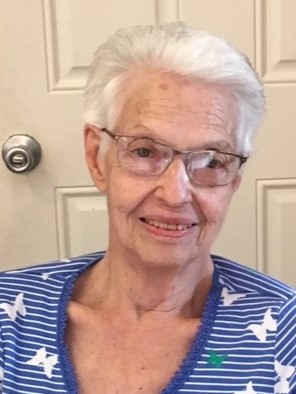 She was born Dec. 11, 1931, in a farmhouse near Windom, Kan., the daughter of George and Alta Marie Smith Hunsinger. She was the oldest of eight children and attended Look Out School – a one-room school house before graduating from high school in 1950 from Little River. She worked in the Little River grocery store for several years after high school. She moved to the ‘big city’ of Topeka with sisters JoAnn & Kay and worked at Pelletier’s Department Store. Georgene married and had three girls but later divorced, and was a stay-at-home mom who also watched a few neighborhood kids. In the 1970’s she went back to work at Pelletier’s before beginning employment as a vehicle registration clerk for the Kansas Department of Revenue, and retired in 1997 after 21 years of service.

Debbie, Sheri and Jan
I’m so sorry to hear about your Mom. She was always so sweet and kind to me. I think she babysat me a few times, and I babysat you three at times. We used to play together with Bill Bentley in his backyard. Do you remember Billy’s “Danny Raccoon“? Growing up in Oakland was a privilege with many happy memories.

We are so sorry to learn about your mother’s passing. Monterrey Village created a family for those of us who had loved ones there. Debbie, you were always there to support your mother and she loved having you with her. We wish you peace and comfort.
Steve, Marcia and Donna Riley

Georgene will be missed by all the staff at RestWell Home Plus. She was a lovely lady. Thank you for allowing us to care for her. Lots of hugs and prayers.

Debbie, Jan & Sheri,
My heart goes out to you as your grieve the loss of your mom. I’m so glad I got to know you & your mom while she was at MV. You are like a part of my family. May good memories of your mom bring you comfort. Many hugs and prayers for you.

Georgene will be truly missed by all who knew her! Days with Georgene were never dull. I enjoyed all the time I got to spend with her, while caring for her at MV! May she Rest In Peace and my prayers/condolences go out to her family!