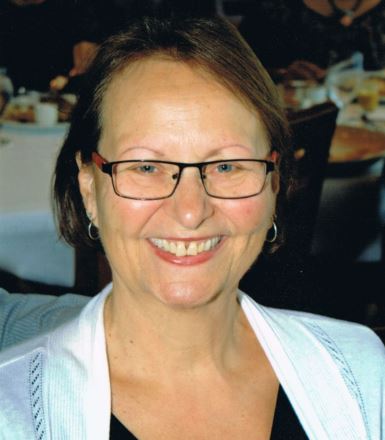 Melissa was born on May 5, 1950 in Hartland, Minnesota.  She graduated from Blooming Prairie, MN High School in 1968.  After high school she graduated from the University of Minnesota and then obtained an MBA through the College of St. Thomas in St. Paul, MN.

Her working career started in the Twin Cities and included stops at 1st Minnehaha Bank and V.I.P. Credit Union before landing at Twin City Federal where she met her future husband, Brian Kuehl, on May 16, 1984. Concluding her banking career, Melissa started her sales career first in Spokane, Washington and later in Lawrence, KS.  This included wholesale giftware sales representing Harlan Lutz & Associates in Washington and then with Pacesetter Enterprises based in Overland Park, KS.  She concluded her working career at a gift shop in Lawrence, KS and then by working part-time monthly for the U.S. Census Bureau.

All that work led Melissa to the “best job I’ve ever had” and that was retirement.  After a 12-year friendship, sometimes from afar, Melissa married Brian L. Kuehl on September 21st, 1996 in Coeur d’Alene, Idaho.  She joined Brian in Lawrence, KS at that point and they began plotting the road to retirement.  Melissa’s came in 2013 followed by Brian in 2015.

Melissa’s Facebook page says it all:  Recreationologist and vacation specialist.  Prior to and upon retirement the world had become Melissa’s and Brian’s to conquer.  They traveled to all 50 states, 34 of the 50 state capitals, 28 National Parks, all of the presidential libraries, all the major league ballparks, Australia, Europe, Asia, Antarctica, South America, Iceland, China and Cuba.  And they were just getting started.

In between travel, Melissa enjoyed volunteering for the League of Women Voters of Lawrence Douglas County, as an usher at the Lied Center and she loved selling cookies and concessions at Theatre Lawrence. She also volunteered at Audio Reader reading gardening magazines for a blind individual.  She joined the local chapter of the NAACP and belonged to several book clubs.

Melissa also had many nieces and nephews, great and great-great nephews and nieces.

She is preceded in death by her mom Louise Wick, her brothers Kerry, Wayne, Jeff and baby Bruce Wick and a sister Elizabeth (Betty) Fuhs.  Also preceding her was her sister-in-law Donna Wick and nephews Rodney Spooner and Justin Peterson.

In lieu of flowers, consider a donation to:

Later celebrations of her life will occur in Minnesota and Spokane, WA at a date and time to be determined.

Our deepest sympathy and condolences. Melissa will be greatly missed. She was a bright star 🌟 .
Laurie & Perry Higman

Dear Brian, I hope that your happy memories will flourish always. My sadness is profound. Melissa was a wonderful friend and a wonderful citizen. I have years of memories of her compassion, dedication, perseverance, helpfulness, joy, and wit. Love and best wishes always.

I am deeply sorry to hear of Melissa leaving this world way to early. I first met her through my store in downtown Lawrence as she was a rep for many of the products we sold. She was always so upbeat, cheerful and just a beaming light in any room. We crossed paths many times over the years and shared several volunteer events together. We are all so lucky to have known this vibrant, wonderful woman. She was truly one of a kind.

Melissa’s life is truly a “celebration” of life. From my experiences as a brother-in-law, she embraced conversation of any topic as means to persuade or give very valuable information as she was well read. She was very good listener and never hesitated to sell an idea. I will miss these qualities she freely gave. Additionally, she seemed to embrace challenges (this past year is a good example of this with her health) and was tough card player to beat! Most of all she seemed to enjoy the journey of life (witness the many travels of Brian and her over the years). Her new journey will be begin with the same passion she seemed to embrace on this earthly one. Love you Melissa!

Brian, I am very sorry for your loss. Melissa was a kind and remarkable woman. She will be missed.

Ruth and I met Melissa while traveling. She recognized that we were from, Lawrence and introduced herself. She did great work for the League of Women Voters. She was always kind and cheerful.

I’m so sorry for your loss. Melissa was a dedicated volunteer of Tax-Aide for seven years. I knew I could always rely on her. She will be missed. Take care, Brian!

Brian, I’m so sorry for your loss. I will miss seeing Melissa at TL. Thoughts and prayers are with you and your family.

Melissa was a vivacious and energetic person. I met Melissa when she did voter services for Lawrence League. Her activities continued even when she became ill. Melissa will be very much missed in this community. God speed in your next adventure.

I spent many times talking with Missy at school and may God Bless!

Brian and family: I’m so saddened by Melissa’s much-to-early passing. I will always remember her enthusiasm for life. She always made our book club come alive! Rest in peace, sweet Melissa!

Brian, I’m so very sorry for your loss. I enjoyed working as an usher with Melissa at the Lied Center. She always had a smile on her face. Praying for comfort for you.

Brian, I am so saddened by Melissa’s death. She was always such fun to be around at Theatre Lawrence. I am so glad that you and her got to travel to all the places that you did. May you be comforted by the many warm thoughts of those who care.

From Mary B Weathers...

Brain-word spread fast in Spokane to much sadness and remembrance of the wonderful times we had with Melissa in Spokane. She was a truly wonderful individual who will live in our hearts forever.

Brian, your loss of Melissa is immense. I am deeply saddened and hope your strength and love for her will help heal the deep hole in your heart. I only knew Melissa for a much too short time through League Of Women Voters, where she guided and inspired me to fill my time with purposeful work. I will continue that work to honor her name and will keep her memory warm in my heart. Bless you and keep enjoying all the beautiful memories of your time with her. She will be greatly missed for a long long time. She was a great friend.

Melissa was instrumental in not only welcoming me to Lawrence but encouraging me and facilitating my volunteer work with League of Women Voters, and my husband and my volunteering with Theatre Lawrence and the Lied Center. We share our deepest sympathies and are so grateful for the short time we knew Melissa and experienced her friendship. She will be deeply missed.

I feel so deeply saddened by Melissa’s passing. She opened her heart wide to Everyone she met and freely mentored all members of the League of Women Voters, including me. Were it not for her cheerful encouragement, I would not have experienced memorable voter registrations with her as an expert role model and hero. My deepest sympathies to Brian, family, and innumerable friends.

Brian, I’m so sorry for your loss. May God give you strength. Prayers

My deepest condolences to Brian and Family. Melissa was a kind vibrant being whom will be deeply missed. Sending Love.