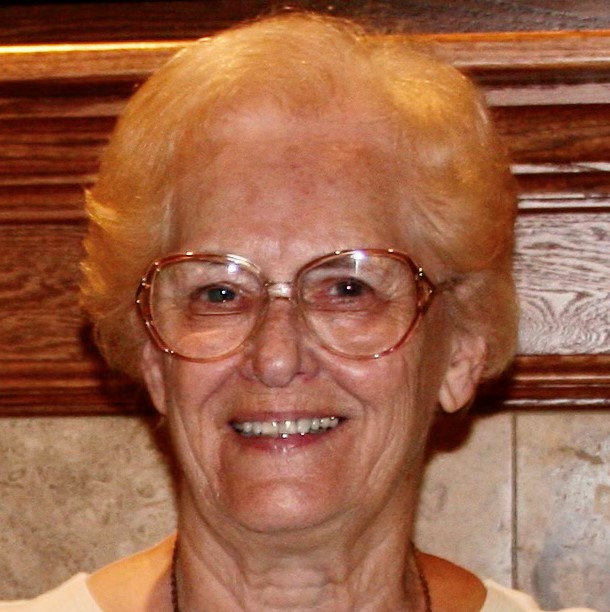 Shirley Marie Ruddy, 95, of Lawrence Kansas, passed away on July 15, 2021. She was a longtime resident of Kansas City, Kansas and worked as a nurse – first in surgery at Providence Hospital and then at a private office in Kansas City for 20 years before retirement. She was a devout catholic and a member of St Patrick’s parish in Kansas City, Kansas, then Corpus Christi Catholic Church after she moved to Lawrence in 2006 to be near her grandchildren. She enjoyed all sports, being an avid athlete while growing up, and later enjoyed watching sports, especially KU basketball.  One of her greatest joys in life was spending time with her two grandchildren and watching them perform in music and theatre.

Shirley was born on June 28, 1926, to Julia Marie (Riordan) Medill and George Tabor Medill, Sr. near Tonganoxie, Kansas.  She attended Leavenworth area schools and graduated from St Mary’s Academy in Leavenworth before graduating with a nursing degree from St Mary College in Leavenworth, Kansas.  She married Thomas Richard (Dick) Ruddy on July 29, 1950.  Shirley is survived by her son, Thomas Richard Ruddy II (Sharon Soule), grandchildren Julia Ruddy and Sean Ruddy, and many beloved nieces and nephews.  She was preceded in death by her husband, parents, sisters Charlotte Powell, Monica Russell and Lorraine Medill and her brother George Tabor Medill Jr.

Visitation will be at Corpus Christi Catholic Church in Lawrence on Saturday July 24th at 11:00 AM.  Mass of Christian Burial will begin at noon at the church after the visitation.  Burial will follow at Mount Calvary Cemetery in Lansing, Kansas.

In lieu of flowers, the family suggests that memorial contributions be made to Corpus Christi Catholic Church.

Dear Tom, Your mom was such a fine lady and loved by our family. Her devotion to my Dad was unwavering and much appreciated. I remember when she told me that she was moving to Lawrence to be closer to you and your family. She was so thrilled. I know you all will miss her greatly.

Tom, I am so sorry for your loss. Your Mom was such a kind, sweet, and caring lady. Your Dad & Mom were both the sweetest and kindest folks and the absolute best neighbors I had the pleasure knowing. Keeping you and your family in my thoughts and prayers.

My sincere condolences, Tom. Your Mom was a lovely lady and a terrific nurse.

Dear Tom,
My brother, Jay, & I are so grateful we knew both your parents. Shirley was a great friend to our mother & she certainly was a good friend and supporter to our uncle and all his patients, although, I must say, I didn’t enjoy those shots. Please know, our thoughts are with you.

I will miss our long conversations about life, our families, our childhoods, our favorite foods, KU Basketball, just everything about our friendship over the years! You were a blessing in my life and I along with countless others will miss your sweet smile! Until we talk again, may your rest be peaceful Shirley! Love, Kathy

From Bob and Dolores Holton...

Shirley was a very nice person who was easy to get along with and she was very nice to all the people she touched. Sorry for you’re loss, May she rest in peace. In our prayers, and God bless.
Ll

We all have wonderful memories of Shirley. Her love was so evident for all of you. Our hearts are with you.
-The Krannawitters

Tom – I am so sorry to know of your mom’s death . Please know I am sending comforting thoughts to your family .

My sincere condolences for the loss of Shirley. She was blessed with long life and decades of fine memories. May those memories bring comfort and smiles to all. In God’s loving care, Shirley rests. John 5:28,29; Psalms 37:29

My deepest sympathy to all of you in your time of sorrow. Shirley was always so friendly and kind to all. Sending hugs and prayers.