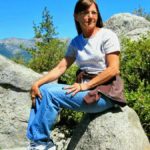 Memorial services for Vicki Lynn Anderson, 69, Baldwin City, will be 10 am, Saturday, September 11, 2021, at Rumsey-Yost Funeral Home.  The family will visit with friends following the service.

She was born August 21st, 1952, in Lawrence, Daughter of Paul Richard Anderson and Fae Ann Anderson, Vicki graduated in 1970 at Lawrence High, married in 1978 then had Nathan in 1979. Soon after divorced Chris Lang in 1981. Vicki then lived out her life in Lawrence with Nathan until moving to Baldwin City.

Vicki was a service writer in Lawrence for several years until she didn’t want to be in the automotive industry anymore and was  happily self employed until her last days.

Her absence is like the sky, spread over everything.

Sorry for the loss of Vicki. I worked with her many years ago when she was a service writer at our dealership. I really enjoyed working with her.

From Steve and Colleen Butell...

Thoughts and prayers for Vicki and her family. So sorry for your loss God Bless

So sad to hear this. Thoughts and prayers for Nathan and Vicki’s family. She will be missed by so many.

Vicki was such a giving wonderful person. She will be missed by many. Thoughts and prayers for Nathan and her extended family.

I am devastated by the loss of my longtime friend. Vicki was a friend for over 50 years. Together with our other “Dorm girls” we have supported each other through everything life has thrown at us. The most recent was Vicki’s battle with ovarian cancer. She will be forever in our hearts and memories. Our prayers are with Nathan and family during this difficult time.