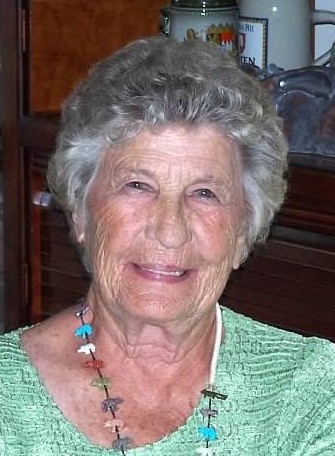 Services for Martha “Marcie” Jean Clester, 93, will be at 10:30 am on Wednesday, September 22nd at Immanuel Lutheran Church in Lawrence, KS. Burial will take place at 2:15 pm in Mount Hope Cemetery, Topeka, KS.

Martha was born April 14, 1928 in Deerfield, KS – the daughter of Carl and Stella (Hutton) Marquardt. She graduated from St. John’s Academy in Winfield, KS in 1946. She attended Southwestern College in Winfield, KS and became a Medical Technologist.

Martha worked as a Medical Technologist at Snyder Clinic in Winfield, KS and at Cotton O’Neil/Stormont Vail in Topeka, KS. She worked until she was 84, after returning to work from retirement.

Martha enjoyed dancing, traveling, gardening, and KU Basketball. She is perhaps most well known for her ability to host and entertain, whether it be a holiday party or an apple-picking gathering in their orchard.

Memorial donations can be made to Immanuel Lutheran Church in Lawrence, in care of Rumsey-Yost Funeral Home, 601 Indiana St., Lawrence, KS, 66044.

Marcie was one of the smartest, sweetest Med Techs I have had the privilege to work with. She was a gem. Keeping all family of her in prayer.

I met the fun-loving-dancing Marcie for the first time at the Sunday evening OURS Club dances in Lawrence. Yes, she was a hoot and she surely did know how to have a good time! A delight in any crowd, she was. And I was delighted to learn that she shared my profession. We could have swapped some good stories I am quite certain!

Leo Shaw and I send our love and condolences to her family and friends as she travels on to a new adventure!
Eugenia Bryan

I will always remember the stories she used to tell Cari Jo and me when we were teenagers. She was a hoot!

Marci was the sweetest most fun loving person I have met. She definitely got into those KU basketball games! She will be missed. Our love & prayers are with her family.

I’m so sorry to hear of Marcie’s passing. My thoughts and prayers are with Marsha and her family.

From Rik and Nancy...

From Sheri and Bob Cooley...

We loved her dearly and had so much fun when we were together. I will miss talking to her on the phone and seeing her. Aunt Marcie I know you are in a better place and you will stay in our hearts forever. Rest in peace my wonderful Aunt.

Sending love and prayers to the family. She was a blessing to all of you and I know she will be deeply missed. Hold close in your heart all of the memories and times you shared together.

My deepest condolences to Marsha and her family, I am sorry for your loss. Marcie and her husband Bob were close family friends and I miss them.