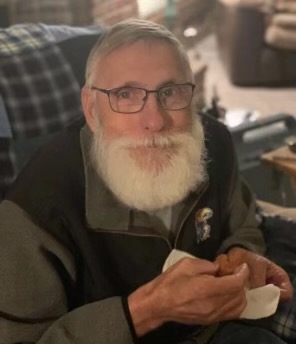 He was born June 5, 1948 in Goodland, Kansas to John Joe Hoss and Erma Elvada Anderson.

His family settled in Bunker Hill, KS where he attended school. In November 1965 he joined the U.S. Army where he served as a firefighter and was stationed in Thailand during the Vietnam war. He was honorably discharged October 30, 1968.

Roger then went on to work in the Oil Fields and drove an 18-wheeler for most of his life. He worked for various companies until he retired in 2016.

He was united in marriage to Diane Weber of Russell and had one daughter, Sherry Lynn Baier. She gave him two grandchildren, Andrew and Kressa.

He was preceded in death by a brother Terry Hoss, his parents John and Erma Hoss, a brother-in-law Jerry Novotny, several Aunts and Uncles, and his beloved dog, Jersey.

Roger is survived by his ex-wife Kathleen, all 5 of his children and 11 grandchildren, a sister Judy Novotny, and a host of good friends.

A Celebration of life with a Military Honors will be held at 4 pm, October 23, 2021, at Fossil Creek Hotel, Rusell, Kansas. A dinner will follow the service.

Any donations should be directed to the Russell, KS VFW, sent in memory of Roger Hoss.

Rodger was always smiling and laughing. Like a third uncle to me. Loved seeing at the shop in Russell. Our condolences, he will be missed

The day that I came into work and heard that I had moved on was a terrible day it hit me hard and still does I will for ever miss u friend! Thanks for always cheering me up and talking to me and thanks for always being outside when I came into work talking about my cars I would bring to work and my loud music miss seeing your face as soon as I walk in the door! RIP Rog

Still hard to believe you’re gone, the silence is deafening. You are so very missed by all of us. RIP my friend.